As part of a collaborative Problem-Based Learning (PBL) laboratory course being undertaken within an Entente Canada-Quebec project, we are creating an online cooperative science platform between students in the Gaspé and students at John Abbott. The whole project relies on determining the appropriate software platform that allows the two groups of students to intuitively communicate and work together. In order to test the use of both Google Docs and Moodle forums for writing an on-line collaborative lab report, Murray solicited the help of his colleagues at John Abbott College to conduct a two-week pilot study. Two Honors science classes, kindly volunteered by Roberta Silerova, were, thus, used for our test study. They were asked to evaluate the collaborative potential of both Google Docs (week 1) and Moodle Chat and Forum (week 2). Furthermore, in an exercise separate from the Moodle and Google Docs testing, a small group of students in the class was asked to critique the problem-based project that will be assigned to our students this winter. On-line evaluations (Google Spreadsheet) concerning both Google Docs and Moodle were sent out to our students, and these were analyzed during our weekly Skype meeting.

From the first class experience, students really enjoyed working with Google Docs. Perhaps the most interesting responses were to the question on whether their overall experience in using Google Docs to write your group lab report was positive, fun, and engaging. 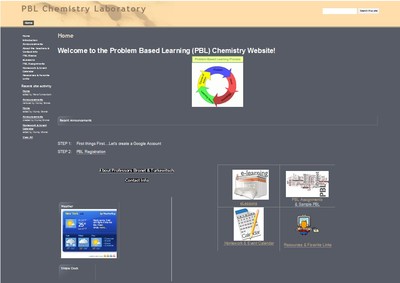 Screenshot of the Pretesting Google Site 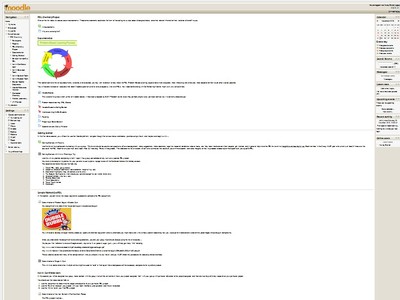 Screenshot of the Pretesting Moodle Site

The responses below reveal the overall satisfaction with this application. There were no overtly negative responses.

I enjoyed this method because we were able to edit the document as a group. I think it would be very useful when working with people who are far away and I would definitely do it again for a group project. The only technical aspect I found irritating was the equation editor, which was a little temperamental. It was difficult/tedious to add subscripts and superscripts. Other than that, it was a good experience.

I think that the use of Google Docs for lab reports is really good. The only thing that was difficult was not being able to talk to my lab partners is person. When they were having trouble, it was hard for me to help them and for them to help us through writing. If we would have been able to talk to each other while writing the kinetics lab, I think the experience would have been even better! Other than that, I like using Google Docs because it's easier to transfer information to each other and there aren't several files open for one lab report. The use of Google Chats is also helpful when doing labs at home because it simplifies planning when we're not together, so I do like the Google Chat in that respect however.

The following week, students worked with the Moodle site that we designed for our upcoming Winter course. To test the Moodle Forum and Chat functions, the students were asked to comment on a sample PBL document that was written to provide a worked-out example of a problem-based lab report to our students. In addition, they were asked to consult announcements, pictures, chats, forums, assignments and wikis. The students rated their overall experience with Moodle to be as not as easy or as intuitive as with Google Docs. This result was surprising to us, because we felt that our Moodle site was very complete and comprehensive, in addition to being designed to meet our pedagogical goals.

Too much trouble, in my opinion. I would stick to Google Docs. There is already a message system and a comment system integrated in the program. Using Moodle is very time consuming and a little frustrating. Google wins over Moodle!

I really did not like Moodle but I think it was because I really did not understand what we were doing. I think this might be much more productive if you took a class and demonstrated to all your students how it works while everyone one has a computer and go through the basics together.

It was fun, if in somewhat of a novelty way. It would probably be more of distraction than an actually learning tool. It may just be easier and finicky (due to the trouble navigating and technical issues) to just stick with paper copies and such.

Students didn’t like the Moodle Forum for several reasons. First, they had to scroll down to the end of all the posted comments in order to add a new comment. Secondly, the different conversations were not divided by topic. Finally, the students did not like the fact that they had to continually refresh the page to see the modifications made by other team members.

Even though we had already invested a lot of time in building a Moodle site for our course, following these trials, we began to create a Google site to replace our Moodle site. In no way should our results be interpreted as a general condemnation of Moodle. It should be kept in mind that we tested a very specific and specialized application of Moodle in a virtual PBL environment, and in this situation Google Docs better suits our needs.

The pilot testing was really key for us, because our whole project hinges on having students work both collaboratively and at a distance on the same problem-based project. As a result, we have completely changed our orientation in terms of the platform we will use. We, therefore, believe that it is critical to pre-test applications when information technology is to be used in the classroom or scientific laboratory setting. Such pilot studies represent a valuable addition to any pedagogical plan for integrating technology into courses. How do you test the technology that you are planning to incorporate into your classes?