Created by the University of Rochester, the Webwork Platform is a pedagogical tool used by Mathematics and Physics teachers to assign problem sets to students via the internet. The problem sets can involve multiple-choice questions and numerical problems using random number generators so that all students have the same type of problem, but receive different numerical values for it. Professors can limit the number of attempts each student has per question and choose assignment start dates/times and end dates/times. The strength of the system is that solutions for each student are accurate for their given numerical values. As well, the software allows professors to monitor when a question is attempted for the first time and how many attempts were required to find the correct result (or the number of attempts by the time the assignment ends).

Webwork can be used to create homework assignments that are computer graded saving instructors hours of drudgery. Due to instantaneous feedback, students can monitor their progress while learning, which promotes self-regulatory strategies. Professors can also monitor students' progress, enabling instruction adjustments.

At Vanier, we have been using Webwork to develop not only standard physics problem libraries but problems that embed Flash and Java simulations found on the internet. For example, a Flash physics simulation concerning waves and oscillations, distributed by the University of Chicago, is embedded into a Webwork assignment problem. The addition of these simulations and the questions that they engendered allowed students to experiment with the functionality of the explained principles which seemed to me to be useful in an online pre-lecture preparation context.

Traditionally, a topic is covered in class and then homework is assigned, however, recently I explored the value of assigning homework sets to students before topics were introduced in class to see if this led to a better quality of discussion during class time. My physics colleagues at Vanier College and I felt that this would allow motivated students to voluntarily explore the topic on their own and that such students would read ahead and attempt the problems. Consequently, these students would be in a position to lead the class discussions and increase the quality of class peer discussion which would lead to academic success. 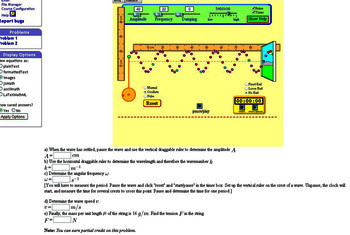 A simple harmonic motion simulation embedded in a Webworks question.

In order to verify the hypothesis, the 40 students enrolled in the Vanier College Honours Science program were chosen to participate in a study. These students were enrolled in their first semester Mechanics class, and the study was conducted during September and October 2010.

In the traditional format, a Webwork assignment of 12 questions was assigned to the group on a Wednesday following the Monday and Tuesday lectures covering the topic in the assignment. The questions included algorithmic problems as well as conceptual problems inviting exploration of a concept via simulations. The assignment then ended the following Wednesday evening. 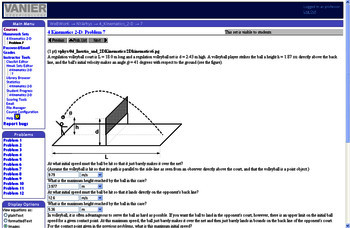 A week after, in the proposed format, a Webwork assignment of 12 questions was assigned to the group on a Wednesday prior the Monday and Tuesday lectures covering the topic in the assignment. The assignment then ended the following Friday evening. In both formats, the number of attempts for each question was unlimited. After the assignment was posted, the professor would answer all questions asked by students, even via e-mail during the weekend. 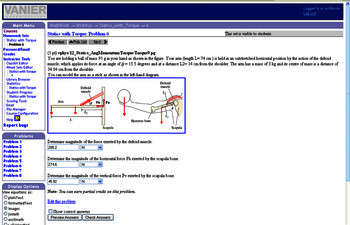 A statics Webwork problem involving forces and torque applied to an arm - Click for more detail.

In the proposed format, 14 students (35%) attempted the Webwork assignment before covering the material in class. The classes that followed had better quality in-class questions than in prior classes. I also found that the classes were more interactive and focused on physics problems; they were more conceptual and less mathematical. The discussion for torque focused on the dynamics of a bicep curl, riding a bicycle and draw-bridges, and less on τ = r x F. Kinematics brought on sports discussions of tape-to-tape passes in ice hockey and corner kicks in soccer.

To conclude, the proposed format did allow motivated students to explore the topic on their own. The motivated students actively participated in class discussions, and most did well in the first class test. However, it must be pointed out that some students who did not attempt problems before class were still leading the class discussions and did well in the first class test. Ultimately, for me, the fact that the classes were more interactive and conceptual is enough for me to continue with the proposed format. I am looking forward to integrating this approach into my other physics classes in the future.

Share your experiences using Webwork or other platforms for math and physics with your colleagues from around the province.