Keeping students focused and motivated is a constant challenge for teachers, especially in classes where a lot of the material has to be learnt by heart. An effective way to address that issue is to turn review sessions into games: the informal context allows students to relax and the friendly competition keeps them motivated. The web-based application, Factile, which I have used in my English for Adventure Tourism class, allows you to turn your classroom into the set of Jeopardy and make your review sessions efficient and entertaining.

By the last hour of a full work day, most people have the concentration of a homeopathic treatment. That fact is especially true for students in the more action-oriented fields of study who are used to moving a lot in their day-to-day life and tend to get restless after sitting for too long.

In the winter 2018 semester, I taught English for Adventure Tourism for the first time. For my first few classes, I tried to fill their 4 hours of class with lectures, exercises, or readings. I soon realized that after 2 and a half hours, absolutely nothing seemed to get through to my students.

As a field-specific ESL class, English for Adventure Tourism is heavily focused on vocabulary, which inherently involves repetition. Because of this need for repetition, I started keeping the last hour of my class for review; I thought that working with material that was already familiar to the students by that point would make it easier for them to follow. Additionally, I started using games in these review sessions so that it did not feel like hard work to my students.

In my early attempts, I gave the students some rewards for winning the games such as cupcakes or bonus points on the next class’s short quiz. However, I quickly noticed that, as most of my students had a background in sports, the most successful games were the ones were they were competing against one another; even the most lethargic students in the classroom suddenly became deeply involved when there was some friendly competition.

Throughout the semester, I tried a variety of vocabulary review games:

While all those games were successful at getting my students motivated, they all had the same problem: they required a lot of preparation and were wasteful, using paper cards that were bound to get crumpled, torn, or lost.

My last, and most successful, attempt at integrating games in the review process was done with Factile, a website that allows you to create a Jeopardy-type game board with categories and wagers, using your own questions and answers. The free version lets you create text-only quizzes; the premium version, at $5 per month, allows you to include pictures and video or audio content. 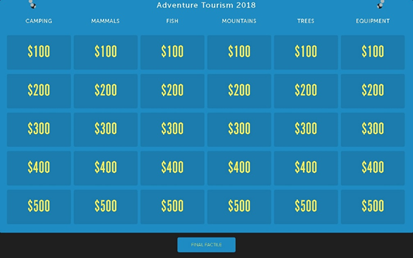 The Factile game board I used for the final review in my English for Adventure Tourism class.

Once you have created a quiz, the website allows you to create a game room and choose a number of teams between 2 and 12, and gives you a four-number code that allows your students to join the room using their cellphones.

After logging onto the website, they can choose their team’s avatar and then their cellphone’s screen becomes a big button that acts as their team’s buzzer. Incidentally, it might be a good idea to select the heaviest cellphone users in your classroom to be the team captains as it prevents them from doing anything else on their phone while the game is ongoing. 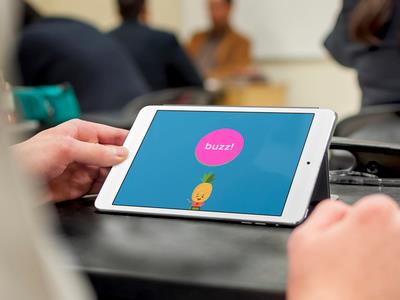 For the duration of the game, the student’s cellphone or tablet is turned into a buzzer.

With everyone logged in, the teacher takes on the role of a game show host and clicks on the categories and wagers to reveal the pre-written questions. The game tallies the earnings of each team automatically, but the host has the option to take points away for a wrong answer or to give bonus points.

In my case, as it was a global vocabulary review, I divided my board into broad categories we had covered since the beginning of the semester: camping, mammals, fish, mountains, trees, and equipment. I used pictures as visual clues and put words I knew were easier (tent, moose, slope) under the $100 wagers and words I knew to be more difficult (Billy tins/cans, vole, ridge) under the $500 wagers.

Overall, the students’ response was fantastic. Students who were normally subdued were on the edge of their seats, cheering for every right answer their team got. Those who were generally too shy or nervous to talk in class contributed freely in this more informal context.

The only complaint that I received about the game was that because the Wi-Fi reception differed from cellphone to cellphone, some students felt that their buzzer was not as responsive as that of the other teams’. And, to be frank, the “my buzzer is broken” complaint happens in any competitive quiz game and should be seen more as a testament to how involved the students had become than a legitimate complaint about the game.

Simon Côté-Massicotte Simon is a writer and editor at Profweb and teaches ESL at CEGEP Limoilou. Passionate about literature, he holds a bachelor’s degree in English Studies from Laval University. Driven by a desire to improve the learning experience for his students, his techno-pedagogical interests include active learning and gamification.