I've never liked flow charts and mind maps. They're supposed to simplify things (I think) but I find them confusing. So when I took a Performa course by Christian Barrette, an expert in concept maps, I was really stepping out of my comfort zone. But that's when I learned that while a concept map resembles a mind map, it's much different. During the course, I had to develop concept maps I could use with my students and I became so enamoured with their potential to help students learn, that they became the subject of my master's research paper. I've since used them regularly in class and the results have been quite positive.

What characterizes a concept map?

Here is an example of a simple concept map:

Example of a concept map answering the question “What are nouns?”

Concept maps are very useful for deeper learning because the verbs that connect the concepts create meaningful relationships. For instance, one can learn parts of speech by reading the definitions in a list. However, a concept map allows a student to learn several parts of speech and make connections between them. Learning thus becomes more meaningful and information is more easily retained. It's also important to keep the concept map relatively small, because the brain can only absorb five to nine new concepts at a time.

Do concept maps have their place in language teaching?

Most definitely! Language is about communicating and fortunately ESL classes today have little to do with the rote grammar teaching that was the norm many decades ago. However, I firmly disagree with the communicative approach that encourages implicit-only language learning.

Learning one's mother tongue from birth is not the same as learning a language at school and research shows that as people age, their ability to learn a language implicitly becomes impaired, while explicit learning can happen at any age.

Incredibly, the failure rates in CEGEP English classes are the highest in the lowest level of English, and after 25 years of teaching, I've concluded that the lack of explicit language teaching throughout primary and secondary school has done students a disservice. Many are failing a course where the focus is on the most basic elements of English that they have supposedly been learning implicitly for close to ten years.

For example, most low-level English students at CEGEP struggle with knowing how and when to use the simple present or the present progressive. If only one tense is being practised, they do fairly well, but if asked them to talk about themselves, they are rarely able to correctly use the appropriate present tense without help.

So, I wondered then if concept maps could help them gain a deeper, more intuitive understanding of the 2 tenses by comparing them from the start. Instead of teaching just one tense and then the other, I would use concept maps to teach them both at the same time.

How can concept maps be integrated into the course?

In preparing the concept maps, I took the following factors into account:

While a concept map is most effective when created by the learner, I could not expect the students to create their own without using valuable class time teaching them how to make them. Instead, I made fill-in-the-blank concept maps using Cmap Tools and had the students complete them as reinforcement of what they'd just been taught.

The following table summarizes how I use them when teaching the simple present and the present progressive, a process that takes 4 to 5 weeks:

At first, students are not sure what to do with the concept map. They need guidance and especially need to learn to read the concept map as sentences, not just randomly fill in the blanks. Here is an example of one of my concept maps.

How do I express present events in the affirmative in English?

Complete the following concept map by choosing from this list of words: every day / are / present progressive / now / usually / s / simple present / am / this week / once a month / ing / today / is 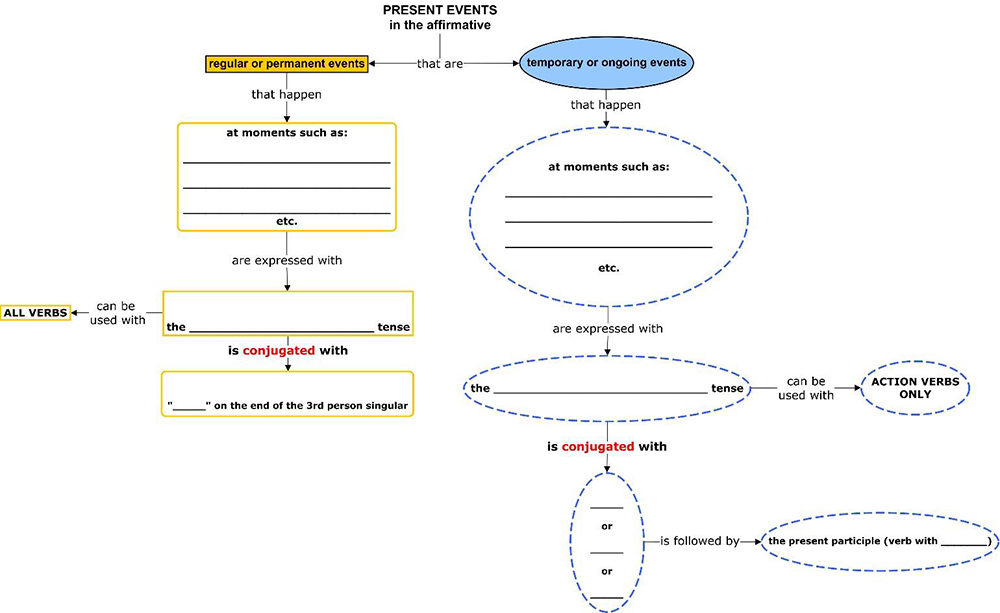 The shapes and colours are the same in each concept map. Each map builds on the previous ones so there is a lot of repetition. Communicative activities are also done weekly to reinforce the notions.

Concept maps are not a magic solution and won't help a student who is not motivated to learn. However, while I don't have a quantitative study to prove they work, my observations suggest they can significantly help the students who make an effort to practise and study. I saw higher results on grammar quizzes and better use of the present tenses in the writing of those I considered to be serious students and a small focus group of students said that the concept maps helped them.

I currently use concept maps for verb tenses and modal auxiliaries at the lower levels of English, and I use some to reinforce the structure of essay writing at the higher levels. But the possibilities are endless. When done properly, concept maps are a great tool to help students learn many aspects of language learning.

Susan Drolet She has been an ESL teacher at Cégep Garneau since 1994, teaching over 15 different English courses and acting as a program representative and department coordinator. She is the author of Technically Speaking and holds a BA in English and French Literature from McMaster University as well as a Master of Collegial Teaching from the Performa program at the University of Sherbrooke. She enjoys experimenting with various technology tools to enhance learning and recently worked with colleagues to develop an interactive online ESL course on Moodle offered at Cégep Garneau. But while she believes that the many technological bells and whistles can make the ESL classroom more engaging, she also considers it is more important to connect with students to create a healthy classroom atmosphere and says that she's finally learned not to take herself too seriously.

Publications related to
Languages and Literature