I teach Computer Science at Concordia University. Within the discipline, my specialty is mainly the first year courses, the programming courses. I teach things like JAVA Programming and a C++ course which is my one online course for the moment. These are large classes which have students with varied backgrounds.

These students are challenging because you don’t know what prerequisites they’re coming in with. The thing that happens a lot in computer science is that we have first year students who are what I call self-taught. They want to program a game, and they learn what they need to do it. Unfortunately, they don’t always use the best techniques. Those are sometimes the most challenging students because you have to have them unlearn what they’ve learnt in order to show them the proper way. Then, you have those who are true novices, who have never done any kind of programming. They decide that they’re going into programming because they have a Math background and off we go! You’ve got a varied set of needs and students who are learning at different rates.

The other challenge that we have at Concordia is multi-language issues where English is not the first language for many of our students. This is where the whole idea of a lecture capture started off. Close to ten years ago, I was attending a workshop at McGill through our Center for Teaching and Learning Services here, and I saw somebody demonstrating Camtasia. I thought that I could use that for my classes, recording my lectures to have them available for students, especially those that have an issue with the language. They could listen as often as they liked.

At the same time I was working on my Phd in EdTech, so one of the things I wanted to do was set up what I guess is now called a blended learning environment, but in those days I was merely establishing an environment for students to complement or supplement what was happening during the face-to-face classes. There are a lot of different definitions of blended learning, so anytime someone talks to you about blended or hybrid learning, you have to ask them what they mean. Which blend!

In my case, it was a regular face-to-face class which had components or learning objects on the side for students available from the webpage. Camtasia recordings seemed like an excellent resource. Students could come to class and not use the web stuff. They could also come to class and revisit some things, make-up the occasional missed class, or not come to class at all, if that’s what they wanted to do. The whole idea was to see what was going to happen. But before I could put theory into practice, I had to learn the nuts and bolts of using the software. Once Camtasia loaded onto my laptop, it took about a month to get a respectable recording online.

Learning to Use Camtasia Headless!

There was also a learning curve on how to present video captures to my class. When I started off, my lectures were being recorded, videotaped, if you want, live because we were producing two versions of the lecture capture. We had narrated slides for one version, and then we had the same thing with what I call the talking head. The narrated slides with the voiceover, I produced myself with Camtasia. The talking head was being done by our EdTech department, so there was a crew taking care of doing the merger of those two formats. The whole experiment was to see which version students would prefer. The logic being that the talking head is more like what’s happening in the classroom versus just hearing the voice and seeing the writing. For your information, it’s not worth doing the talking head. At first, students went for the novelty, but then they all ended up using the voiceover narrated slides. Furthermore the headless version is much cheaper to produce.

After making recordings for two semesters, we picked the best videos of the two terms and created an online version of the course. The narrated voiceover of PowerPoint slides that were produced with Camtasia were and still are the ones being used for the online course. The PowerPoint slides I use are not complete. In Computer Science, we solve a lot of problems in class, as in most science courses. Often, I have a slide that just has the text of a problem. There’s no solution shown; we solve it in class, however, instead of using the blackboard, what I’m doing is writing it out on a tablet.

And that’s what’s being recorded. I use a standard PC tablet which links to the projector through a VGA cable in our classrooms. This way I’m always facing my students because I don’t like turning my back to them. I’m always checking the eyes to see whether they understand as I’m explaining something. I use clickers as well for a feedback mechanism. The clickers’ results also appear on screen, and it all happens at the same time. Camtasia is in the background recording everything, the slides and the oral explanations that go along with them, my written explanations and the clicker results of in-class questions. 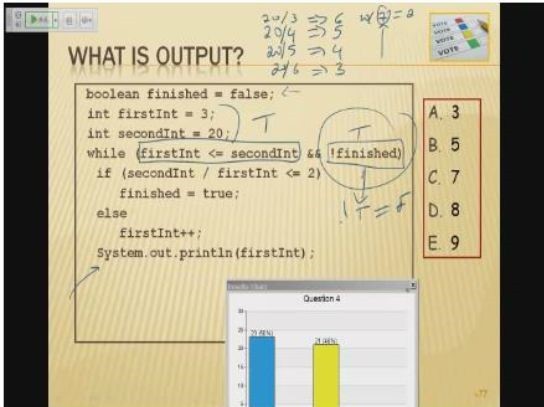 A Screenshot from a Video Capture made with Camtasia.
A PowerPoint slide presents a problem, which is solved by the author using her tablet, and the class response to the question is indicated using clickers.

I was the Camtasia pioneer in my department. There was a bit of a learning curve. Having a Computer Science background helped a little as well as being a bit stubborn, which helped a lot! Using Camtasia hasn’t really changed what I do in the classroom, but it has changed the way my students can access that information. If we can use technology to improve students’ abilities to understand what we teach, then we owe it to them to try whatever it takes to deliver that information more effectively.

Publications related to
Language of Mathematics and Computer Programming