Last year, I gave a blended French as a second language course using the VIA platform for a synchronous online lesson every second meeting. As part of their mini-grant program, APOP generously allowed us to use the platform. For many of these students, this was their first experience with e-learning. We experimented with interactive tools on the VIA platform, for example: chat, polls, and a whiteboard to enhance interaction during an online language course. Here are a few simple rules that I learned from this experience.

The first online class using VIA was organized in a language lab with the in-room support of our Educational Technology coordinator and APOP’s Project Manager online. After introducing the platform to the students, we had our first lesson, a review, since the first objective was to make sure every student could use VIA properly with confidence. It is extremely important that this experience be positive because it sets the tone for the entire experience.

Most of the students very quickly adjusted to using the various features of the platform. Following online lessons contained a variety of activities to help students develop various skills in French. Here are the main tools we experimented with using VIA during this project:

Headsets and webcams – The use of a microphone was optional for students and not every student had one. Among those students who had the equipment, not all were comfortable speaking during this course which might be related to the fact that the communication was in their second language. Although we realized that the headset and the webcam were not the only way to interact with students, this year they will be mandatory to give them the experience of speaking online in their second language. 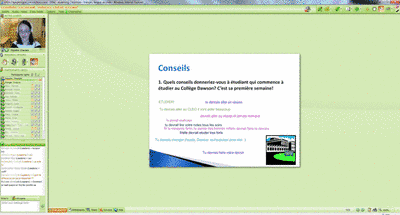 The whiteboard - The most popular and useful tool surprisingly turned out to be the whiteboard. Before I tried it, I wondered how I would use this tool and if it would be convenient for 25 students writing on the same page at the same time. After using it in the context of a language course, I have realized that it was a wonderful method to allow them to try what they had learned without being afraid of making mistakes. They actually did say they felt less shy communicating online than in class. Consequently, they wrote more in French and although it was not reflected in their final grades, I perceived that my students were more comfortable and more enthusiastic writing in French after this experience.

Chat – Chat wasn’t used pedagogically during this course but served mainly to communicate with technical support.

Polls – I have used the poll in VIA for different purposes such as checking students’ understanding of a concept with a quiz question or asking them for their opinion. One advantage for the students was that they could see how a given question was answered by what percentage of the whole class. From the teacher’s point of view, the poll was an excellent tool to check if all the students were present. Although absences were not really a problem, polls were also a good way to keep students alert and enhance their online participation. 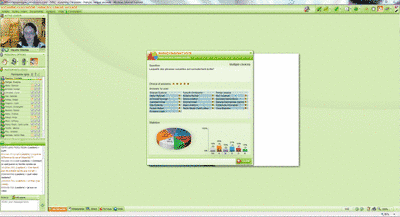 Results of a poll visible to students and teacher

Video - The video was used only once a while, not only for listening activities, but as a way to introduce variety during the online course. The inclusion of multimedia activities was appreciated by most of the students. However, the source of the online video had to be carefully chosen to make sure every student had the proper software to access the video in real time.

PowerPoint – PowerPoint presentations were used, not only to show content, but also to make students interact. In fact, saved as a regular file (not PDF), students could add comments on some slides by adding text or signs. Of course, to do so, the teacher had to adapt regular PowerPoint presentations to a videoconference context. The layout had to be simpler, because the VIA frame is already busy with many personal options. To make the lesson more interactive, more images and less text were used.

Interactive buttons - Finally, the interactive buttons such as:thumbs up, thumbs down or a raised hand were used every class for different purposes: 1) when a student wanted to interrupt an explanation by asking a question 2) when the teacher wanted to enhance the participation of the whole group by asking them to react to a specific point or 3) when the teacher wanted to make sure the group understood before adding something new because the online context doesn’t allow you to see facial expressions as easily.

After using VIA for two semesters, I found the platform user-friendly. Students were very excited about taking some classes online. Unexpectedly, I came to realize that I knew more about my students at the end of the online course than at the end of a face-to-face course. The interaction with students was authentic, and, even online, I could really sense what they had in mind.

In face-to-face courses, even if we teachers see students’ gestures and facial expressions, we do not always know what they really think or if they understood what was just taught. With VIA I could instantaneously see their answers live, and I could react immediately and adapt my explanations and examples. I felt I could follow students more accurately in their learning process.

As part of my mini grant with APOP, I was able to offer an online workshop to French teachers who wanted to be introduced to VIA. After their participation in the workshop, some of them are preparing their own online course for next year.