Home » Publications » Real Life Stories » The Scene of the Crime

The Scene of the Crime

Maybe because I was the go-to guy for technology in the department or at least for the language lab, I received release time to learn how to use it and teach its use to the department. I'm interested in exploring technology; however, don't ask me to say that technology is a panacea. Use with caution!

In the Winter of 2010, three new interactive whiteboard equipped classrooms became available. I thought it might be an interesting experience, got assigned a room and went in not knowing what I was going to be doing. Essentially I had a one hour basic training session on how to use the equipment and was expecting to incorporate the technology by adapting the course that I usually give. I didn't spend a lot of time developing new interactive whiteboard specific material because if I had more than one group in any given semester, I would not likely have the equipment available for both. I wasn't interested in two preps.

As I started the course, the way that the classroom was set up seemed to be the biggest obstacle for me from the start. There's a regular teacher's desk except with an integrated computer which worked fine. Off to the left was the interactive whiteboard. On the right-hand side of the classroom was a big screen TV with the same presentation as the interactive whiteboard and then a traditional whiteboard in the center between the two screens. 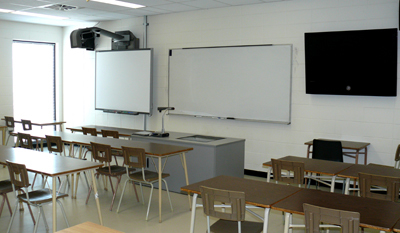 The first time I used the interactive whiteboard, which was in Week 2, the students arrived and sat randomly in the classroom. When I turned it on, there was an ooh and ahh, and everyone was really excited. When I picked up the blue-programmed marker, it wrote blue; an identical-looking green- programmed marker wrote green. I appreciated the ooh ahh moments, and the students did, and that was very motivating.

But, there was still the other factor that I was excited about which was using the interactive whiteboard to keep a digital record of what was written on the board. Unfortunately, in order for me to use the interactive whiteboard as a chalkboard, I couldn't sit at the desk. To save the image, I had to remember to go across the room to the computer to indicate that I wanted to save that image before erasing. It didn't always happen. Although it was just a question of learning to do new things in the flow of the action, I suspect that that it would have worked better if the architecture had been more convenient. I didn't use the technology interactively after the third week but only as an overhead projector. During exams I would put stuff on it, but it just slowed me down.

Now that more of my colleagues are requesting the technology, our interactive whiteboard is in high demand. Personally, I'm happy to call it an experiment that didn't work for me and leave it for the time being. It would also be interesting for me to see how the technology would work in a different physical layout which could certainly be arranged.

I guess if I could be guaranteed interactive whiteboard access on an ongoing basis for all my 101 groups or my 102 groups, then I would probably invest the time and energy into thinking about how I would fundamentally rework the course to exploit the technology rather than to use the technology to do what I already do. The real question for me is whether it is worth investing the time and intellectual energy to rework my course without having any assurance that I'm going to have access to the room on a reasonably predictable basis, and that still doesn't address the question of room layout.

I'm definitely not anti-technology. I like our new digital language lab because of the flexibility that it offers. I like that there are all sorts of things that I can do in it that I can't do in a traditional language lab. We use the new lab a lot for listening exercises as this is the prime use in our department culture. The new lab allows me to do the listening exercise that I want to do, and then allows the students who are quick and finish the material easily to have lots of flexibility to do other activities such as online grammar support or research. I really like that, and I can suggest material that students can work on at their own pace which leaves me the flexibility to circulate, help and listen to what they're doing.

Even the new digital lab, however, has disadvantages when compared to our old lab. What bugs me is that on a computer platform it takes at least five minutes and sometimes ten minutes to turn on the computer, and if there's any kind of hiccup in terms of internet access, then you're adding a whole other layer of complication. Nothing comes without some sort of price to pay. What I learned from my experience using interactive whiteboards is that the negatives can sometimes outweigh the positives. Let the buyer beware.