In fall 2012, I experimented with a team learning approach in a biology course. My inspiration for this approach was the online paper Turning Groups into Effective Teams by Oakley. Although possible without a learning platform, the strategy greatly benefited from information technology.

The centerpiece of the course was an integrative project where students had to incorporate knowledge from various disciplines. To do this, you have to form big groups. Instead of having groups of three or four, I created groups between five and eight students. My job was to provide students with enough resources to do a big long term project.

In biology, this integrative project was to build a physical model of a protein, using household materials. The models were produced by using protein-imaging software such as JMol and Cn3d to examine 3D images of protein structures from X-ray crystallography data in online protein data banks, such as RCSB PDB (Research Collaboratory for Structural Bioinformatics Protein Data Bank). It would take most of the semester to produce. To accomplish it, you actually have to manage groups very carefully.

This requires quite a lot of information at the beginning of the course on exactly what the project is about and what roles are necessary in order to accomplish the task. The task is easier if you set-up forums and allow students to communicate within their groups. 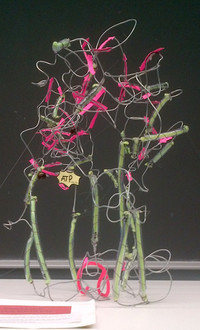 A Student Model of the ATP Molecule, part of the integrative project

I had used forums in Moodle, but with LEA in this college, I started using their forums. Already familiar with forums, I realized the importance of course management tools.

Once formed, teams were given their own forum group and instructed on how to use threads. I also used the course management tools as a basis to direct students to other resources. Pretty much the whole project was accessible online, but I gave out paper because students didn’t always look online.

Team building was done very carefully. A few team projects at the start were low risk to promote teamwork. I gave quizzes where students worked individually and immediately afterwards did the quiz as a team on paper, but if you have something technological with instant feedback of results, it could be a lot easier. Inevitably as a team, students got better results. And, individual students could see that what they considered unreasonable on the quiz, was something that the rest of the team knew. This puts more responsibility on students because learning information becomes a team responsibility.

At the end, the artifact used - which in my biology class was the model of a protein - was not worth any marks at all. Students did this hard work for no marks whatsoever, but then produced a justification or an explanation of the model that counted for marks. Students explained the process behind their integrative projects. The explanations had an individual and a group component.

Each team member rated themselves and the others as to their contribution to the team effort. And then they would take the average of what all of the members of the team had evaluated as a multiplier of the final grade. This evaluation was all shown up front. Students knew at the beginning that if you were a slacker, you would pay.

When I did a second course, a liberal arts course called History and Philosophy of Science, I used exactly the same strategies. With that strategy in place, you can relate it to any course. For the Integrative Project, teams did a picture of two scientists and their different worldviews, like Newton and Einstein, Linnaeus and Darwin, Dalton and Meitner or Priestley and Lavoisier. Just as in my Biology course, artifacts were not worth any marks, but their justifications were graded. Each individual student had to write an explanation of what the picture was about and what everything symbolized. The project received a mini-grant from SALTISE, and was presented in a poster at the summer 2013 SALTISE conference. 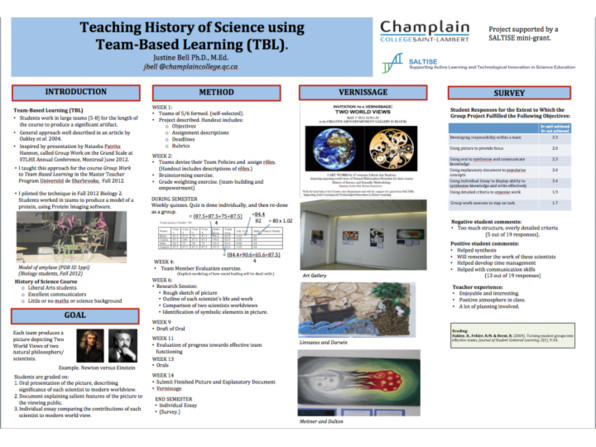 The project poster for SALTISE 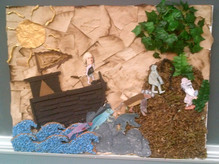 This approach gets a lot of students involved. I’m sure they spent a lot of time thinking things through in terms of the material that they had to learn. I did a survey to determine students’ attitudes towards the group project, and the responses were generally very positive. However, not all students liked it. This approach works very well for weaker members of the class, but students who get nineties because they know how to play the academic game and know how to do exam questions, don’t like something that knocks them off their routine. They may do well, but they’re less comfortable in an unusual situation.

Students who are less strong, however, are happy because they’ve previously despaired about doing well, so they’re open to new ways of doing things. They are more involved and motivated. I feel that what we’re doing is more inclusive of students with different learning styles.

Notwithstanding, I think this team approach resulted in excellent courses. Students were somewhat dubious, because it was a less familiar approach, but I think my students mastered the information presented to an unusually high level.

As well, I think I was more effective as a teacher using this methodology, and I’m absolutely convinced that my students will never forget the material that they learned because the acquisition of that knowledge was a team effort and a social process.

How does technology enter into teamwork in your teaching?