Teaching Through Simulation with Second Life

As an educator, I often feel that there is a disconnect between the classroom and the workplace, especially in the case of ACS/AEC programs. Are we adequately training our adult clientele who are already in the workforce? What if we could provide a virtual simulation that mimics real situations they will encounter so they can immediately apply their knowledge?

Earlier this year, an Associate Director from Continuing Education approached me with the news that the SALTISE community of practice was opening up to a wider range of disciplines and that their call for projects for mini-grants was looking for unique approaches to active learning. I saw this as an opportunity to experiment with simulation and decided to apply for a grant to work in the Second Life virtual environment.

Virtually Bridging the Classroom With the Workplace

For Biology students, labs are provided that roughly approximate the environment in which they can expect to work one day. However, for those students working in Transportation and Logistics, it is not so easy (or feasible) to replicate the Port of Montreal within the walls of a college. Here at Champlain Saint Lambert, our thoughts turned to simulation as an alternative for physical infrastructure.

The experimentation we originally had in mind was a virtual version of a Port where students could interact with the environment and various players. This turned out to be too ambitious and expensive to create in Second Life, so we shifted our focus to creating a simulated office space for the Special Care Counselling program. Once SALTISE had accepted our proposal, the Continuing Education Department at Champlain Saint Lambert agreed to provide matching funds, and the research project was born.

It should be noted that Second Life was not created as a vehicle for education, but as a gaming environment. I began looking into the requirements for building in Second Life and quickly realized that it could be an expensive proposition to develop a new area in the virtual environment as well as program Artificial Intelligence (AI) into the simulation. After speaking with a representative at Second Life, I learned that there are auctions for space that have been abandoned by previous occupants, and that it could be obtained at minimal cost. Many institutions of higher learning have come and gone as the initial wave of enthusiasm for the platform has crested, compounded by the lack of student traffic and a viable business model, according to a recent article that explored abandoned campuses.

I would soon learn that the downside of purchasing land through an auction is that you don’t get to choose your neighbours in the environment. With my virtual deed in hand, I began to design an office building, then added furnishings, equipment and decorations. Next I purchased pre-made software scripts to add useful functionality to the space. An example of this is a script that gives you the ability to upload a presentation to Second Life and project it on a screen. This was placed inside an auditorium that I had added to the office.

When designing the counselling scenario for students, we had originally thought of inviting real people into the Second Life office space to be seen by the student ‘professionals’ who would provide counselling. However, due to the legal issues involved, we opted to have students act as both counselling professionals and clients, without revealing the identity of the students to each other within the environment.

The interactions between the student counsellor and the student patient were recorded and a series of evaluation questions followed.

Walkthrough of the environment

Results of the Experimentation

After the experience of running the counselling sessions, it was clear that those students that were already predisposed to using technology and interested in games found Second Life helpful. Some even said that we should set up shop to provide counselling to the general public through Second Life!

Following our experiment, we were able to identify some advantages of using Second Life. There were certainly cost savings related to the decision to build a virtual office space rather than a physical space. Existing ‘bots’ and ‘scripts’ programmed by a community of software developers can be purchased for a nominal fee. I have to admit though, that had we not opted to purchase the land in an auction, the experiment would have been over fairly quickly, as we didn’t have the budget to pay what Second Life requires to set up a new space. 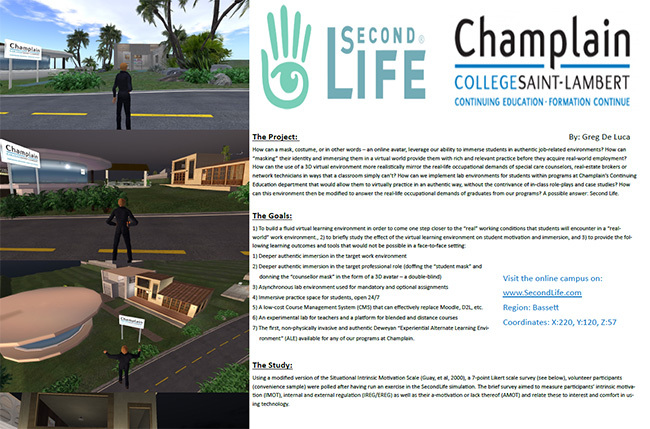 Poster about the findings of the experiment (PDF version)

All things considered, Second Life does not seem to be a cost-effective solution for a college of our size given the amount of time, effort and money that goes into creating the simulation. That said, it can be interesting for certain programs that are already using simulation, if enough of the faculty is using it to justify the cost. Unless you have deep pockets, I would suggest you avoid custom development of scripts and interactions with Artificial Intelligence. One of the quotes I received from a developer for a piece of functionality was upwards of $300,000!

Once the experiment was over, I produced a poster about the findings that was placed outside the Continuing Education Department offices. The experience piqued the interest of a Teacher in the Nursing faculty, who now hopes to adapt the environment I designed for their students. So it looks like the keys to our virtual office will pass from Cont Ed to the Day Division.

With the excitement surrounding the Oculus Rift Virtual Reality headset (Oculus was recently purchased by Facebook), and Second Life’s first forays into support for the Rift, the environment may have a new lease on life. I also think there may be some interesting cross-pollination between Second Life and Massive Open On-line Courses (MOOCs) in the future.

As for me, I am extremely pleased to announce that I have been given the okay to start on a new project where we will be experimenting with Google Cardboard and potentially with Google Jump - a 16 camera array that is used to stitch together virtual panoramas. I’m not sure if there is AI capability with the technology at this point, but it will certainly make the goal of providing a virtual tour of the Port of Montreal easier!

Greg De Luca holds a Master's Degree in Education, Teaching and Learning in Higher Education. He has been working as an Education Advisor in Continuing Education at Champlain Saint Lambert since December of 2014. Prior to this he was working as an instructor in English as a Second Language, also at Champlain Saint Lambert. Greg enjoys staying abreast of the latest educational technologies and enjoys gaming when he is not busy parenting.