Supervising Apprentices Assigned Around the Globe

The Signature ITHQ program (an exclusive series of programs design according to the needs of industry) of the ITHQ (Institut de tourisme et d’hôtellerie du Québec) contains a number of work-study programs where the student must take at least three job assignments of which at least one is for the summer. The student can be obliged to take a first assignment of 14 weeks outside of Quebec and a second assignment of 12 weeks in a foreign country, although these requirements vary according to the program selected. The work assignments’ goals and objectives are linked to the student’s discipline in Signature and could not be accomplished locally.

During the summer of 2009, there were 450 ITHQ students on internship assignments. Nearly half were at ITHQ partner establishments located in one of six Anglophone provinces or in 14 countries. With such a wide distribution, it was financially unrealistic to offer pedagogical support in a traditional manner. A practical and efficient way for the school’s internship service to communicate with students and to meet their needs, that generated student interest and participation, had to be found.

After asking students to choose between Twitter and Facebook as their preferred medium of communication, Facebook was selected. The internship service created a profile called Stages ITHQ which represented the personnel who worked with interns at the school. Seventy-six people became ‘friends’. A Stages ITHQ group was also created where there are currently 166 members including the parents of students and professors. 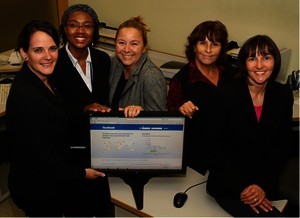 The personnel who worked with interns at the school

Upon arrival at their respective locations, interns could send messages to teachers, parents and colleagues using a blog. The internship service as well as teachers, parents and friends could receive the news using the ‘What do you think?’ tab. This feature permitted us to act quickly on behalf of students, even on a daily basis when necessary. At times we were able to ‘chat’ directly with students who were online.

Breaking the Feeling of Isolation

At the ITHQ, we are aware of the need to manage boredom and depression, given that for the majority of students this is their first time away from home and friends for such an extended period of time and that they are truly scattered across the globe. The internship service created a ‘telephone aid line’ using our Facebook profile to allow students to soldier on giving mutual encouragement to meet the challenges which are a part of their profession and the internship process.

Photo attachments in messages made certain information much more understandable. A picture spoke a thousand words when the internship service could receive a photo of student accommodation attached to a complaint about that issue. A judgment as to whether the student’s discomfort was justified or merely a case of culture shock was easier to make and in the second case, the service was able to give appropriate support to help the student make the transition from North American values to those of their host location. After an adjustment period of about two weeks to their environment, student communication took the form of e-mail to parents, friends or the ITHQ.

As Facebook is a social medium, we were able to send birthday greetings to ‘friends’ as we knew their birthdays. The internship service also built a photo album with pictures from events that happened over the summer which was shown during the graduation ceremony. Back from their assignments, students expressed great appreciation over the constant support and on-going social contact that allowed them to stay in touch with their friends, their parents and their school from around the planet. Facebook delivered an amazing enriching pedagogical experience for both students and the ITHQ.