Comment 0
Partager
This real life story is a translation of a text published in Profweb’s French edition.

What’s better than an authentic and concrete project to engage students? There is no shortage of opportunities in Electrotechnology, but one of the projects I was developing with my students has taken a completely different tangent within the context of the COVID-19 pandemic.

I created the Dista project in collaboration with my colleague Christian Thériault (a math teacher and associate professor at the UQAM), a multi-disciplinary team of professionals and involved the students. Dista is a system that measures the distance between people by utilizing optics and artificial intelligence.Two cameras mounted inside an advertising truck film people in the streets. An artificial intelligence program processes the images to identify where people are situated and measures the distance between them through stereoscopy. A giant screen mounted on the outside of the truck shows the pedestrians their picture and superimposes a measurement with arrows indicating the metric distance between the people. And those people who believed that they were 2 metres away from the others discover that this isn’t necessarily the case… 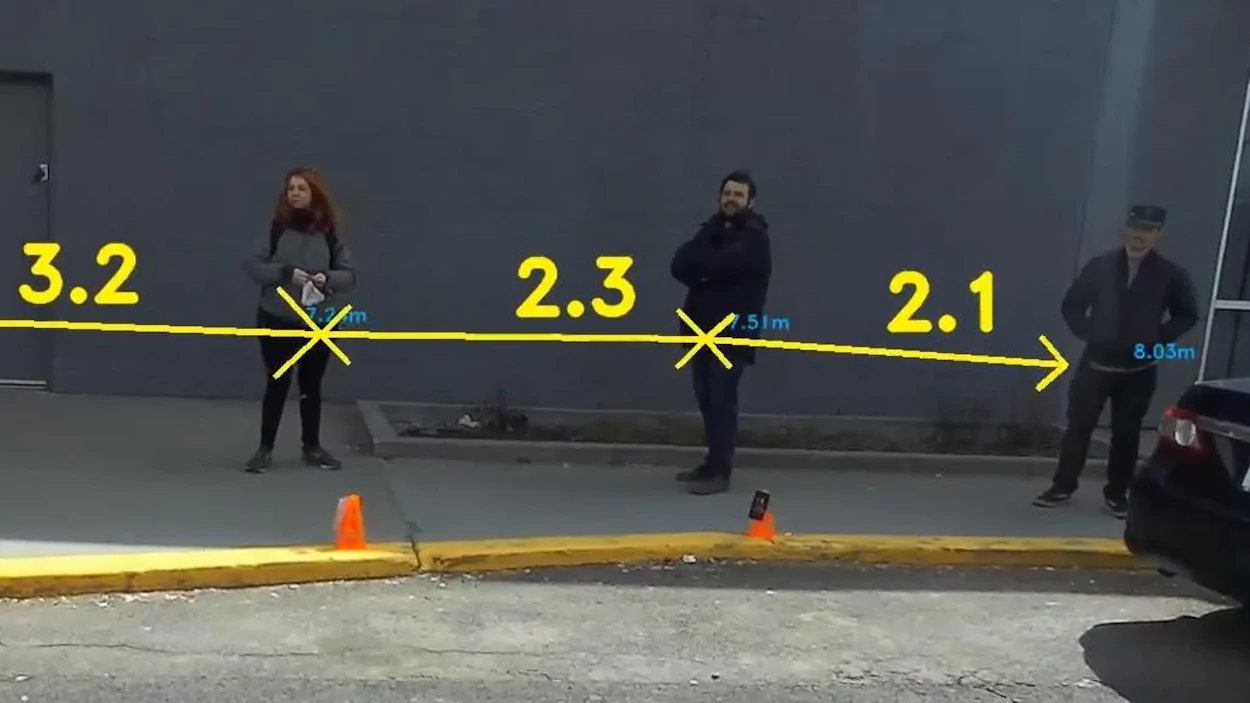 This image represents what people would see on the advertising truck’s big screen when it passes next to them.

Genesis of the project

In Electrotechnology, I teach the development of prototypes for instrument measurement within the context of the comprehensive assessment for the program. Students must design and develop an instrument to measure a physical phenomenon that is not commonly measured. As an example, in the past, some students developed an instrument to measure the pressure applied by the hand on a doorknob.

For 2 or 3 years, I have been searching for a way to involve my students in a larger-scale project. I also wanted to find a way to involve my colleagues and businesses. I was seeking to present more entrepreneurial content and highlight some project management theory as well.

Early in 2018, I spoke about my interests to some colleagues and a researcher from Optech [in French], the collegial centre for the transfer of technologies at our college. We had the idea of developing a project around a provision of the Highway Safety Code that requires drivers to maintain a distance of 1.5 m between their vehicle and cyclists within areas where the speed limit exceeds 50 km/h, or 1m in zones where the speed limit is lower. The project was designed to use artificial intelligence so that a computer could recognize vehicles and cyclists using cameras, and then measure the distance between them. A sign next to the road in busy areas close to biking paths would have informed drivers of the distance between their vehicles and the cyclists. These distances are difficult for most motorists to quantify, after all…

We also created some ties with the École de Technologie Supérieur and are associated with Marco Pedersoli, a professor who specializes in artificial intelligence. This provided us with an opportunity to work with some Masters students in systems engineering. By the end of the project, it was planned that some Bachelors students would also be involved.

The first few months of the project

In December 2019, the team and I started working on the project. Among the 8 students in the prototyping course, a team of 2 volunteered to handle some of the initial steps of the project.

And then the coronavirus arrived…

In March 2020, the college closed and everything was put on hold. I was looking for ways to continue to be useful. I volunteered for an organization that works with the homeless, and I got on my bike and went shopping to help my father and other friends who were self-isolating after travelling. One day while riding my bike I had a sudden flash of inspiration: the technology we were working on to measure the distance between vehicles could be adapted to measure the distance between people to respond to a current and pressing need.

I didn’t have any trouble convincing the team (and other enthusiastic volunteers!) to dive right in with me with both feet on this project.

I delegated a few assignments to the initial student team that was working on the Dista project: find some materials, look some things up... But all the students in the group were invited to the different team meetings with engineers, programmers, etc., with some meetings even taking place at night. Without the possibility to be in class, they were still able to participate in a sort of shadowing opportunity within a real team that was managing an urgent project. Some of them followed me during a live stream I broadcast while I was hooking up the equipment in the truck.

The prototype is currently functional. The truck is making its rounds in Montreal. It was the subject of an article on Radio-Canada [in French] and a segment on the popular tv show Infoman. We are currently awaiting a response from certain public authorities to deploy the technology.

A report featured on the Infoman tv show [in French]

The next steps are: 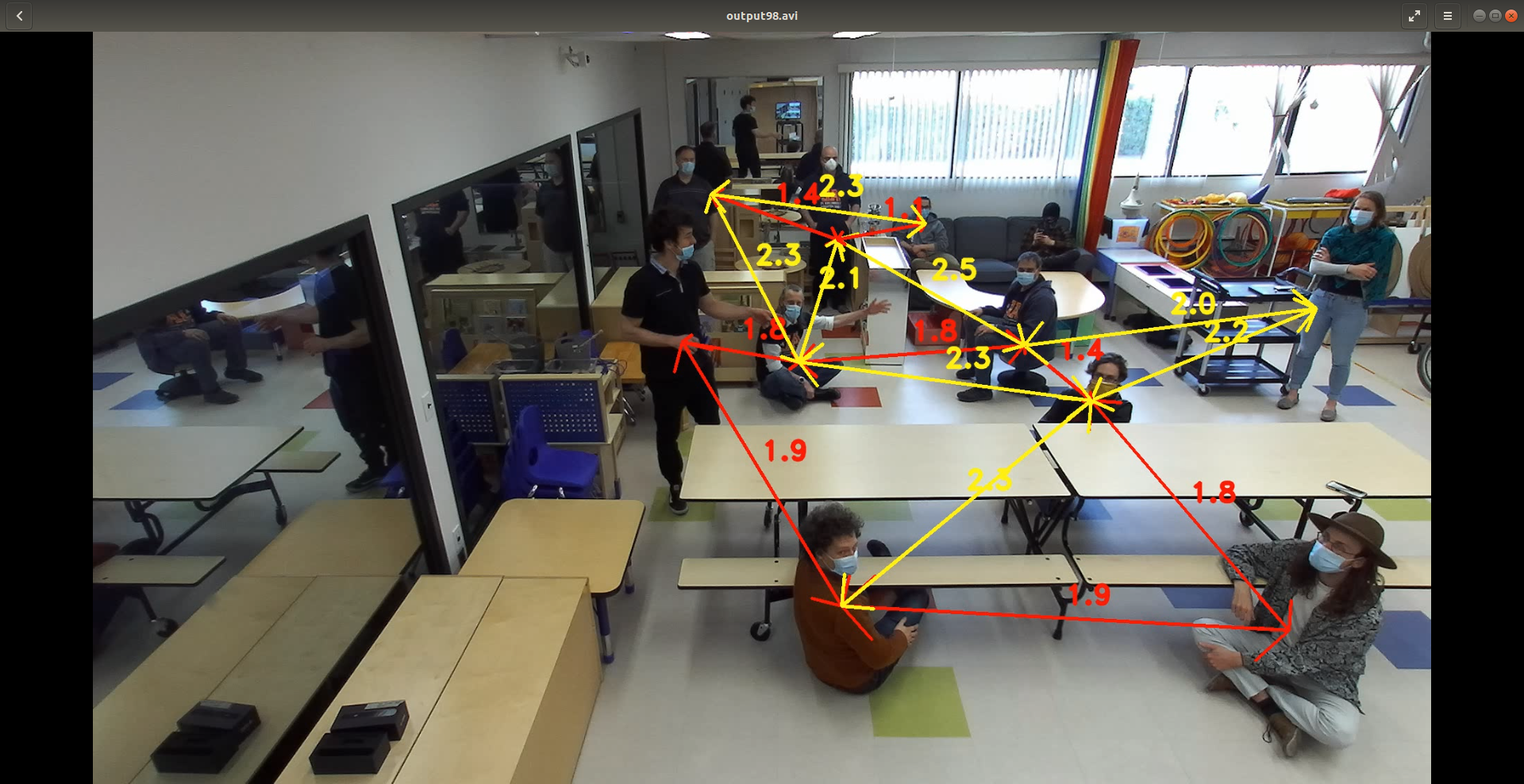 Simulating the use of the application in a daycare

The project is far from over! And I will keep involving my students in the program next year, whether it be to develop the tool or to spread the word about artificial intelligence in schools. They will surely benefit all-around from their involvement!

David Beaulieu He is an Electrotechnology teacher at Cégep André-Laurendeau in Montreal. Physical Engineer by training, he holds a Masters in Engineering Project Management (from the Polytechnique in Montreal). His career path has been marked by more than 10 years of varied experiences in project management followed by close to 10 years of teaching. He is now teaching the development of prototypes for instrument measurement. Involving his students has always been at the heart of his teaching. For a few years now, he has been launching research projects that highlight the expertise of his students.