Screensharing with LiteShow III to Create an Active Learning Scenario

In the Fall of 2011, APOP launched an ongoing Call for Proposals for ICT Projects which aimed to support local initiatives in Anglophone cegeps. I submitted a proposal to test the feasibility of using active learning technology in the classroom to support active learning (AL) strategies and activities. I not only received some financial support, but got the services of APOP’s Évelyne Granger as well. She suggested that I use LiteShow III in response to an analysis of my needs, and as a result, the technology was used at Vanier College in General Biology I (101-NYA) during the fall semester of 2012. A secondary objective of this project was to judge whether the screen sharing capability of this technology could be used in classrooms with a wireless signal to offer low cost means of converting traditional classrooms into AL ones, thus offering low cost active learning options throughout the college.

LiteShow III was used in General Biology I labs in the Fall of 2012. The following features were examined:

LiteShow III hardware and software proved to be very easy to install and use as a screen-sharing tool. The software was successfully installed on all laptops in the Biology labs, and many students opted to install it on their own computers. No technical difficulties were encountered during the use of the technology by either teacher or students. In fact, all students found it very intuitive to use and appreciated the added value it brought to the experience of learning.

The technology was also demonstrated to colleagues in the Biology department at Vanier College. Many were so impressed by the potential of LiteShow III that the department obtained funds from the college to purchase the technology for wide use in all Biology labs. A total of 4 LiteShow III units were purchased, 3 to be used in all 3 labs of the Biology department, and an extra unit to be borrowed for use in classrooms. The units are relatively inexpensive costing under three hundred dollars each. APOP has produced a guide to help teachers use the software.

In my own Biology lab, LiteShow III was used in the following manner : 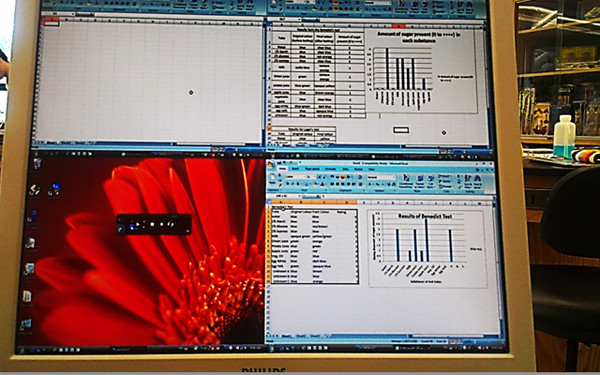 A LiteShow III enabled display in the Biology Lab

This initial success of using LiteShow III in my lab encouraged me to continue to use LiteShow III in the winter semester of 2013 and to recommend its use throughout the college as a low-cost technology tool to enhance active learning strategies in classrooms. Because the classroom section of my course was in Vanier’s new active learning classroom, there was no need to use this technology in this part of my classes, but I can see great potential for its use in a standard classroom.

Another option that we are currently exploring at Vanier College with LiteShow III is the use of the technology in tandem with graphic pads as a low-cost replacement for the Interactive Electronic Whiteboard. In an active learning context, this arrangement would allow students to write their answers on the graphic pad using a stylus and share them with their class. Kevin Lenton of the Physics Department at Vanier recently received a SALTISE mini-grant and has purchased fifteen graphic pads which will be used for such a scenario.

The only limitation that I encountered was the lack of any iPad or Android apps that could connect tablets to LiteShow III. This problem seems to have been resolved, however, just as more students are using tablets in the classrooms. The manufacturer has added apps to allow LiteShow III to connect to an increased range of devices as well as computers using Windows 8.

The advantages of using LiteShow III in classrooms include :

As with so many other applications of active learning I have noticed an increase in students’ discussion of the material resulting in a more collaborative and student-centered atmosphere in my classroom.

Do you have any questions or comments about mobile applications promoting active learning?