Many people are aware of the link between mathematics and music. I feel that I am part of a long tradition of mathematical musicians, being a product of the intensive music program at Pierre Laporte High School in the Town of Mount Royal. We learned everything about music. There were fourteen classes instead of the standard eight in our curriculum, and six of those classes were music related. We had choir practice, music history, vocal theory, music literature etc. I finished the program well-versed in music and also learned how to write music. So, the account that follows is really a logical result of my background and my own education.

Mathematics at Centennial College and everywhere else in the college network is not only a subject for students in the Pure and Applied Sciences. Many math teachers work to adapt the content of their Calculus 1 classes to accommodate Social Science students in the Business option who are not always math inclined. Last semester was the third time that I'd been teaching this class, and the first two times that I taught about graphing polynomials, I realized that the material was not being well understood.

A Sort of Eureka Moment

In a sort of Eureka moment, I decided to bring together a number of elements from my own background to make a video tutorial on graphing polynomials. This is the last of the four modules that we cover in Calculus 1, and the problem has a wide scope, meaning that there are a lot of steps involved covering several topics at once. Generally, I have discovered that this module is the one that gives students the most trouble, so I figured that a video tutorial that students could use, pause, and work through a problem as they needed could be helpful.

The video was created with software on my own computer, although one of the processes was done with a trial version of the software Adobe Premiere Pro which I'm hoping to be able to buy as part of a project that I'm proposing. It's video-editing software, and I can't make another one until I get the license. I did most of the visuals with Microsoft Paint for the pictures and a combination of Word with MathType, which lets me write the equations which I can then copy paste as pictures, and then sequence.

The Video Goes to the Class

My plan was to create a musical mnemonic video to guide students. If you listen to it enough, particularly the chorus, the steps that you need to graph polynomials are part of the lyrics. As well, the chorus is pretty catchy, and if you can remember the words of the chorus, then during the exam, replaying the chorus in your head will give you the steps that you need to solve this kind of problem. Additionally, the verses were designed to give students the solution to a specific problem that they could solve along with the song.

Once the video was ready, I uploaded the file to YouTube and gave the link out to students. We have an Omnivox system which all students have access to in terms of e-mail and communication with teachers. Last semester, which was the first time that I had the video online, I sent a link out a week prior to the exams that were being given on that topic to all the students. 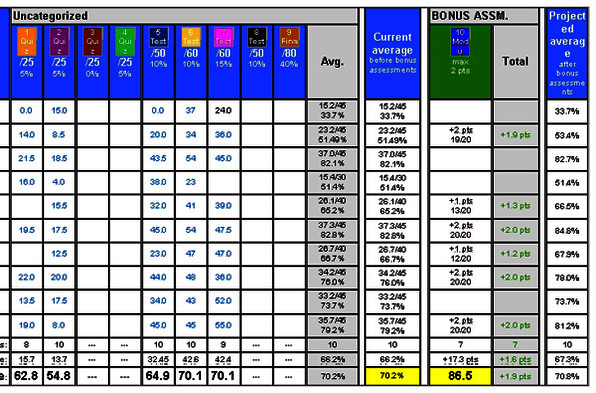 On the results chart, the bonus assignment was on graphing alone, and although there isn't another grade based solely on graphing to compare to, it's still a staggering jump when compared to the class average! Both of these values are in yellow.

When I used the video, I received gratifying results. I was able to demonstrate significantly better performance for the graphing polynomial module using the video to our dean. The potential of videos for other modules was obvious.

Every wide-scope module in Calculus I could use a video tutorial to help students master that information. I'm currently applying for funding to make this series of videos from the CCDMD. I'm not quite certain of the specific titles, but I want to make a series of them be it in rap or another kind of music. I want to incorporate music into videos to allow students to better remember the steps necessary to resolve each kind of problem.

The CCDMD funds projects that are useful for not just one class, but for projects that are cegep-wide. They want to see whether or not this project is of interest to other teachers in the network. In the application, there are forms which ask other teachers to support the idea that I am proposing in order to determine if the material has potential to be used more widely within the network. The deadline for final submission is March 4, and I would very much appreciate people, particularly other math teachers, contacting me through the Comments feature below or by e-mail to indicate their support for such a project.

Let us praise Calculus in song!