Polycom for Polyglots in Saint Petersburg

A new semester is beginning with a new partner on an ongoing exchange project between French as a Second Language students at Vanier College and students of French in Saint Petersburg, Russia which began last year. It got started, almost by chance, when the Dean of Science and General Studies at Vanier, Eric Lozowy was in Russia two summers ago. He met with a Chair of the Department of Romantic Languages at Saint Petersburg University, Professor Mikhail Marusenko, who is fascinated with Quebec culture and language. The students in the department have a number of courses in French dealing with the language’s linguistic regions, such as France itself and regional variations worldwide.

Within this program, there is a course on Quebec French. In the course, Mikhail, as a linguistic specialist, explains the phenomena that exist in Quebec French. He has published linguistic studies of language in Quebec in Russian. Students also read Quebec literature, in French and in Russian. Mikhail, however, felt that the course could not convey the reality of Quebec through lectures and literature alone.

Virtual Exchange with a University Class in Russia

When Eric then suggested that a professor could be found in Canada to arrange a partnership, Mikhail was enthusiastic. Eric sent an email from Russia asking me if I would be interested in such a project for my own course in French literature. It would have been a difficult offer to refuse. What happened with Mikhail was a first-time experience for me, and I thought it would be complex to establish an exchange.

In the beginning, I sent him a description of a potential seminar by email. My original plan was to have seven or eight meetings, the first one on a general topic, a sort of ‘Everything you wanted to know about Quebec linguistics, morphology, syntax etc.’ in order to make sure the Russians understood the basics. After that, in later classes, we’d go to examples from literature where joual began to appear in the Fifties and the Sixties and then track what’s happened to the accent of the French spoken in Quebec as we moved into the Sixties, the Seventies, the Eighties, the Nineties and today. These differences reflect a linguistic change that is generated by sociological change such as more students in higher education and changing values in media outlets.

A lot of the decisions were - as you say in English – no brainers! When we started communicating by email, I said to Mikhail, “Good, as there is an eight-hour time difference between Saint Petersburg and Montreal, we really don’t have much choice. My course will start at 8AM and your course will begin at 4PM. We’ll end after two hours because you’ll be at 6PM and your school day will be more or less finished. At the start, I did everything without any real input from Mikhail. It was a problem, but it was also an advantage. Because I organized everything, I knew everything that was going on, and I had very little insecurity during the first iteration of the course.

Amazingly, another ‘no brainer’ was the technology! When Eric was in Russia, he knew Vanier’s boardroom had a hardware installation using Polycom software. Furthermore, he discovered that Mikhail also had it available for his classes. Instead of worrying about connections with teleconferencing platforms and connections with a webcam, I literally walked into the boardroom where there’s a camera hard-wired, pushed a button and had perfect communication with Mikhail’s class. The technology was never a problem from the first day of classes.

At Vanier, we now have a second option. There’s a mobile kit for Polycom as well. It has a television which is similar to the one in the boardroom but not fixed to the wall. The cegep decided to order the cart from Polycom to promote exchanges with speakers from around the world or as close as Cégep Saint-Laurent which is a francophone cegep immediately adjoining Vanier College. 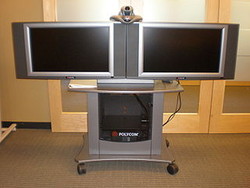 The ease of the technology also facilitated communication between Mikhail and myself. After certain classes, once the students were gone, I’d speak a bit with Mikhail. I’d ask him if he was okay in maintaining the status quo or if he wanted to change anything. I also fine-tuned the class schedule. One thing neither of us had taken into account were the holidays that were not common to the two schools. Vanier does not close for Red Army Day or the International Day for Women! Also, Saint-Petersburg did not strike in sympathy with our college’s one-day student walkout last March 22.

This year I have checked the calendars between the two schools, and there should be no surprises. There is also a new teacher in Saint Petersburg giving the course this year, Maria Miretina. Mikhail and his students were extremely satisfied with our course last year, and I am looking forward to increasing the contributions from Maria this year, perhaps delivering short information capsules rather than having me give the course in its totality.

I also feel that students from the two groups working together on projects is a possibility. I am excited by last year’s successes and looking forward to building upon them to truly create an exchange of views about Quebec culture between my advanced English speaking students within it and the Russian speaking students who are observing Quebec from afar.

Do you have any virtual exchanges in your classes?