Alice McLeod met with Norm Spatz of the Profweb Animaweb Team to talk about her use of WeBWorK. This following account of that meeting provides information on the use of this exciting resource for Mathematics.

WeBWorK is a system for online math assignments. Teachers can build problem sets by selecting pre-existing problems from a library, or - if they're sufficiently ambitious and have a bit of programming background - they can create their own problems from scratch. Students can then access the assignment from any computer with an internet connection. WeBWorK shares a common ancestry with LON-CAPA, but is more specialized. Link here to view the slides from a mini-course on WeBWorK offered by the University of Rochester.

WeBWorK is built for math, so it understands a variety of mathematical functions, for instance trigonometric functions and square roots. The notation students use to input math expressions is similar to what is used in the Texas Instrument calculators, so they don't find it too hard. A WeBWorK problem could be anything from adding fractions to evaluating an indefinite integral. WeBWorK can interpret algebraic results, so most types of problems you would see in a standard Calculus text can be written in WeBWorK format.

WeBWorK is great for formative assessments because the computer will immediately tell a student whether an answer is right or wrong. The student can then try again while the question is fresh in their mind, and keep working until they get it right. In contrast, a traditional paper-based assignment generally won't be marked and returned to the student until a week or so after it's completed, and then the student has relatively little motivation to correct their errors. Of course, with WeBWorK the teacher has a lot of control; they can limit the number of attempts on any given question, or suppress the information about whether an answer is right or wrong. Once the WeBWorK assignment's due date has passed, students can still access the assignment, and see the correct answers. They can also still modify their own answers at that point, but their grades won't change. 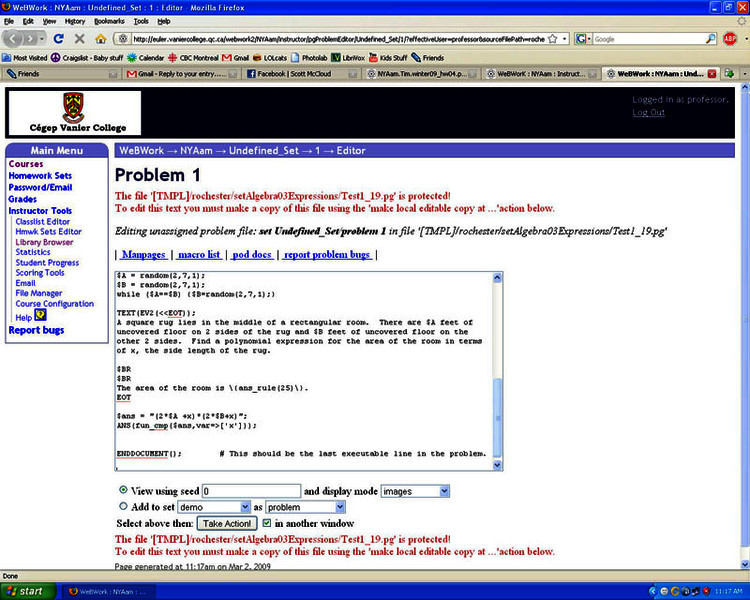 Another great feature of WeBWorK is that assignments are different from student to student. Numerical values are randomized, so students can work together to understand how to solve the problems but can't directly copy their answers from each other. Alice encourages her students to talk to each other about the assignments, and also to contact her whenever they get stuck. WeBWorK has a handy "email your instructor" button on every question. Compared to when she was giving traditional, paper-based assignments, Alice finds that with WeBWorK she spends more time answering students' questions, and a lot less time marking -- which seems to her like a very good trade-off! 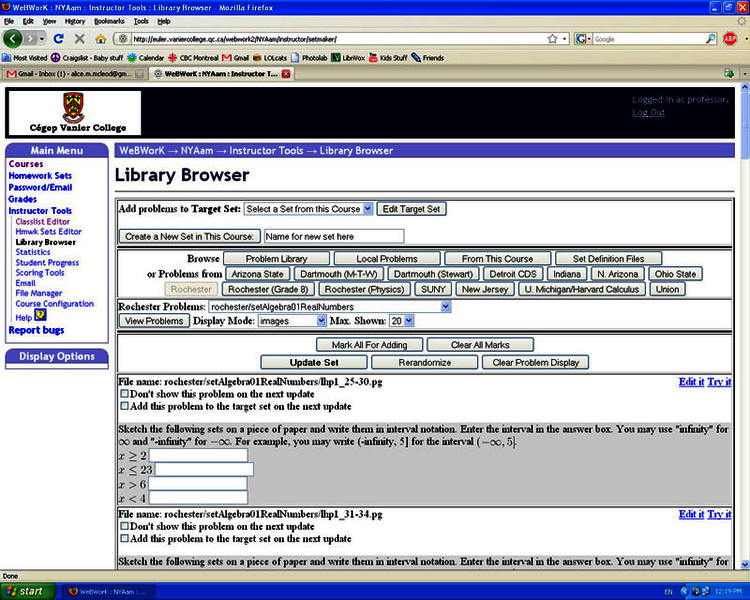 Catching the IT Virus

Alice McLeod found out about WeBWorK from Bill Boshuk, another math teacher at John Abbott College. His help was invaluable when she was getting started, because while WeBWorK is user-friendly for students, it has a pretty steep learning curve for teachers. Once Bill had got her started, Alice found that it wasn't hard at all to make up subsequent assignments by selecting problems from the available problem libraries. She hasn't yet tackled the challenge of writing her own problems from scratch, but she would like to try that in the near future!

Originally from Halifax, Alice McLeod inherited her love of math from her father, who got down on the kitchen floor and drew a Sieve of Eratosthenes with her when she was six years old. She went to McGill for grad school, and fell in love with Montreal. Alice previously taught at Lower Canada College and has been teaching mathematics at John Abbott College since late 2005.

Use our Reader Response Feature to share your adventures in the IT revolution with your colleagues.