Not Letting the Technology Get in the Way of the Teaching

Although 3d animation has almost become synonymous with technology, fundamentally the heart of the art is not the technological wizardry but the far more ancient craft of story telling. The challenge for the teacher of 3d animation is not so much how to integrate technology into the teaching but how to teach principles which extend beyond IT. Animators are storytellers and actors who find their creative essence within themselves and only then use technology to express their vision. At heart, 3d animation’s roots are ancient, and animators have been plying their craft long before the computer, as storytellers, comic book artists and even mystics!

Before the story emerges, students must make an investment to learn a technology and a process.

How Technology Can Trump Art

A student with a story to tell no longer starts with a flash of inspiration. Before the story emerges, students must make an investment to learn a technology and a process. In a program like 3d Studio, which is used in our curriculum, there are thousands of commands to learn and any two put together create another variable. As the student learns the software, we are teaching them to be aware of every aspect of the pipeline, which is shop talk for the whole process from concept to finished product. 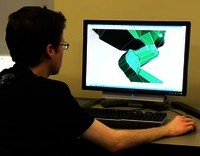 The term pipeline is deceptively simple. Generally it starts with concept design. Models will be built by modellers, texture artists create the surfaces, riggers will create the skeleton system which needs to be manipulated in real time. CGI artists or matte painters will create fantasy backgrounds, and then once the character is fully rigged, the animator takes over. For the student, the flood of technology can stifle creativity.

Project made by students

What the Animator Does

The animator brings life to the character, he’s the entertainer. The challenge of designing a program like 3d Animation is to ensure that the technology doesn’t get in the way of the animator learning the art of animation. In writing the program at Dawson, which is only in its second year, the department included acting classes. The head of the Department of Drama welcomed animators as he felt that they wanted to learn acting for its craft as opposed to the glory of the stage. 3d animators will start this class in the fifth semester. The course was offered by reducing the time devoted to rigging because it was felt that an animator is not a person who rigs. A rigger is a person who understands biomechanics; it’s programming not telling a story!

Once students understand the principles of animation, they get introduced to the machinery. They start on computers using 2d software. 2D software emulates the hand drawing on paper. Students have fewer distractions. Within the 3d environment, what you can do is overwhelming. With 3D animation, the animator is approaching a real human character. If you can’t tell whether a character is human, the animator has succeeded in getting you to suspend your disbelief. Animators must strive to replicate the unpredictability in our persona that isn’t represented in a script! 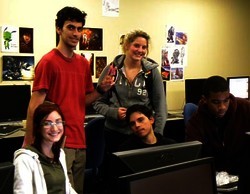 Some Students in the Program

Students in a three dimensional environment can become so overwhelmed that they lose sight of the whole point of their goal which is to become a story teller. For most of the kids coming out of high school, they’re so saturated with media that they juxtapose their own worth with what technology they have access to. It leads to an unreal expectation of what success is. You’ve got to lead them away from that to the core of their craft which literally started in caves.

Students use computers from the start. This doesn’t change the value of the work, just the method. The majority of classes in the discipline are given in a lab with the exceptions of physical sculpture and fine arts. Drawing from observation is a fundamental skill to develop communication with a pencil and a paper.

As this story goes online, Dawson’s first cohort is starting their third semester.

Teachers are coming out of industry and dealing with a classroom environment. IT has a place in computer labs, and projection consoles showing the teacher’s screen are up on the wall so that students can follow their techniques. Teachers are learning the value, however, of using LANSchool to override student computers and focus attention on fundamentals. Teachers use these moments to critique student work. Students are also actively encouraged to provide peer advice to their colleagues.

As this story goes online, Dawson’s first cohort is starting their third semester. The program was done in consultation with the industry; there’s an advisory committee. The administration got advice from professional schools and a consistent pedagogical plan was developed to create an animator and give the industry what it needs in the end. The challenge for the designers of the 3d animation professional DEC program is to turn out professional animators and not just technicians.