My Journey in Blogland

Class sizes appear to get bigger with each session and the obstacles to stimulating class discussions, the goal of many English teachers, seem increasingly daunting. Discussions that do occur are often carried on the shoulders of a few students, those interested, motivated, and at ease with public speaking. Organizing small group discussions is often a solution; however, students who are natural public speakers can take over. Although a report of each group's discussion at the end of class can give a sense of closure, it does not ensure that all have participated nor had a chance to formulate their ideas. Yet, class essays and writing assignments suggest that despite their silence, quiet students often have opinions and ideas that would advance class discussion if they had a chance to express them. So, how to create a space for discussion that is open to all students? 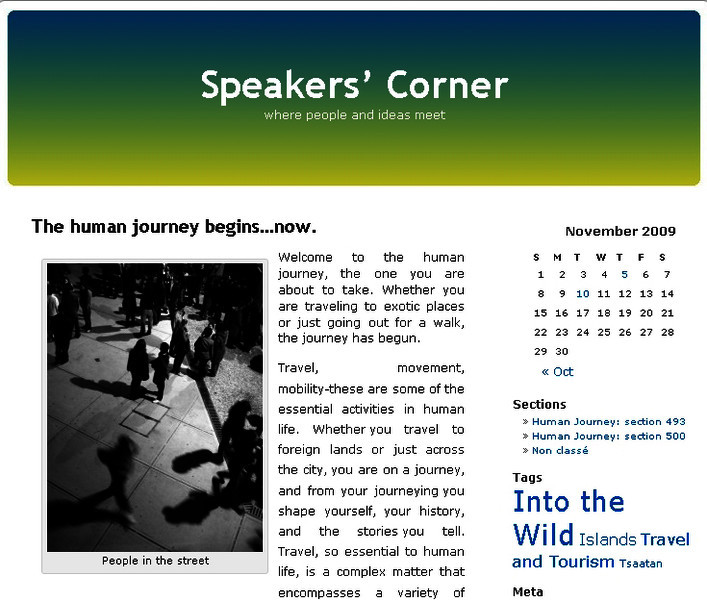 Ready to try anything, I opted for a blog. This may not seem radical but I am a low-tech type who, up until now, used transparencies and the overhead projector. On the other hand, I was intrigued by the blog's potential and often in awe of my students' facility with electronic technology. Recently, I witnessed a group of students organize a poetry slam at the neighboring University's student pub that was attended by members of their Facebook groups. From conception to realization, it took a week to organize, confirming my idea that although these new technologies can be distracting and over-rated, often touted as a quick fix for many problems in education, they do create new possibilities for communication.

My objectives for using a blog in my new class were to help students find out what they think and to provide them with a chance to exchange ideas with others. I also hoped that it would prepare students for in-class discussions and eventually for out-of-class writing assignments. For those who say they have no ideas, it could help them discover what they and others think. For those with clearly formed ideas, they could take them one step further by publishing online for others to read. I also had my self-interests in view; by listening to their rough ideas, often lost in the formality of writing assignments, I anticipated having a more accurate assessment of my students' understanding.

Armed only with a vague idea of what blogs can and cannot do, I went to Judith Beaudoin, Champlain's Education Advisor, to demystify blogs for me . My classes had already begun and my transition into the electronic realm was made over several weeks with sporadic one-on-one sessions. Familiarizing myself with Wordpress's organization of information using categories and tags, I got online as quickly as possible and gained experience as I experimented with the media. With Judith's help, I was almost ready to go after three weeks, and my sketchy understanding of how to administrate the blog led to a slightly shaky initiation.

Fortunately, my computer-savvy students registered, posted and then helped other students. Once The Speakers' Corner was operational, however, my initial relief soon gave way to a darkening premonition of oncoming doom. As I contemplated monitoring 70 individual postings, each 250 or more words plus comments, I changed the status of students on the blog, limiting student interactivity to comments on my posts in the name of self-survival until I could plan a more practical way to handle posts and comments.

An informal survey of students, conducted after midterm exams and essays, indicated the blog is a positive addition to the course. Several students told me that writing an informal response to a specific question and reading the comments of others helped them write their essay. A few even admitted to enjoying the activity. On the average, those that responded said that they read at least three other comments for each post. I found that comments were thoughtful and most went over the proscribed length.

Although my blog was up several weeks after classes had started, it was quickly integrated into class work. Students were quick to comment and their comments often oriented my next class. So far, I have used the posts to introduce concepts and ideas before class presentations and to continue the discussion of a reading after the class has ended. Reference to students' comments has served to begin class discussion and highlight key ideas. With the end of my session close at hand, my next goal will be to increase interactive exchanges by having students publish their own posts. Students will be able to write for and receive comments from other students. In the future, I see students using the blog as an open space for more creative class projects and as an alternative or complement to class presentations.

The verdict? My effort paid off; The Speaker's Corner promises to carry class discussions beyond the classroom.