Inter-linguistic, Inter-provincial and Even International Possibilities

A Virtual Team-teaching Project has been taking place between Cégep de Sept-Iles and Vanier College since 2005. The project's pioneers, Sharon Coyle and Sophie Jacmin, are both Humanities teachers and coordinators. Their students would meet from their respective colleges online using webcams and projectors. This avant-garde approach, courage to use IT, and dedication were inspirations to me in my adventures in online team-teaching.

In June, 2007, I attended the AQPC Symposium where I stumbled upon Sophie's and Sharon's team-teaching presentation and round table. Interacting with students from a different region of the province intrigued me as well as the inter-linguistic (between Francophone and Anglophone cégeps), inter-provincial and even international possibilities! I expressed my hope to one day be part of a similar project with Sophie, and in January 2009, I had my first team-teaching experience with Sharon Coyle. This semester, I have happily become the coordinator of this venture.

In Winter 2009, my Humanities course Gender and Worldviews joined forces with Sharon's. Her group of fifteen students and my group of thirty-two students met about seven times. Below are my views on some of the IT tools that we used: 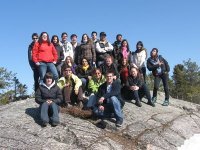 Although our IT discussions were interesting, it was sometimes hard to get through an activity. Below are some barriers to effective online discussions that we noticed:

In order to resolve some of these issues, this semester, some former students will be peer-tutoring and helping out with IT. Such a project requires inter-departmental and inter-collegial commitment. In the long run government funding for such projects must take enhanced IT staff in the colleges into account.

This activity is still a pilot project, and although Sophie and Sharon are great mentors, I am far from mastering this technology and new way of teaching. We are still developing a modus operandi and we need more people to get involved. Having seen the value of this kind of teaching in an Anglophone to Anglophone environment, I see the potential for other projects in the future which could involve Anglophones and Francophones in virtual meetings.

At AQPC this year, I spoke to some faculty from the Francophone network who expressed interest in exploring activities such as virtual meetings to bring together the Anglophone and Francophone youth from this province.

Please share your views using the Reader Response Feature below.