Laura King was part of a team that participated in a study funded by PAREA (Programme d'aide à la recherche sur l'enseignement et l'apprentissage) about reading disorders at the collegial level.

Laura, how did you become involved in the research?

I had gotten release time as part of the in-house research projects that were being done in the cegeps with funds for aide à la réussite. I felt that we really needed to do some sensitization in the area of student learning disabilities. My colleague to be, Zohra Mimouni from Collège Montmorency found me at that time. We eventually got a PAREA grant and of course, it felt very good. It seemed like the time was right to look at reading disorders.

In order to help students succeed, we first had to find out which students in the francophone, collegial population were at risk for having a possible reading disorder. The first step in accomplishing this goal was to design a screening tool, a questionnaire. To recruit students, ads were placed in three francophone cégeps, contacts were made with various teachers and professionals and letters were sent to those students who had not passed the épreuve uniforme de français. We surveyed students individually and in various courses such as mise à niveau French. The questionnaire data were then compiled to offer information on socio-demographics, schooling, support services, language acquisition, reading, writing, mathematics and spatial-temporal organization.

As you can imagine, technology greatly facilitated my research. Applications like Word, Excel and SPSS were invaluable for tasks like statistical analysis and word processing. 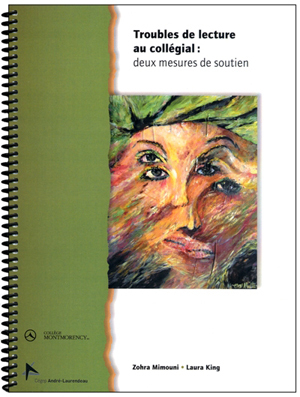 What did you discover?

Results identified in the initial questionnaire showed three sub-populations. There was a large population who did not appear to be at risk for a reading disorder (190 out of 502 participants). The French term for them is normolecteurs. There was a second population of 38 students with a diagnosis of dyslexia. A third population that scored similarly to dyslexic students in one aspect or another was identified. It was considerable, numbering 274 of the 502 students. Although they were performing similarly to students diagnosed as dyslexics, they had no diagnosis for the condition.

After we identified these three populations, 119 of them, of which 28 were diagnosed dyslexics, agreed to individual, two-hour testing. We used standardized language-assessment tests so as to be as reliable as possible within an adult, francophone population. At this point, we were able to say that based on these standardized-test results, the third population, the at-risk group of 53 participants was looking more and more like students with a diagnosis of dyslexia.

During a third stage, we tested the effectiveness of two accommodations typically offered to students with learning disabilities. Was time and a half for taking a test a useful accommodation for certain students? Did time and a half with audio support help other types of students? These two accommodations are offered to students with a recognized learning-disability for theépreuve uniforme de français. These accommodations were of no benefit for the controls (n=45), but for the diagnosed-dyslexic population (n=28), the time-and-a-half measure brought them up to performance levels that were not significantly different from those of the controls. As for the audio-support accommodation, this proved to be helpful for students with a certain type of dyslexia.

How has the study affected your teaching?

I have always admired students with learning difficulties who study at the post-secondary level. Spending so much time with these students has completely sold me on their ability to succeed. Once the diagnosis and accommodations are there, these students have rates of success similar to students without learning disabilities. These students' love of learning is, if anything, often very powerful. Every day, they put themselves out there to learn. I'm also sold on accommodation. This research has influenced how I use technology.

In class, I'm also better able to detect students who are at risk for having reading and writing disorders. Excel and audio files now play a larger role in my teaching. Here are some examples of activities that I have done with my students now that there is a laboratory which has been equipped to facilitate these types of tasks:

I am also thinking of perhaps creating some digital dictations and grammar tasks.

In terms of evaluation, I have become more rigorous in my test design. I now focus more on making sure that test items are reliable. Before our research project, if there was a question that everyone got wrong, I didn't worry as much as I do now. Now, I understand that that it is probably an unreliable measure of whatever it is I am trying to test. Having mastered Excel, my analysis of results is more detailed and I give students more information such as the median and standard deviation which I didn't give before.

In closing, this research demonstrates that the system must pay to provide necessary resources to students with learning disabilities. There's an undetected population in francophone cegeps that needs screening and accommodation so that they can complete their cegep degrees. These costs are considerable, but much cheaper than the price tag of failure. IT of course has a key role to play in making this help available.

Our research report is available for consultation in paper and electronic versions at the Centre de documentation collégiale (CDC). This project would not have been possible without the support of PAREA, Collège Montmorency, Cégep André-Laurendeau, Collège Lionel-Groulx, Cégep de Vieux Montréal, Ms. Chantal Courtemanche, the head researcher Ms.Zohra Mimouni and most importantly, the many students who participated in our project.

Laura King She works as a teacher-researcher at Cégep André-Laurendeau where she has taught English as a second language for over 20 years. She offers workshops on student success, screening and accommodation, and ICTs for students with reading problems, learning disabilities and other disabilities. She is currently managing a project on using students’ smartphones in postsecondary teaching that is financially supported by the Entente Canada-Québec.