I teach Humanities and Philosophy, and these courses contain really abstract materials that some students have a hard time grappling with. Moreover, students, particularly those coming from high school, aren't used to following arguments and counter-arguments, going back and forth between different views. They're used to a direct approach, and sometimes, they get confused. I also delve into the sciences although some students are not in science. Students are unfortunately often shy about saying when they haven't understood something in class. Using clickers to ask if they've understood, I get results. Sometimes, half of them have not understood, and as a result, I explain the concept in a different way and ask again. Usually by the second time, there are only one or two people who don't get it, and I ask those people to see me after class or during my office hours so that I can explain the material to them individually. 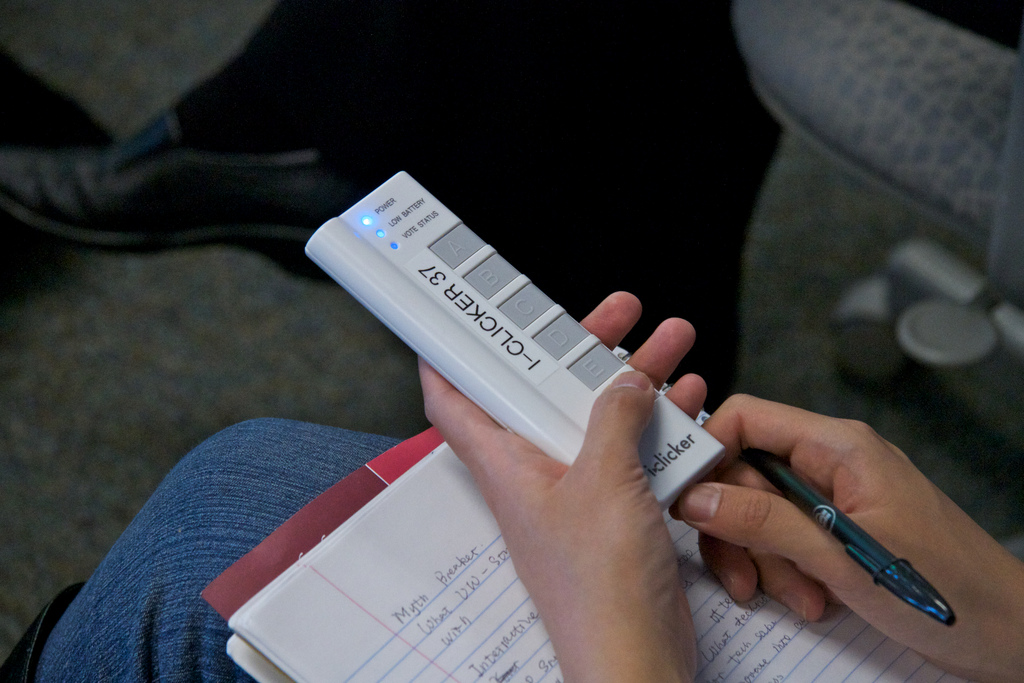 A participant using a clicker to respond to a speakers question (photo : Alan Wolf)

I use clickers in my "Thinking About Sexuality" class and my "Environmental Issues" class for a similar purpose as well. There are some issues where students may be shy about expressing their views and will only reveal what they think anonymously. In "Thinking About Sexuality", we do a whole section on pornography. It's interesting to find out how many students in the class consume pornography and at what rate. Furthermore, I can ask only male students or female students to respond to get more detailed information. To my surprise, quite a few women in my classes consume pornography on a regular basis. None of this information would have been exposed without clickers.

They'll say it with the clickers; they think it's wrong. But, when you ask them why, they're still ashamed to talk.

Using clickers is not a foolproof method. I can't be sure that students are honest with themselves when they are clicking, but at least, I'm getting the answer that they are ready to put forward. I also feel that the use of clickers has allowed me to develop more of a bond with students and to discuss things with them on a deeper level. I discovered there were fewer taboos. I think shyer students felt more included since they were able to answer, albeit anonymously.

One thing that I don't like about clickers is I have to come to class earlier to make sure that they are functional and if they don't, I have to restart them. It's a lot of work to ask two questions during the whole one hour and fifteen minutes of the class. To save time, I don't go through the process of asking students to sign out the clickers. I just pass them out. The other shortcut that I've discovered is for identifying dead batteries. I've asked for big bags to be put in the clicker kit. I can put the clickers with dead batteries in them, so AV knows to recharge those. We have a few extra units in each set for these situations. 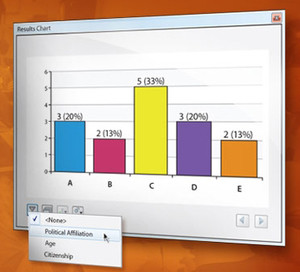 Example of responses to a question

Despite generating anonymous responses using clickers, it's still really hard to get students to talk about their views if these views are minority views or deemed politically incorrect. For instance, in class, we discuss students' perception of homosexuality. Before we look at the material, I ask for a clicker response to the question, Who here thinks that homosexuality is immoral? Let's say there are six people who think it's immoral and twenty-four others who think it's fine.

Following this, I have a gay man and a lesbian come into the class as guest speakers. Then we look at all of the arguments against the moral permissibility of homosexuality and responses to them. No one indicates that they feel that homosexuality is immoral, when I gauge opinions verbally. Once we've looked at all the arguments, and I ask for a clicker response to the same initial question of whether anyone thinks homosexual sex is immoral, however, the numbers don't change. In one class there was one less person who thought it was immoral. The others didn't budge in their opinion in spite of everything. Students were not willing to defend their views verbally, probably because they knew they were a minority in holding such views, but it could also be due to their not feeling proficient enough to express themselves effectively. They'll say it with the clickers; they think it's wrong. But, when you ask them why, they're still ashamed to talk.

As frustrating as this is, I feel "Thinking About Sexuality" is allowing students to explore these issues at an age when they're ready to look at them. No matter what they say at the end of the class, they're probably evolving, and I feel that using clickers helps them to expose their inner turmoil in a manner that is both anonymous and honest.

Are there situations in your classes where using clickers would allow you to discuss issues that would be impossible without the anonymity that they offer?