Gaming in a Second Language Classroom

I have been teaching second languages for over 10 years and I have always struggled with teaching and evaluating oral interaction in the classroom. Oral interaction is a second language skill that people use in everyday tasks like talking on the phone or meeting someone new at a cocktail party. It requires the learner to quickly exchange information by speaking with a partner and understanding what is being said in real time. Oral interaction also demands that learners improvise as the conversation's questions and answers can go in an infinite number of directions.

As you might imagine, oral interaction is not easy for second language learners to master. This is compounded by the fact that we, as teachers, do not have a lot of fun and easy-to-set-up exercises to help our students develop this skill.

About two years ago, I came up with a negotiation game in order to tackle this hole in my curriculum toolbox. During my MBA, the negotiation class I took was my favorite because it was almost entirely hands-on as I negotiated salaries, geo-politics and real estate with and against my classmates. Based on that experience, I thought that a simplified version of the game, where students could negotiate for laptops, apartment rentals and hockey tickets, would develop the oral interaction skills that I struggled to work on with my second language students. I was cautiously optimistic that this classroom learning could also translate into real world abilities.

After playing this classroom game, I was hoping that my students could talk on the phone more effectively, have more confidence in face to face conversations and even get better prices at local flea markets.

A Tutorial of the Online Version of the Negotiating Game

I first made a paper version of the negotiation game that I tried out with approximately 200 students and 4 different teachers. The results were overwhelmingly positive. Students loved the dynamic learning and they loved working with their classmates. In fact, I designed the game so that collaboration, as in exchanging information about the product and reaching a deal, earned students 80 % of the game points. On the other hand, only 20 % of the game would be competitive (i.e. getting a better deal than your partner). Promoting classroom collaboration and making competition secondary was crucial to convincing teachers to try the game in their classrooms and to motivating students to keep playing the game.

Despite all the positive feedback, the game was still paper-based which meant it was bulky for teachers to implement and did not lend itself to repeat playing for students. The testers, both teachers and students, made it clear in the feedback that the game needed to be made into a mobile and / or web application.

To do this, I needed some funding. So I wrote a business plan and entered the McGill Dobson Cup which invites teams throughout the university’s network to test their entrepreneurship skills. Out of nearly 100 teams, I won 2nd place as well as $9000. This was great validation for my idea, but the real work lay ahead.

Over the next several months, I slowly turned this paper game into a web application which meant learning about programming, user-experience (UX) and the devices that the game would run on. I hired contractors from all over the world - India, England, Kenya, China, Canada and the United States. For contractor referrals, I relied on client feedback on sites like Elance as well as speed and accuracy evaluations from code-testing sites like Codility. 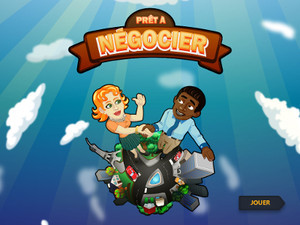 I made every mistake possible from insisting on useless features to straight-up poor planning. In my defense, some of the issues I struggled to overcome like finding a latent and echo-free audio chat solution, getting around firewall issues in language labs and overcoming wireless connectivity bottlenecks in schools also stump many senior programmers.

Once the web application and graphics were completed for a basic apartment negotiation, I tested the prototype out in 6 different classrooms. The feedback was really positive once again. Students and teachers stayed after the bell to keep negotiating. It’s like a real game, but I am learning something too! said one French student before running over to find a new negotiation partner.

We are currently in the process of budget and timeline estimations for a prototype release date. In order make the vision become reality, we need more hard work, laser-like focus and a little bit of luck.

Recently, a young game mechanic and artist made screenshots for the next iteration of the game adding avatar personalization, a seller upgrade feature and missions in order to motivate students to keep negotiating over a longer period of time (i.e. a semester or a year-long program).

Additionally, a PhD in Applied Linguistics, Dr. Michael Zuniga, who has worked on this project since its inception, designed a teacher reporting system which, on a single screen, will identify students who need help in specific areas like exchanging product information, reaching deals and winning negotiations. This way the teacher can see the students’ performance in real time and tailor effective help accordingly.

Launching into the Market

Now we are gearing up to make the beta version of the game for iOS, Android and browsers in both English and French. The negotiation items will include cell phones, computers, flat-screen televisions, apartment rentals, cars, and hotels. For the listening part of the game, students will be able to listen to negotiations for those same items between native speakers with accents from all over the world.

Based on the basic web application and most recent screenshots, we have received a lot of interest from teachers, schools, language organizations and for-profit companies that want to test the prototype with the goal of buying the game once it is completed.

We are currently in the process of budget and timeline estimations for a prototype release date. In order make the vision become reality, we need more hard work, laser-like focus and a little bit of luck. I’m wondering if Profweb’s readers have any advice and / or contacts for us on this venture.