Fun and Games Using IT

Teaching the discipline specific business administration course in ESL is always challenging because the teacher must get a group of students to improve their English abilities in a field where the students may have more knowledge than the teacher about the material being covered, and the language level of a group is frequently extremely varied. This was my second time teaching 3c3 - future office workers - and I was looking for an original, and less teacher centered, way to review what we'd covered during the term: office vocabulary, message taking, voice mailing and so on. 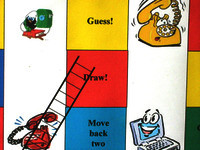 A closeup of one of the games students created.

I can't say whether it was a flash of inspiration or just a desire to do something different, but I suggested that the class divide into 3 groups, one of 3 and two of four,groups and that each group create a board game called ‘The Office'. As the students were brainstorming and looking for ideas, off and on the computer, I explored my own screen looking for templates, thinking a computer generated image would make their games that much more attractive. Here is one of the sites I found, after I'd typed FREE BOARDGAMES PRINTABLE TEMPLATES: 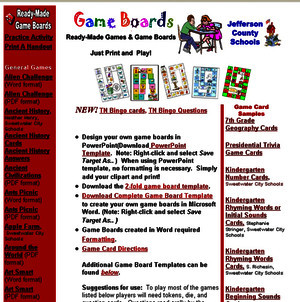 The net is riddled with similar sites! But this one, from the Jefferson County School Board, was my favourite., because the templates were quick and easy to download and print.

The class produced 3 games, two that imitate Cranium and the other called WHO WILL BE BILL GATE'S GATES'S NEXT ADMINISTRATIVE ASSISTANT? This one had a lot of humour in the works with situations like: " you have missed too many days of work. Miss two turns!" or " Your manager wants to give you a pay raise, play again." The other two games, Cranium style, dealt more with office vocabulary and definitions.The teams took turns playing each game for about 45 minutes and I have to say, I was totally amazed at what I was hearing. They were talking away, with much more ease and far less hesitation and mistakes than if they'd been in front of the class being evaluated. I had a first glance at the games, checking for spelling and grammar, but evaluation was solely peer, with aspects such as presentation, clarity of instruction, duration and content (did it cover the material?). They were doing great! I've kept the games that were graciously offered to me in hopes of using them during another term of 3C3. 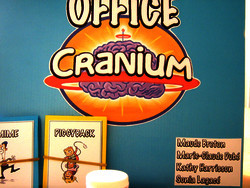 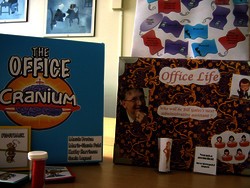 An overview of two of the games created by students

While writing this story, I've realized how much IT I actually used with this class. For example, as a mid-term oral, the students had to explain the ins and outs of the Office Suite (Word - Excel - Power Point). As they were putting their orals together in groups of two, again, I explored the net to find a myriad of HOW TO samples on YOU TUBE. Thinking they might like to watch and listen to some samples of what they were actually being asked to do, I projected one of them on the lab screen to show the students. They were totally taken by the idea. They spent a good part of that classroom time watching a few of these clips and imitating. Two classes later, the oral productions were dynamite and they were not adlibs. They had the lingo down pat. Finally, I had students listen to a variety of job interviews / how to prepare job interviews from YOU TUBE, but from different countries where people speak English with different accents. And that caught their attention, big time!

In conclusion, my dear fellow colleagues, writing these lines made me realize that I had remained connected for teaching purposes without even realizing it. All this illustrates the omnipresence of IT in our daily lives. Students navigate toward the computer as if it were second nature, and I must say, I rarely need to give any instructions. The kids KNOW what to do and where to go, and they like it! Student engagement is definitely stimulated by IT experimentation.