Four Great Reasons to Use the Web for an Astronomy Course

Did you know that our solar system now contains five dwarf planets? The last recipient of this designation was named after the Hawaiian goddess of childbirth, Haumea. It has a bizarre shape, a bit like a big egg. The four other dwarf planets are Pluto, Eris, Makemake and lastly Ceres, which is in the Asteroid Belt.

Certain people see Sedna as the next candidate for this category, but at this time there is not enough known about this body to make the call. Excluding Ceres, the four other dwarf planets are all plutoids, a new term adopted by the International Astronomical Union on June 11, 2008 to designate dwarf planets similar to Pluto. 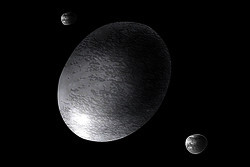 Three of the four advantages of the Internet are illustrated in the introductory paragraph of this text and are described below. It is simply impossible to update an introductory text on Astronomy or Astrophysics as effectively as a website. Quickly updating material is a primary advantage of the web.

Clicking on the hyperlinks for the names of the dwarf planets immediately reveals the second advantage; teaching Astronomy without photographs is like cooking without seasonings. Websites can economically contain hundreds of photos: however, textbooks containing this material would be prohibitively expensive. 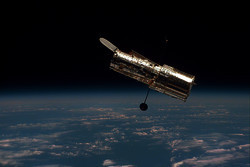 The third advantage is that using hyperlinks provides students with a way to deepen their knowledge without having to go to the library. Reliable Astronomical information on the web is vast and easily accessible. For example, NASA's site contains hundreds, if not thousands of pages. The site of the Hubble Space Telescope is as impressive. Nearly all the major astronomical observatories also have a website, such as that of the European Space Observatory which is particularly rich in multimedia material.

Finally, websites can contain useful animations and videos. An illustration of the effectiveness of this feature is an animation on my website in French of the seasonal change in the trajectory of the Sun in the sky which students can control manually. Try to demonstrate this on a blackboard! In retrospect, I regret not having learned how to use a program for three dimensional animation or not having consulted a specialist when I made my site. A look at my animation of precession movement on the second page reveals that a lot of effort can go into a not totally convincing result.

In English, there is a wealth of stimulating videos to show students. Finding French language videos on Astronomy that hold the interest of students is not nearly as easy. Radio Canada's Découvertehad a great production called 'Le télescope du mont Paranal'. It's not every day that the top of a mountain is excavated to install four telescopes that are eight meters in diameter. 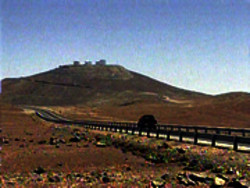 I have spent hours making my course website. For an elective course, material has to be eliminated and the choices are not easy. Originally made as a PowerPoint presentation-style summary to provide backup information, content expanded over the years to the point where the purchase of notes for students taking the elective course is no longer required. I'm planning to incorporate supervised computer-based projects for this course as well. I'm currently rather successfully using material from CLEA (Contemporary Laboratory Experiences in Astronomy, Gettysburg College) for my Astrophysics course. These students have the experience of using a telescope and a radio telescope as if they were actually in the control room of an observatory. Generally, they do more than is required of them!

In conclusion, I would be thrilled to see my website used by another Physics teacher. This will happen in the Winter 2009 Semester when my young colleague Martin will take over the elective course on Astronomy at Cégep de Valleyfield. I'm looking forward to receiving Martin's comments and suggestions and would appreciate yours as well. I will soon retire and anticipate having the time to not only do the fine tuning but perhaps to finally learn how to do 3D animation as well.