Foodservice French and English: a lexicon for hospitality students

This story is an interview by Profweb's English Editor, Norm Spatz.

NS : Why are you doing this project?

DB : The short answer is because there’s a need for a resource like this; what’s available simply doesn't meet the needs of ITHQ hospitality students. The ITHQ, a French-language cegep — actually it’s more than just a cegep — trains students to work in pretty much every aspect of the hospitality industry, and the ability to understand and use food terminology in French and English comes up again and again. Once they’re in the workplace, as interns or graduates, they need to be able to communicate professionally in English, which also happens to be a global language, with clients, colleagues, suppliers and superiors.

Send your suggestions for terms to Diana Bruno or e-mail her at bruno-diana@ithq.qc.ca.I’ve looked at numerous general and specialized print and web materials, in French, in English, French-English, English-French, some in both French-English and English-French, others with one or more additional languages, and all of them fall short of what’s needed for a whole bunch of reasons.

NS : How is your lexicon going to be different?

DB : I hope it’s going to be what I think of as ‘one-stop shopping’, that it’ll give students, and my colleagues, the answers they're looking for in one place. I see it as a French-English, English-French reference work and a classroom text. It will be produced as a book, old technology, and of course, in one or more electronic formats, definitely as an app, new technology.

I’m designing the lexicon with a pedagogical slant. There’s a translation equivalent for each term, and grammatical information such as parts of speech, irregular plural forms for nouns, count or uncount on the English side, masculine or feminine on the French side, alternative spellings, etc.

Certain types of terms have explanations. Suppose you know that Homard Thermidor is ‘Lobster Thermidor’; this doesn’t mean you know what the dish is or that you can explain it to a customer trying to decide what to order for lunch. Also, each term is categorized in one or more of the 28 themes; ‘Homard Thermidor = Lobster Thermidor’ comes under dish, dedication and shellfish+.

Fish and shellfish present a challenge in polysemy (the same term refers to different realities) and synonymy (different terms refer to the same reality). Using the scientific name, which is Latin, is the only way to untangle the overlapping forms or meanings. On the Atlantic coast, a littleneck is the smallest size hard-shell clam, Mercenaria mercenaria, while on the Pacific coast it refers to a different genus of clam, Protothaca staminea. Imagine the result when a food buyer orders littlenecks from a supplier and they’re not talking about the same clam! On the other hand, Norway lobster, Dublin Bay prawn and lobsterette are all Nephrops norvegicus, or langoustine in French and interestingly, on most menus, they’re scampi, an Italian word.

There’s also geography, or language variety. In Quebec, morue means cod; in France, cabillaud is cod and morue means salted cod, which is morue salée-séchée in Quebec. Back to your first question: most food lexicons cover British English and French French. This project gives priority to the North American reality, and identifies terms as Canadian, American and/or British English, and Quebec and/or French French.

DB : I have to go back a few steps. This lexicon is supported by the Centre collégial de développement de matériel didactique. Once a year they call for project proposals, accept a limited number and assign a project manager to help make each project (e.g., book, software, website) a reality. The CCDMD targets projects for courses where student numbers are too low to interest publishing companies.

I’ve been happily working with Nick Birks, my project manager, who guides me through CCDMD protocols, provides tech support and gentle reminders about the forest when I get lost in the trees. It starts with writing the proposal submission, project design specifications, analysis of a focus group survey, before finally working on the project itself. 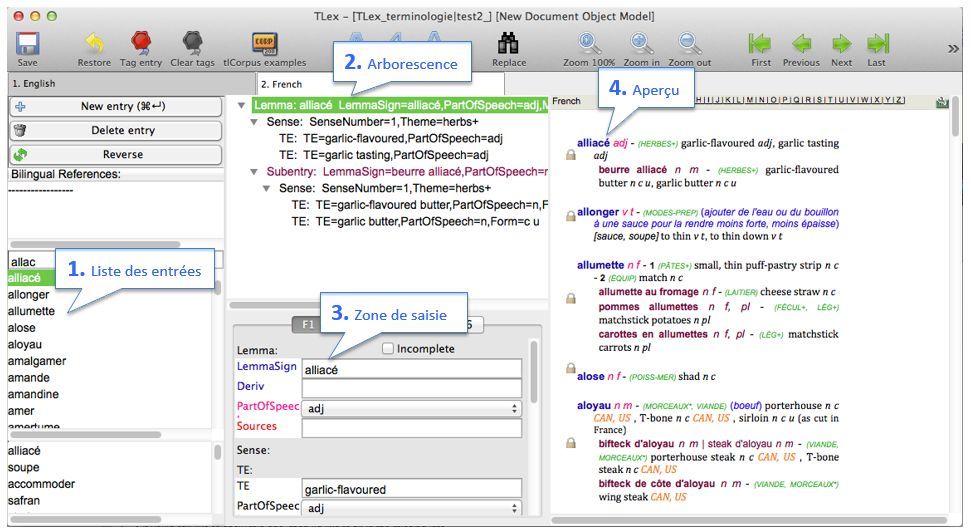 The lexicon now has about 1200 terms, or 6 million individual elements of information. I enter lemmas, or terms, in a dictionary compilation and production software from South Africa called Tshwanelex. Take a look at the screen capture of tLex; it’s wonderfully versatile software, pure joy to work with, especially with Nick’s ‘virtual’ support.  We regularly have screen-sharing multi-hour Skype meetings where we collaborate on how to organize the content, what to include, what to exclude, and more. Lexicon-creation is more of an art than a science, Nick likes to say; after one thousand hours plus, I appreciate what that means.

I don’t know what the final number of terms will be, maybe 3000 in each language, maybe more. It’s an iterative process. I’m still at the crucial foundation stage; I research and enter terms, review and revise earlier terms, and check for consistency within and across every information category. When that’s done, external language and content specialists will check every piece of information for accuracy and consistency, after which a graphic designer will prepare the content for publication in print and electronic formats.

When the lexicon is finished, it won’t be completely finished. It’ll need periodic updating to add terms to the first print and electronic versions. Even at this stage, I’d be delighted if Profweb readers and their friends engaged in a little crowd-sourcing and sent me suggestions for English and French terms.

NS : What’s your fantasy for this project?

DB : LOL, apart from it becoming a runway bestseller, I hope that ITHQ students use it at school and in the workplace. With more and more TV cooking shows and competitions, growing interest in organic, fair trade and sustainable food practices, lots of foodies, you could make a case for a market in the general population here and internationally.

My other fantasy is that the CCDMD likes the lexicon so much they’ll support my next project, a French-English, English-French sommellerie lexicon.

Send your suggestions for terms to Diana Bruno or e-mail her at diana@culinarydictionary.ca.