Facilitating Dialog Through IT

Socratic exchange, dialectic and its related schools of thought, the ethic of shared communication and all Western philosophy are intimately bound to the concept and the activity of dialog. Eastern philosophies are also frequently linked to this methodology. One must therefore wonder what place this venerable activity has in our classes. 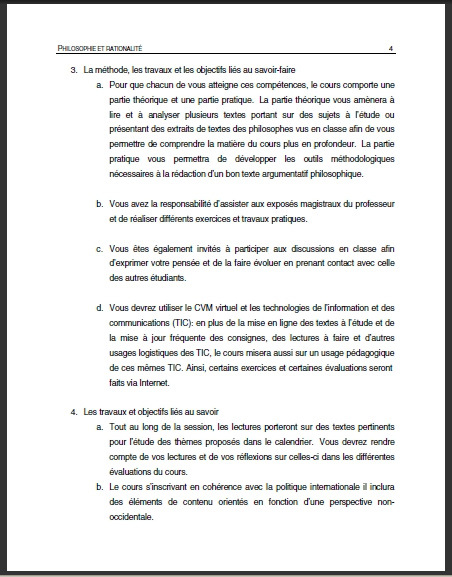 The course plan (in French) with a paragraph about using IT

During the 2008-09 academic year at Cégep du Vieux Montréal, Sophie Tremblay, Xavier Brouillette, Victor Drouin-Trempe and myself developed a project to foster student success in the first course of Philosophy, which is an obligatory core studies course in francophone colleges. This project's principal goal was to update this traditionally challenging course in a manner that went beyond standard classroom activities. It seemed that a part of this transformation would involve bringing the communication tools of the course in line with the technology currently being used by students. In our age of communication by chat, text messaging, blogs, Facebook and Twitter, profiting from developments in communication technology to make dialog, the oldest aspect of the study of Philosophy, more pertinent seemed like a logical point of departure.

The future of the Internet becoming the vehicle for a renewed philosophical dialog, among its other uses, is bright.

A quick look around any cégep will show cellular phones in abundance. A trip to the computer lab during free study will reveal two screens out of three on Facebook or another instant messaging service with, of course, a window of academic work in the background. Students are increasingly communicating and doing so thanks to electronic media. How could this compulsion to communicate be channeled toward a true philosophical dialog, meaning an exchange of ideas, a shared examination of fundamental questions, mutual exchange and constructive criticism? Even if the traditional classroom remains a key location for such exchanges, virtual resources such as round tables or research communities (A French language virtual community of use for philosophical research for children worth noting is l'Observatoire Virtuel Collaboratif) which are familiar environments for students offer unexplored possibilities. 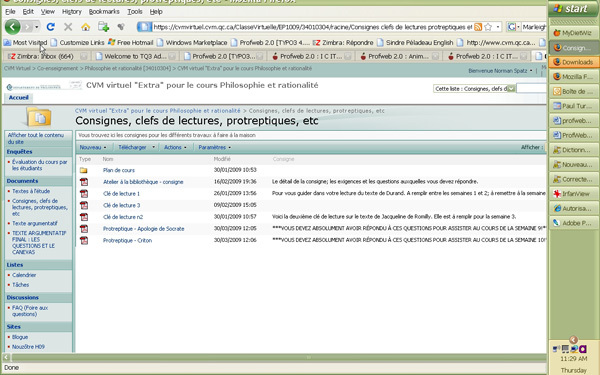 At the Cégep du Vieux Montréal, the bulk of network communication functions using Microsoft SharePoint. There is a basic course management system in use at the school, a modified form ofSharePoint, which is called CVM Virtuel. Working with the computer office, the Direction des technologies de l'information (DTI), we were able to develop an enriched version of the platform which essentially offered the same functions as the majority of mainstream course management systems such as DecClic or Moodle. There was a document library, a discussion forum, a blog, a wiki, a calendar, a task list as well as other features. The approximately 300 students of the four professors who participated in this program were grouped together on the same homepage in order to create as large a community of practice as possible. Our objective was to create a space where students could engage in philosophical dialog. The following activities were developed to promote this activity:

1. A First Analysis Using a Wiki

In groups of four, students had to co-write an analysis of the sophisms, of the false reasoning, present in the media. The construction of the wiki is reinforced by a forum for members of the team where they can discuss the development of the content of the wiki.

If one teacher is good, four are better! Questions on any subject, except personal matters, could be posted by students in the FAQ section. As soon as a message was received, an alarm rang in the inbox of the four participating profs, and the race was on to generate an answer. Students received answers in an extremely short period; teachers were able to share the task of responding. Priceless!

At least each week, elements that could enrich student reflection on topics discussed in class were added to the blog. Content included videos, images, links to other blogs and anything else that could incite students to better understand. As with any blog, comments were welcome and encouraged.

Without a doubt, the forum was the most successful and most involved activity. Students defended a position synthesized from topics presented in class within the framework of the discussion forum. Afterwards, each student had to question, if not critique, fellow students and in return, respond to remarks targeting their own contributions. This type of forum, which was ideal for those who found this kind of exchange made orally a challenging affair, produced nuanced, intelligent exchange and criticism that remained open and constructive. It bore a perhaps not so surprising resemblance to the philosophical dialog discussed above.

Obviously, each of these activities merits a more exhaustive discussion of its academic advantages, and there is a growing body of information on these resources. In regard to the precise goal of this article, however, it is conclusive that we were able to instill a culture of philosophical dialog using information and communication technology in our students. A rapid survey indicated an appreciation of the blending or perhaps one could say the intrusion of philosophy into their everyday means of communication which could become as valid a location for philosophical thought as the classroom. Without yet speaking of the new agora, the future of the Internet becoming the vehicle for a renewed philosopical dialog, among its other uses, is bright.