I teach biology which is very much a “memorize first, and then use the vocabulary to tell me about the understanding” kind of subject. It’s sometimes hard to get to the understanding if someone’s caught at the “I don’t know my words yet and how they fit together” stage.

To give my students a working vocabulary, a part of many tests is an essay. I don’t mean an essay using original ideas and research. Students have to competently reformulate a concept that I teach in class explaining processes such as the homeostasis of blood gasses. I post the question on my forum in LEA before an exam. When students post an answer, I correct their essay formatively.

Often when they write about a subject that I’ve presented, it is surprising how far off they are at the beginning. I’m really trying to ensure that they can write out what they heard orally to build biological ‘literacy’. This can take weeks of marking and remarking so that by the time they do write the same story in the test, it’s perfect. Students must understand those principles to be able to discuss them in a meaningful way.

Our college was hosting a workshop about online learning, when one of the students at our table mentioned that they would really like videos, like on YouTube, rather than going through the awkwardness and hassle of having the teacher repeat the same thing many times during an office hour. I realized that if students could review basic information until they felt comfortable, when they came to see me at my office hour, it would be for deeper comprehension rather than me just repeating the same thing that they didn’t quite get in class. Here is a video made using the SmartBoard on homeostasis of blood gas concentration.

That is the reason that I’m now using the SmartBoard to record the most important topics that I present. Mentioned above, the first one discussed the homeostasis of blood gas concentration. The second one tackled the cardiac cycle. And, the third one tracks the transcription and translation of a gene to a protein. I know these concepts need repetition.

These videos, however, are not a flipped classroom approach. I’m covering material that I have already taught in class. In class, however, I explain every concept in detail. In the brief videos (less than five minutes), I’m not explaining concepts in depth, I’m just ordering stages and giving pointers on vocabulary to retain. This is not a polished presentation, and students couldn’t watch the video and just work by themselves. They have to come to class, but office hours can then be used to focus on diagnosing elements that have not been mastered or misunderstood.

In order to avoid making these not super professional quality recordings available to the general public, I have posted links to them on LEA and Moodle. I have access to more storage space to upload my files on Moodle compared to LEA. Video files are typically large but I found that SmartBoard recordings saved in wmv format are smaller than PowerPoint recordings saved in wmf format. 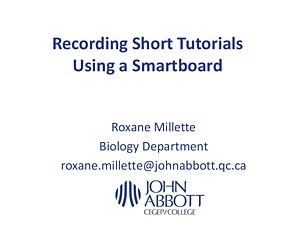 PowerPoint on Making Tutorials with a SmartBoard

LEA keeps track of how many students have consulted the file, and how often. This has incidentally allowed me to see the number of times my students download these movies. And it’s very high for what I believe are the following reasons:

Watching the videos helps students gain the motivation to start writing their essays, but most of the work happens in the forum. The forum is where they really do most of their learning because they see themselves making the mistake. Even if I forewarn students of a mistake that they will make and why it’s wrong, they’ll make the mistake themselves before mastering the material.

I use the LEA and Moodle forums. The LEA forum is less ideal because the posts are not threaded. For example, sometimes when I post to the second student who responded, my answer is input number 10. It’s very hard to keep track of, and for educational purposes, I would prefer a threaded forum. Students also initially find the forum threatening, and they don’t like posting in a public space, so I make it worth about half a mark, and then I have participation.

In conclusion, I feel we really need to address multiple information technologies in education. It’s not just about the SmartBoard or about the forum. It’s the content that is produced as students move between the two of them to produce the essay that I want written which can really fix terminology and expression to allow the learner to express themself professionally. I want a student to speak like a biologist, and we have to practice that together using whatever it takes to make that content meaningful.

What technologies have you used in tandem to create a learning scenario?