Evernote – Note Taking and Beyond

A presenter at the Canadian International Conference on Education (CICE) held in June 2014, Emily Beaumont shares her experiences using the cloud storage system Evernote for both for academic research and as a teaching resource in the classroom.

Evernote was on a list of apps that was recommended to me when I first got my iPad. I downloaded it, had a bit of a play with it, but at the time couldn't really see how it would work for me. My first attempts at using it weren't overly successful but after updating my iPad, and with an updated Evernote app I had another go at it. I found it much improved, and at that time, I understood how to use it in my practice a lot better than before. So that's how I came to find Evernote.

A Quick Tour around Evernote 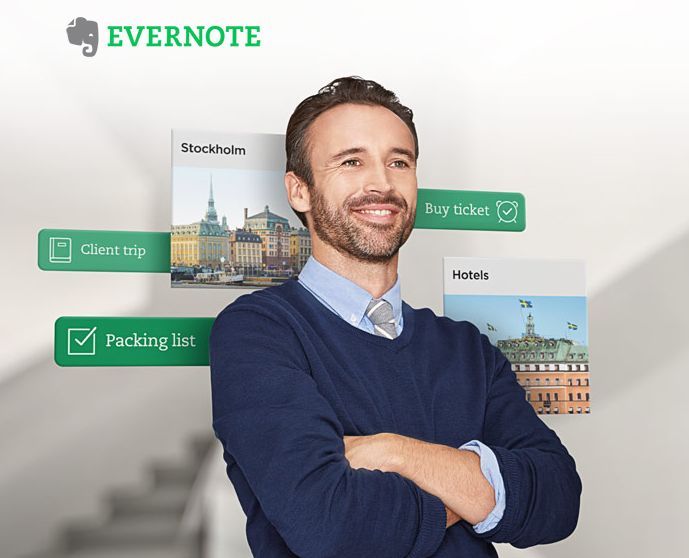 For everything you’ll do, Evernote is the workspace to get it done

Evernote works like a filing system of numerous notepads. Each notepad can be given a name according to the subject or discipline you are keeping notes on. Within each notepad you can keep written notes, verbal notes, hyperlinks to websites as well as clips from the web. What's really great is that you can search within the notepad to find what you need. You can then come out and start a new notepad for whatever you're doing, which I find quite useful.

Furthermore, Evernote is really easy to navigate because there are layers, and you can label those different layers of notes that you go into. You can then quite easily follow the titles to get back to where you want to get the information that you require. Or once again you can use the handy search function within it to search and find what you need.

The other brilliant aspect of Evernote is its universality. I've got it on my iPhone, my iPad and on my laptop. Each device syncs with the other, therefore if I'm out and about, it's much easier to take a photo for Evernote with my iPhone than it is to get out my laptop or get out the iPad, but when I'm sitting in a conference, I can use my iPad to take notes, and when I get back to the office, I'll have all that information on my laptop thanks to Evernote's synchronous ability.

Evernote in the Classroom

Evernote is something that I want to bring into my teaching. At the moment I'm using it for research, conferences and meetings about teaching, but I want to encourage my students to use it and to improve their practice. Maybe they could use it at each lecture and have a notepad for each module to store links, photos or a video of the lecture. At the moment, that is the prime use that I see for Evernote, but I have the feeling that once we start using it, other possibilities would present themselves.

To introduce Evernote to my students, I think that I would have to build it into an assessment for them. Say we were asking them to organize an event as part of their assessment. What we could get them to do is to keep an Evernote notepad for the overall event and then each note could be a meeting or an occurrence in the organization of the event. It could be that students video record or transcribe their meetings, or insert an e-mail that they've had about the event. They could then hand in the overall Evernote notepad as their assessment. As assessors, we could see how the event was organized, how it was all put together and the interactions that they had.

Because you can share notepads on Evernote, submitting assignments is quite simple. We deal with a lot of electronic hand-ins at Plymouth University (UK), and we can get students to email their notepad in from Evernote. Outside of an assessed piece of work, I would encourage my students to share their notepads amongst their peers with Evernote's easy sharing capability.

Despite my initial reservations I have encountered very few negative aspects using Evernote. I haven't maxed out my storage yet, but there might be a limit beyond which you have to pay to have a little bit more space. I can also imagine that if you don't organize your notepads properly or the information as you're putting it in, then it will be hard to extract that information in the future. But that's user error; that's not a problem with Evernote.

In closing, I would just like to emphasize for Profweb's readers that if you don't get Evernote the first time, do try and stick with it. You have to make it work for you. Don't try and fit into what it wants you to do. Use it the best way you can, and then it all comes together. I think the first time that I used it I was very much trying to stick to the way that Evernote was suggesting that I use Evernote, and once I figured out how to use it within my practice, it became a lot more user friendly to me and a lot more worthwhile. Before Evernote I had random notes in my iPad which were very hard to organize, now I have everything stored in one place making information easy to search and find.