I’ve been teaching in the Industrial Electronics Technology program for 23 years at the Cégep de Lévis-Lauzon. Robotics have interested me for a long time and I have updated my knowledge of them through private study over the years. When the 2 exit profiles for Industrial Electronics were combined (Electrodynamics, Instrumentation and Automation), each CEGEP offering the program created its own course grid based on the 19 ministerial competencies. It’s within this context that the department introduced the Positioning and Robotics course (Positionnement et robotique) in 2008. Then, in 2014, an Attestation of Collegial Studies in Industrial Robotics was born at Cégep de Lévis-Lauzon, after we combined our efforts with those of the Cégep de Victoriaville.

I juggled with the idea of offering an introductory robotics course for a few years. An opportunity to turn the idea into a reality came along when the Cégep de Lévis-Lauzon revised its complementary course offering in 2005. Students have to choose from a list of complementary courses and could choose any course that was outside of their program of study (Mechanical Engineering and Industrial Electronics were not eligible to take the course, since these programs already offered robotics courses).

For the Robotics course to be chosen as part of the complementary course offering, we needed a way to make the subject attractive enough for the students. The groups that I had the responsibility to teach were largely comprised of students that had just arrived from high school and had already, for the most part, some technological knowledge. I wanted to make robotics accessible to students from any discipline, regardless of their level of prior knowledge of technology.

I worked on implementing this project with Gilles Leblanc, an Education Advisor. We decided to call the new course Légorobotisation, a combination of Lego blocks and robotics.

We wanted the title and course description to harken back to concepts such as childhood and play, so that they would be associated to something positive. Our objective was to get the student body interested in electronics and robotics using material that is already familiar to them, and which isn’t difficult to understand. We wanted to facilitate the knowledge.

There are several educational robotics products on the market that may or may not require programming: 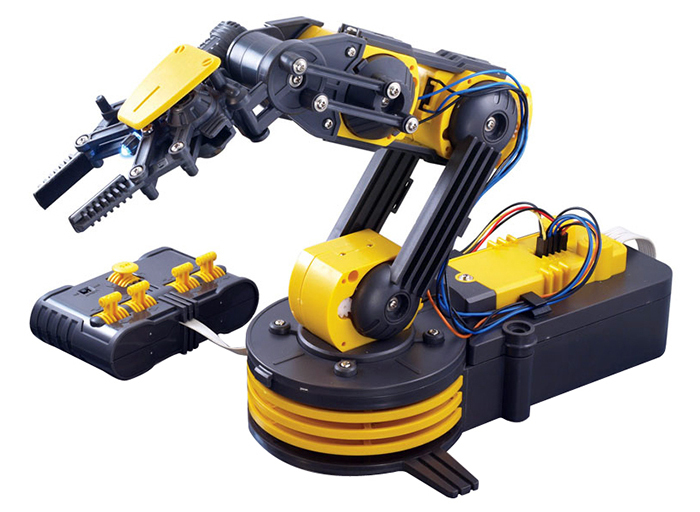 An example of a robot that does not require any programming from the user. The robot responds to the commands from the remote control.

For our introductory course we chose the software Mindstorm RCX, since it is compatible with Lego blocks. The students could even bring in their own! From the very first year we offered the course, we were able to reach students from a variety of fields. 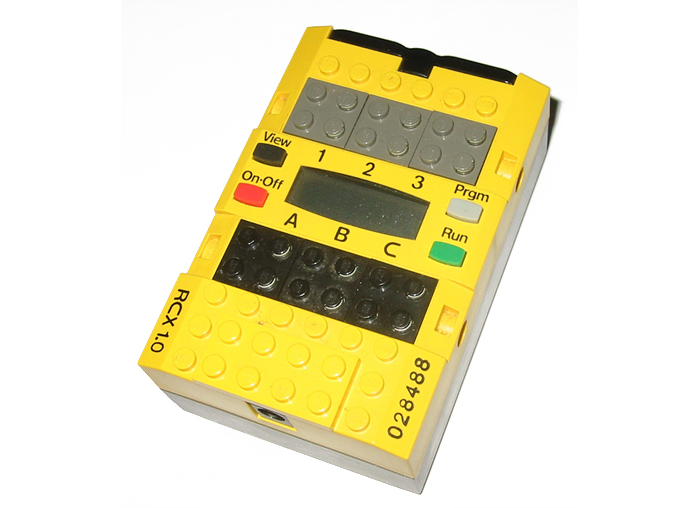 The Lego Mindstorm RCX brick. It has a visual application that allows you to execute commands.

Each week I offered a different theme for my classes that was incrementally more challenging (and included a different task to execute). For example:

To complete these tasks, the students learn to program the robot using software that allows them to move “cubes” around and to execute commands for certain actions (a bit like Scratch does to initiate new users into programming). Visual programming is user-friendly and easily understood. 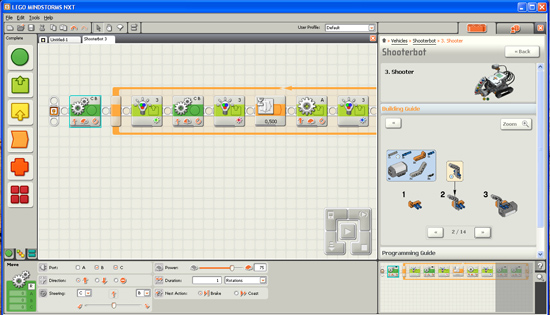 The visual programming environment of the Lego Mindstorm NXT software.

As for the students’ technical abilities, I didn’t see a significant difference amongst the students coming from the various disciplinary profiles: The students rapidly understood the technical side regardless of their program of studies.

The goal of the Robotics course is not to do programming. Rather it is to learn to resolve a technological program. One year, the students had to robotize a wheelchair using technical specifications guide (in French) that included certain constraints. The robot has to lift and move an empty can. They also had to pass a “destructive test” (is it solid enough to survive the teacher dropping it on the ground?). 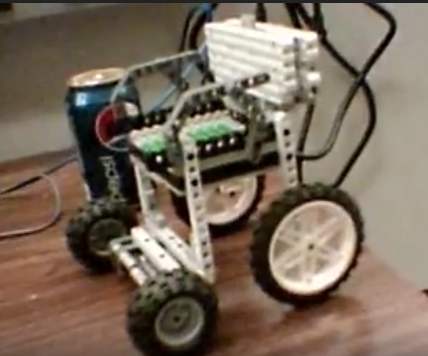 An example of a student project: A wheelchair built with Lego blocks.

Next, I asked students to adapt their wheelchair so that it could operate as an all-terrain wheelchair. As part of this new constraint, the students came up with a variety of possible solutions:

The mid-term evaluation involved making a robot follow a path. The students had 2 weeks to prepare.

The first week I let them work in teams (but they could get in touch with me remotely). The first time I expected that there would be a number of people absent. To my grand surprise, my “spies” confirmed that all of the students showed up at the electronics lab to work on their robot!

The next week, the robot had to successfully follow a path that was provided to them. The students worked in teams, but the evaluation was carried out on an individual basis. Everyone had a path to follow that was different from their team members and which also differed from the practice path that had been used the previous week, since the objective of the course was to develop the student’s ability to solve a problem using elements that are known to them.

The end of semester projects are more complex. Often they require the cooperation of all of the teams. Over the years, I have modified the challenges:

The students enjoyed a great deal of freedom when it came to the final presentation of their robot. The same project sometimes led to different results that often reflected the student's’ field of study (ex. students from arts programs put more emphasis on the aesthetic aspects of the robot).

The first year, the educational robotics course was taught in collaboration with Jean Schmouth, a philosophy teacher at the Cégep de Lévis-Lauzon. I’ve never enjoyed working in isolation. I prefer working with others and developing projects together. All of the students take a philosophy course at our college, so why not get them involved in a way that is concrete to them?

There are several ethical questions to be asked when it comes to automating with robots and artificial intelligence. This was already the case in 2005, it’s even more relevant today. The contribution of philosophy to this domain is important.

Robots are part of our environment. They can be found:

Professional and educational environments are becoming more and more interested in telepresence robots.

In the United States, MIT is developing “social” robots that are capable of imitating human expression. Many countries are also developing prototypes of assistive robots (for disabled, ill or elderly people). Within this context, there is a whole field dedicated to the human relationship with the robot, or even the affective relationship with the robots, which deserves to be explored.

Presenting ASIMO, a humanoid robot designed to assist people with reduced mobility. For the moment it is only used for promotional purposes.

On the other end of the spectrum there is the use of drones or robots within military contexts, where it is becoming possible to remotely intervene using machines (almost like a video game), which also brings its share of ethical questions.

To allow students to reflect on these questions, Jean and I organized a special activity on the Friday just prior to our reading week. We invited teachers from other disciplines to participate, most notably including mechanical engineering and social science. Each teacher briefly presented a topic related to humans and robots. The students were then invited to debate. Gilles Leblanc was also on hand, acting as a moderator.

Example Questions for the Debates

The word robot, introduced in 1924 is derived from a Czech word which means “forced labour.” Considered to be a machine, a robot is defined by its utility to human beings. Its programming is confined to precise tasks. Are robots modern slaves?

The robot comes from a human construct. It is the fruit of logical programming whose origins stem from rationality. It represents pure logic and thus strives for perfection. The paradox of automating through robots resides within the lack of emotionality of the robot: It feels nothing. Is this what distinguishes robots from humans?

Until now, the ability to think has remained the unique domain of humans. That’s nevertheless what artificial intelligence is trying to reproduce (without necessarily compromising the privileged status of humans). Whether or not we are upfront about it, humans want someone to think for them. A robot that is imbued with a conscience, which is able to understand its capacity and its willingness to transform its environment, recognizes the place that it occupies in time and space - is this a dream or a nightmare?

It is important that the students understand, whatever their program, that robots are still machines that can be turned off. We are often afraid of things that we don’t understand. Our multidisciplinary approach aims to provide an overview, for both the technical and the ethical aspects.

The Benefits of Educational Robotics for Students

This introduction to robotics course allowed us to support different types of learning and abilities for the students:

With its fun nature and content, this course is a bit “unconventional.” The student motivation is high and translates to participation rates that are also high, even when the attendance of the students is not required.

At the beginning of the semester, I got into the habit of surveying students, using a show of hands, to see whether the class was their first choice. It was the first choice for the majority of them, but the students for whom it was the second or third choice were just as happy at the end of the semester!

Teaching Robotics in the Colleges

There are millions of industrial robots around the world. The other types of robots (service robots, telepresence, military, domestic, educational…) are also on the rise. Many objects are called robots, but are they really robots? Think about connected devices which number in the billions (toasters, thermostats, lights...). While they aren’t robots, these devices are now becoming part of our daily lives. That’s why it’s necessary to understand how these robots and devices work.

I would dare to say that we need to know how to communicate with these devices that we need to manage. The communication languages are becoming easier in such a way that they are accessible to a greater number of people. I believe that it is important to speak about robotics at every level of teaching, since the technology is changing very quickly. There are a multitude of systems that are accessible to everyone.

Jean Labbé An Electrical Engineer by Training, he has been teaching in the Industrial Electronics Technology program at the Cégep de Lévis-Lauzon since 1992. During the period that he has been teaching, he was a participant in the Cégeps en réseau project with the Cégep de Thetford. He uses BigBlueButton for blended courses (in class and on-line) as well as recording his classes to make them available at any time to his students. He wrote an article in the Clic Newsletter (in French) with his colleague Isabelle Delisle in November of 2012 on the topic and presented it at the AQPC Symposium in 2011 (which was held in Lévis. With his colleague Gilles Leblanc, he has also organized a Techno-Science day for Secondary V students. He is also an amateur astronaut and founder of the SAREL astronomy club (Société astronomique de recherches, d’éducation et de loisirs).