Eifion Pritchard, an ESL teacher at Collège Édouard-Montpetit from 1980 to 2006, was one of the first college teachers to use the Internet in his teaching, offering his students research activities on the Web. This was in 1995 when everyone used modems, and very few educational resources now available were on line.

It was not a fluke that ESL Blues won the Bronze Medal in the 2000 Infobourg award Teaching with the Web, an award of excellence given to those ingenious teachers "who help to make cyberspace a great place to learn." The jury noted the high quality of interactivity of its games, praising in particular the immediacy of the feedback obtained. Moreover, we find ESL Blues on the portal of LangCanada.ca , now hosted by the Canadian Association of Second Language Teachers (CASLT). The comments of users of EnglishClub.com justify the March 2010 nomination of ESL Blues as the best site of the month.

I realized the educational value of the Web immediately and from its beginnings, I approached the Internet as an ally. When it was suggested for the development of teaching materials online, however, there was a lot of skepticism among my colleagues. The Web was an unknown quantity, and we had a long road to travel before we would see it as a natural complement to the classroom.

Getting started was complicated by the fact that I wanted to go where others feared to tread and do the programming on my own!

This wasn't as complex as it seemed, and College Edouard-Montpetit gave me valuable assistance granting release time for the project.

The tutorial on my site is an acknowledgment of this encouragement from my colleagues as well as my college. I first developed this material by combining JavaScript and HTML, then I used Flash a little later.

The test " Asking questions / What do I do? is a fine example of the programming challenges that I encountered. It gives instant feedback and in this case, allows practice in writing correct consonant and vowel groupings. 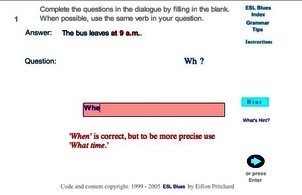 The test "What do I do?" dealing with question formation. 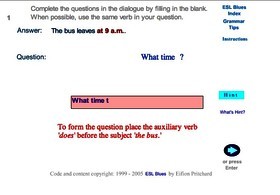 Quality feedback given in ESL Blues.

The Education Reform of 1993 gave greater importance to English classes in colleges came into effect shortly after my project started. Since then, in Francophone colleges, two courses of English as a second language are required to be passed for graduation from college.The same requirement applies to anglophone colleges for French second language courses.

At that time, my colleagues and I were faced with problems related to academic success.

We had adopted the principle of the 'double seuil' or double threshold for course evaluation. The student needed to obtain a passing grade of 60% in the final review as well as the total of all other activities evaluated. We originally did this to encourage academic review at semester's end, but an unforeseen side effect was that as of mid-session, it was mathematically impossible for many of our students to pass their courses.

We had to find a solution!

ESL Blues - A Way for Young Francophones to Beat the Blues of ESL Failure!

That was the motivation for the interactive tests on the site. ESL Blues allowed students to review and consolidate the year's material, through hours of personal study. Students printed the results of these tests which allowed us to recognize their accomplishments outside of class and take them into account in our assessment. The introduction of the double threshold created new opportunities for student review and the use of information technology allowed students to succeed in the activity!

ESL Blues has almost 200 exercises including diagnostic tests to establish a review strategy, and a wide variety of other quizzes and games including multiple response options, matching games, card links, short answers, mystery words, timed dictations as well as revision tables, animations and tests targeting grammar weaknesses, reading difficulties (reading short texts ) or vocabulary (meaning of proverbs). For instance, the section "Common Errors Explained" on the homepage contains questions such as the difference between "say" and "tell", "do" and "make", "must" and "have to". Also, the puzzle titled "Broken Down Blues" of the reading difficulties section has received considerable interest. 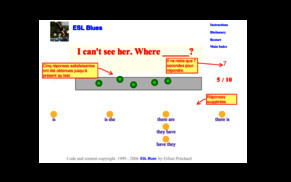 An Example of a Timed Exercise in Progress. 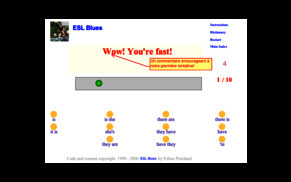 Encouraging Feedback for the Student.

The first interactive exercises were designed for beginner students. I greatly benefited from comments during language lab to improve the clarity and relevance of my tests. Subsequently, I became interested in the intermediate and advanced intermediate levels in response to my colleagues' requests.

These tests were designed for French speakers.They have little stylistic originality, therefore, and focus on basic phrases and common problems. Also common errors of French speakers are introduced and presented as Common Errors. The many emails and visitors from francophone countries show that this material is tailored to the needs of French speakers. Some universities use it.

Results indicate that among the five errors listed, four are left unanswered, this explains why one of the outstanding sentences is indicated.

Some jokes as well as cultural and historical references (Double Quizzes: Trivia and Grammar) are sometimes present in my questions.

My interests are now turning towards the iPhone and other smartphones. My frequent visits to China have allowed me to see how effective mobile learning spaces can be. I have seen numerous students studying a second language in the confined space of a bus. I have those people in mind as I adapt ESL Blues to a clientele that is not necessarily originally French speaking. Even young Anglophones, those about 12 years old, may benefit from many of these tests.

This story is a testament to Eifion Pritchard's pioneering efforts in information technology as well as to his ongoing innovations. Share your comments with your colleagues!