Creativity as a Tool for Learning Science

Deeply rooted in rationality, the Sciences have historically been placed in opposition to the Arts, a field in which creativity is recognized as playing a key role. The false dichotomy that “artists are not analytical and scientists are not creative” was engraved in the foundations of our educational system, but information technology is being used to break down these barriers. A number of my cross-disciplinary courses use asynchronous communication to give students a better understanding of both sides of these polarities.

The Art and Science Project started in 2009 when I started teaching the fourth-semester Liberal Arts course on the history and methodology of science.  Sparking interest in science is a challenge when students lack high-school knowledge and voice their disdain for mathematical formulas, numbers, units, and calculations. Traditional approaches of teaching science are not well suited for Liberal Arts students. Looking for alternatives, I found Kieran Egan’s books on the importance of imagination and creativity in fostering learning, and they became a source of inspiration. Believing in the importance of interdisciplinarity, I envisioned links between what these students know in philosophy, history, and art with science. For example, what are the links between the works of Freud, Picasso, and Einstein in the 1910’s? It’s not strictly by chance that all their revolutionary ideas came about around the same time. 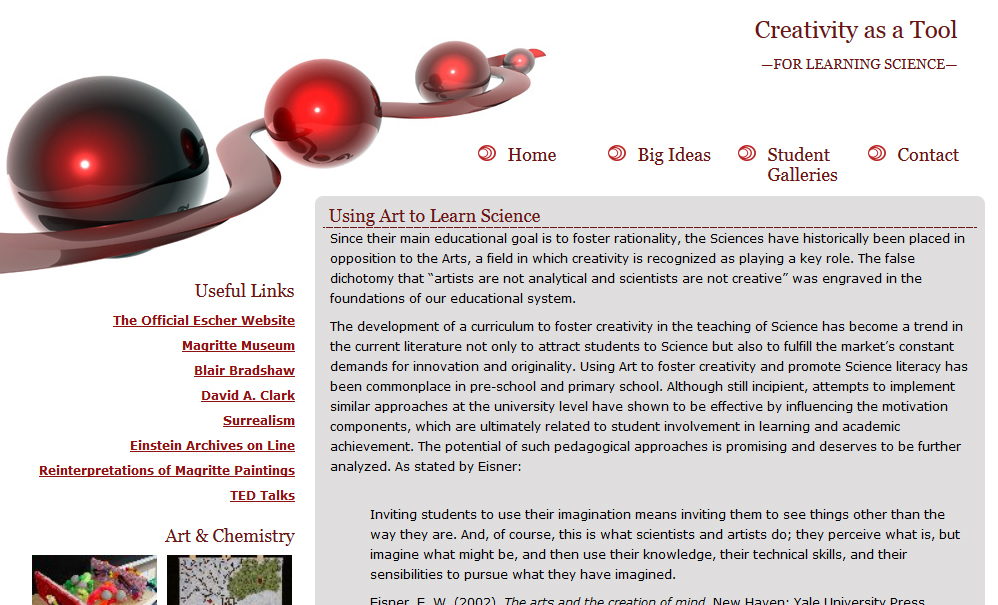 The homepage of the project's website which has been used to attract teaching participants and as a validation for student achievements.

My students were intrigued by the connections between science and art, and they started seeing science differently, as part of a complex web linked to aspects of art and philosophy and to the political and economical realities of a given historical period. Because this experience was so personally enriching, I decided to bring this cross fertilization to science students the following year.

Always seeking to explore creative assignments, I asked the first science cohort to create an artwork to portray some of the scientific concepts that had been covered in the course. A few weeks later they brought in their artwork. Collectively, it was far less than what I expected. Some of them were kind of artistic and—because these students had talent—did well. But many students did not understand the scope or purpose of the assignment. I realized that they needed more time to digest their own ideas as part of a constant dialogue with the teacher outside the classroom.

I realized that I had to have a more active role in this assignment with the second cohort. In order to provide feedback on their preliminary drafts, I used Google Docs. Using this resource as a platform for asynchronous dialogs, I asked my students to think about the course concepts that caught their attention and how they could portray these concepts using visual arts.

The quality of the artworks improved a lot because I could provide timely feedback! A student would create a rough sketch, upload to Google Docs and dialog with me. Have you thought about the symbolism of this image? Have you thought about creating a sculpture instead of painting a canvas? The exchange of ideas gave them encouragement.  I realized, however, that I was out of my comfort zone. An art teacher was needed to provide feedback with the artistic part of the assignment. 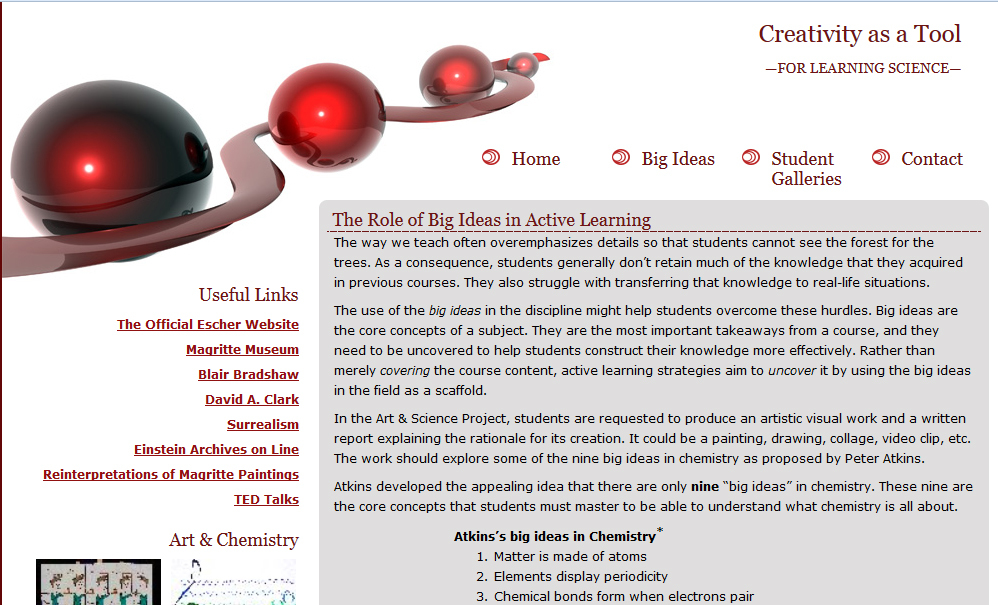 The website contains subject-specific information, but also has information for facilitating the approach in any discipline.

I tried to recruit an art teacher from CEGEPs locally and universities nationwide. I sent about forty emails soliciting collaboration and received encouraging feedback from a couple of them. One was surprised to see work like this being done at the college level in Canada. As a result of this exchange, I was invited to present the project at the Symposium on Democratic Dialogue via the Arts at the University of Ottawa in July 2012. Another response was from Michelle Wiebe, of the University of Victoria in BC, who saw the value of the project and offered to lend a hand. She has provided invaluable feedback on the art through Google Docs to various cohorts since 2012.

Google Docs is a good platform on which to develop the drafts of the artwork. Students describe the ideas they want to convey and the materials, colors, size of the work, and the techniques that will be employed. It is a milestone that forces students to become actively engaged at the initial phase of the multi-week project. It also provides a necessary channel of communication between teacher and student prior to tackling the artwork itself. Students receive feedback from two teachers: I address the scientific concepts, and an art teacher gives feedback on the art component. Google Docs even allows those involved to be in different provinces.

After handing in the final version of their artwork and presenting it to their peers, students write a self-reflective learning journal in which they assess their own artwork based on a provided rubric. They have to comment on the strengths and weaknesses of their work as well as how they would do it differently if they had the chance. In a project of this scope, process and product are equally important.

Students can profit from assessments built on strong interdisciplinary foundations. These learning experiences require students to adapt to new situations similar to ones they may encounter throughout their careers. Knowledge transfer can only be attained through a slow process of refining and debating information from different perspectives. Learning cannot be rushed because complex cognitive activities require time. 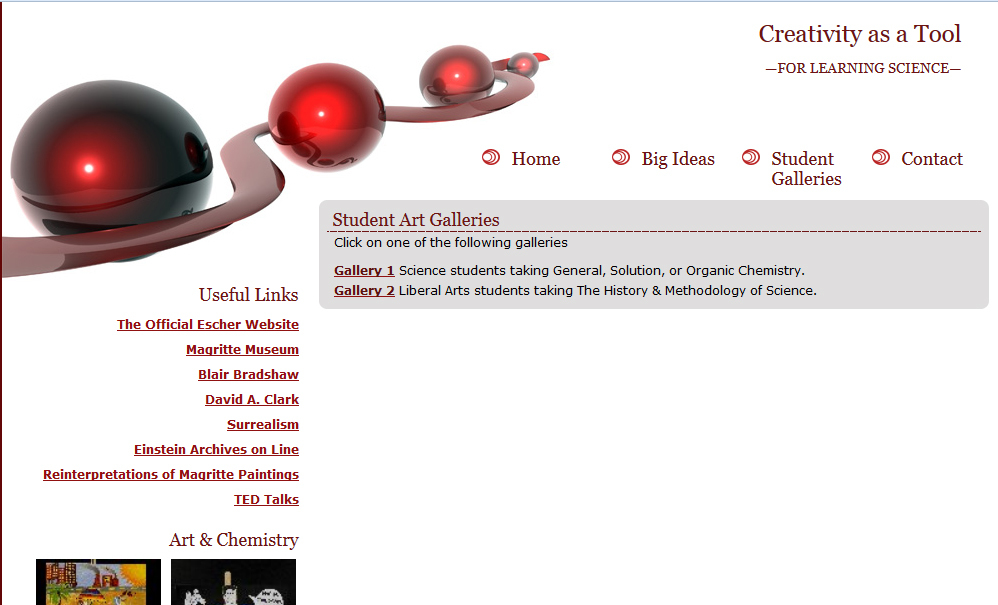 The website contains a gallery of student achievements and reflections.

Technology allows us to extend our communities of enquiry by enabling the exchange of ideas between qualified professionals from all over the planet. I knew that if I didn’t have a website for this project, I couldn’t have promoted it among other teachers. The website is also a means of validation for my students’ work by highlighting their immense creative potential and the process by which science students see art and liberal arts students see science – differently.