Using Universal Design, we have rethought our basic level courses in French as a Second Language, our tools, planning and strategies while respecting the course specification. Focusing on students with the most difficulties in our basic level courses, those who have dyslexia and dysorthographia, was the starting point. We then applied our ideas to everyone, reducing individual difficulties as well as individual accommodation. Part of this change involves incorporating ICT into our Universal Design.

In French second language, Antidote was widely used by teachers in the higher levels. Because Antidote asked questions and let students function autonomously, it was felt that at basic levels, it would not help. It was too complicated if we left students to themselves, but if we effectively integrated it within the course and offered Antidote not only to those who have dyslexia but to everyone with guidance, it could be of great benefit. 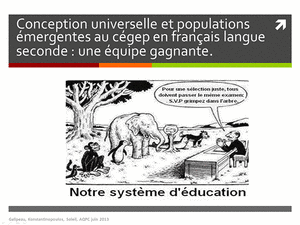 PowerPoint from Presentation at AQPC June 2013

First, we had to explain how to use Antidote to meet our students’ needs. Our problem in first level basic French as a second language is the basic sentence; identify the predicate, identify the subject, etc. To find the predicate, the student must be able to identify the verb, then the subject. Generally, Antidote won't show this, but if we go into its functions, the conjugated verbs can be highlighted and the verb tense indicated. All students, whether they have dyslexia or not, have an additional control over their texts. The verbs that they have so much trouble with are identified.

One downside of Antidote is its cost for use outside school. We have several students who have bought it, generally those who are the most in need. We see “miracles”. We hear things like, I wish I had had it before, and they do buy it.

More students have the dictionary app on their phones which costs twenty dollars. Some students are always afraid that they will not be allowed to use a cell phone in the classroom during an exam, however, we assure them they will have access and do this by explaining the danger of using Google Translate at the beginning of the semester. Initially getting a translation from Google and copying the sentence seems easier. We show students that what they copied is meaningless, however, and they lose interest. They don’t use it once they realize that it's so easily detected, and we in turn do not prohibit cell phones!

We can show students at the basic French level the tools to use to empower themselves later. Besides Antidote, we distribute class notes and PowerPoints that we make in advance on Omnivox. Our colleagues have expressed concern that with such practices, students will not come to class, however they do. This year, we also introduced the class forum. We applied an idea shared by Chris Whittaker, which is to send questions before class, and use these questions to start the course.

This is the idea of creating a community of participants, learners, and thus also exchanges. This hasn’t yet happened with all our students. Some will answer questions, but they will not volunteer comments. The ideas are out there, however, and we can hope that one day they’ll be discussed. 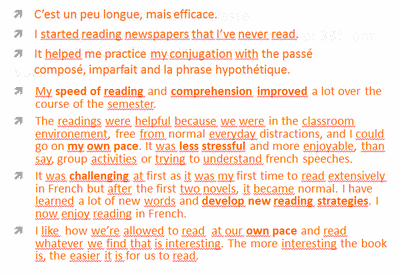 Among other strategies to address difficulties in learning language, we opted for the idea of extensive reading that allows students to read at a level closer to their own. This attracts students because they don't need a dictionary, nor do they need to take the time to consult and ask questions. They progress in reading and therefore develop a kind of satisfaction. We take fifteen minutes at the beginning of each class for reading books borrowed from the library which we have ordered for this purpose in français facile.

Parallel to the extensive reading, we have also done extensive writing. Students have a journal, which is graded twice during the course, where they write two texts weekly. By the end of the course, they have written 24 texts in French. The quality of the French is not graded. They need to tell us something that has a relationship with their French, such as to say that they were in a store, and spoke French, etc. One change that has occurred as a result has been the pleasure that we have gotten from our teaching. There have been three sessions in a row where we have worked to reach out to students, and the student feedback has been sufficiently positive as proof of our success.

In a survey at the end of the semester, the answers to the questions about the satisfaction with the course were, in fact, somewhat qualitative. It cannot yet be measured, but we asked for example Did the Powerpoints that were sent in advance help you? What did you do your extensive reading in? When we see positive answers, we are satisfied, but we are unable to quantify results in terms of more successful grades. Our students are developing something that is a precursor for more successful learning.

Forty-five hours is not going to change everything, however, there have been changes in attitude towards French and an awareness of tools and strategies that students can continue to use by themselves. There is improvement, but that does not mean that the student who had a grade of 40-50% will end up with 80%. Given the strategies that we used, if our students repeat the course, they will start with a different approach and with some confidence. French will no longer be a great mystery but something they have begun to understand. They will be ready to review, redo and succeed, and they usually will succeed the second time.

Changing attitudes changes everything! How could Universal Design for Learning become a part of your teaching?