Several years ago I attended a talk on complex systems where the proposition was made that we were entering a new stage in science - the Computational Stage, in which the prevalent methodology was the use of simulations and models rather than traditional experimentation. Kaput, Bar-Yam, Jacobson, Jakobsson, Lemke, and Wilensky (2001) argue that science education should include exposure to complex systems thinking and not only to, what Resnick and Wilensky (1993) call, the traditional Deterministic Centralized Mindset. 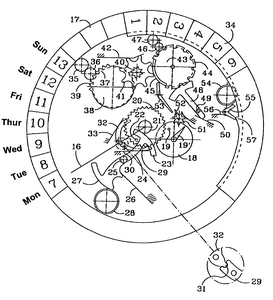 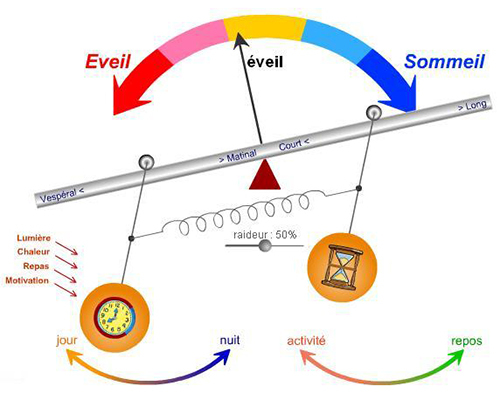 The Swiss watch is a highly predictable, linear system (although complicated) and thus a simple system. The double pendulum is a complex system behaving in highly chaotic and nonlinear ways.

There is abundant evidence that students have major difficulties understanding phenomena exhibiting the characteristics of complex systems - phenomena such as evolution, population dynamics and gas laws. However, features of complex systems, such strange attractors, self-organization, scale-free networks, deterministic chaos, etc. can and are appreciated by even young children when they "play" with probabilistic models such as those provided by NetLogo and Star Logo.

As part of a research funded by PAREA, I began using NetLogo simulations with students in my General Biology classes. My objective was to encourage them to see that many biological phenomena were best understood as complex systems rather than as simple systems - that consistent patterns emerged at one level as a result of random events at a lower level.

Net Logo is a programmable modeling environment authored by Uri Wilensky from the Center for Connected Learning and Computer Based Modeling. Netlogo can be obtained free of charge from ccl.northwestern.edu/netlogo/ It provides a stimulating environment where students (and teachers) can explore the characteristics of complex systems. That is, they can explore the influence of random micro-level behaviours (gas molecules, termites, birds) on macro-level patterns (volume, colony, flock). Students can also easily change the parameters of the provided models and build their own models.

Of the many models that I have used, one of my favourites is Daisyworld. Daisyworld is a micro-world with white daisies (with a high albedo, thus cooling global temperatures) and black daisies (with a low albedo, thus raising global temperatures). In turn, the daisies respond to environmental conditions by increasing or decreasing in population size (boom or bust). Students can run the model, and try to predict the reciprocal influences of climate change, solar output, reflection of solar energy, population size and distribution of white and black daisies, etc. To see a student activity, click here. 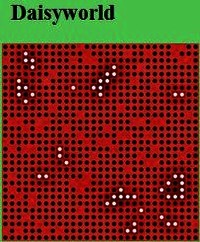 Students, quickly observe that the cycles of low and high population densities of black daisies are associated with changes in global temperatures and, given enough time, these cycles "damp out". They become intrigued by the observation that if they begin with an equal number of white and black daisies (20% each), the white daisies die off (sooner or later) and the black daisies regulate global temperature. However, if the environment is covered with the same amount of daisies, but they are all white, all the daisies die off and the system cannot regulate global temperature. On the other hand, if all the daisies are black, the population reaches equilibrium and global temperature is regulated. They become animated and begin experimenting with increasing the heat trapped by the earth (simulating the greenhouse effect) and discussing such concepts as entropy, causes of glaciation, effect of urbanization, etc.

A Probabilistic Model for Daisyworld on NetLogo

However, the greatest effect of using these models in class is that students begin to appreciate that there are different ways of exploring scientific phenomena. They begin to understand how to model such phenomena as climate, disease transmission, and evolution. They begin to become more comfortable with explanations that are expressed in probabilistic rather than deterministic terms. They become more flexible thinkers.

For some references on either Complex Systems in Education or using NetLogo models link here to see the attached file.

Use the Reader Response Feature below to discuss the concept of complex versus simple systems and the potential of using NetLogo in your courses.