Building Great Communities of Practice Together

As my first semester in our new active learning room draws to a close, I look back and realize that the community of practice for active learning has influenced my teaching more than I would have expected. As an early adopter of this technology, I thought I didn’t have a whole lot to learn from other people, but there’s an ingenuity and a creative thrust that comes just by exchanging ideas. 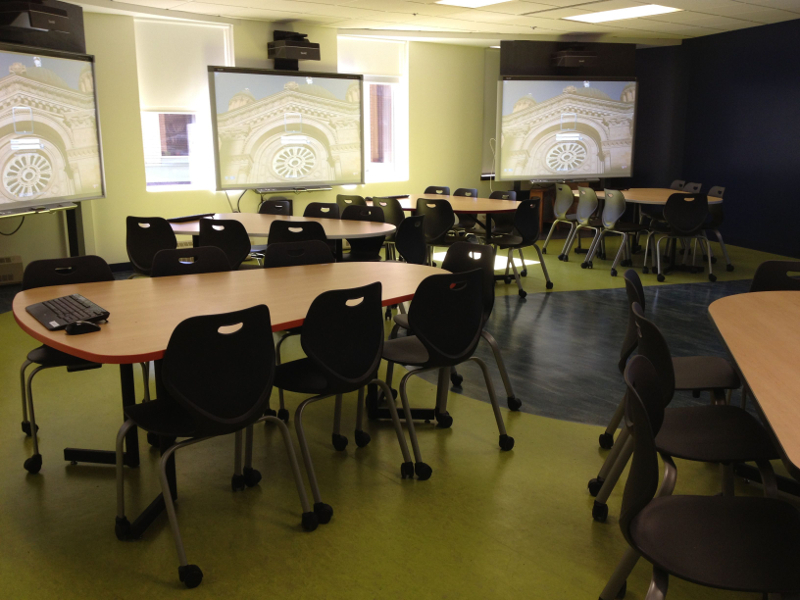 An example of this energy is what you could think of as distributed cognition. In active learning, you’re always trying to hit the sweet spot where students are doing meaningful engaged work that really leads to understanding. You can waste a lot of time in an active learning classroom as well as a traditional one.

One strategy we use when there may be three or four or five categories of problems to solve at about ten minutes each is to arrange different problems at different SmartBoards for different teams. The problems resemble one another but are different in that although the Physics is the same, the surface features are different. What happens is that the groups initially solve their own problems. That takes ten minutes; that’s normal. But then, what I do is stop them and say, “Okay, switch tables.” I give them three minutes to assess and evaluate what each of the other groups has done. So in 16 minutes I’ve gotten my students to look at three problems that would have taken thirty minutes to solve. Not only have they done the problems, but they’ve gone to a different level in terms of Bloom’s Taxonomy. They’re not only doing the problem, but they’re evaluating and assessing.

This strategy was created when I was discussing how I had to get through all of these problems and someone made a suggestion. There are people in Physical Education who are really good about teaching how to form groups. One thing led to another, and then, Liz Charles volunteered some of the theoretical foundations of jigsaw and distributed cognition, and the group started putting it together. What’s nice is you refine something in a way that it is continually pushing the envelope, so that students are continually at that edge where they’re not just redoing a problem but assessing and evaluating, which requires different skills.

With similar hindsight, I realize that communities of practice are really important and an administration that is supportive is hugely important. It’s not just enough to pay for a room. The nice thing at Dawson is that the development of different versions of the room has always been driven by teachers. No one has ever come in and told us what we needed. It’s been us telling the facilities staff and the engineers what we needed them to do because it served a pedagogical purpose. They were very supportive of us in allowing the pedagogy to drive the design and allowing the experts, the people who use this room to drive the design.

The Dawson Administration has also been very good at providing support structures and resources, in particular, release time. Dawson has a fellows program, with up to six fellows who get some release time from their teaching load in order to develop active learning resources, contributing more actively or more importantly to the community of practice.

Three audio files from the author, speaking about the Active Learning classrooms:

Last year, when I was teaching in the Smartroom, students worked on paper a lot and then there’d be one person at the SmartBoard. This year, it’s everybody at the SmartBoard all the time. Some of the research questions we examine are what is happening in a room like this. The things that students do go beyond improving their conceptual understanding of physics, they also get better at articulating their understanding and evaluating each other’s understanding. The community of practice has developed an online virtual environment where students answer multiple-choice based conceptual questions. They rationalize their answer, they then read other people’s rationales and then are asked whether they want to change their choice of answer based on the rationales that they’ve read. There’s an interactivity very much like a peer instruction environment. What we’re trying to see in this evaluation is whether students are using language in a different way coming out of a room like this because they’re constantly engaging each other. They’re constantly challenging each other. How do you objectively measure that? We’re working on it - together!

Sometimes, I’m standing in the middle of the room and nobody’s looking at me. At first, I wonder whether I’m doing my job, but if the job is to get students on that sweet spot and to hold them there, and if I’ve done that with an activity that is engaging them and then some orchestration that keeps things fresh, then I’m doing my job!