Breakthroughs with Breakout Room Recording in ESL during the Pandemic

Profweb Editorial team alumnus and retired teacher Norm Spatz was called back to the classroom during the Winter 2020 semester. Like many other teachers, his class was thrown a curveball by the worldwide health emergency. When the semester resumed, Norm retooled for distance delivery by using his course website and started recording breakout room activities to get his English as a Second Language students talking again. I sat down with Norm prior to the Autumn 2020 semester to hear more about his experience.

Answering the call and his calling 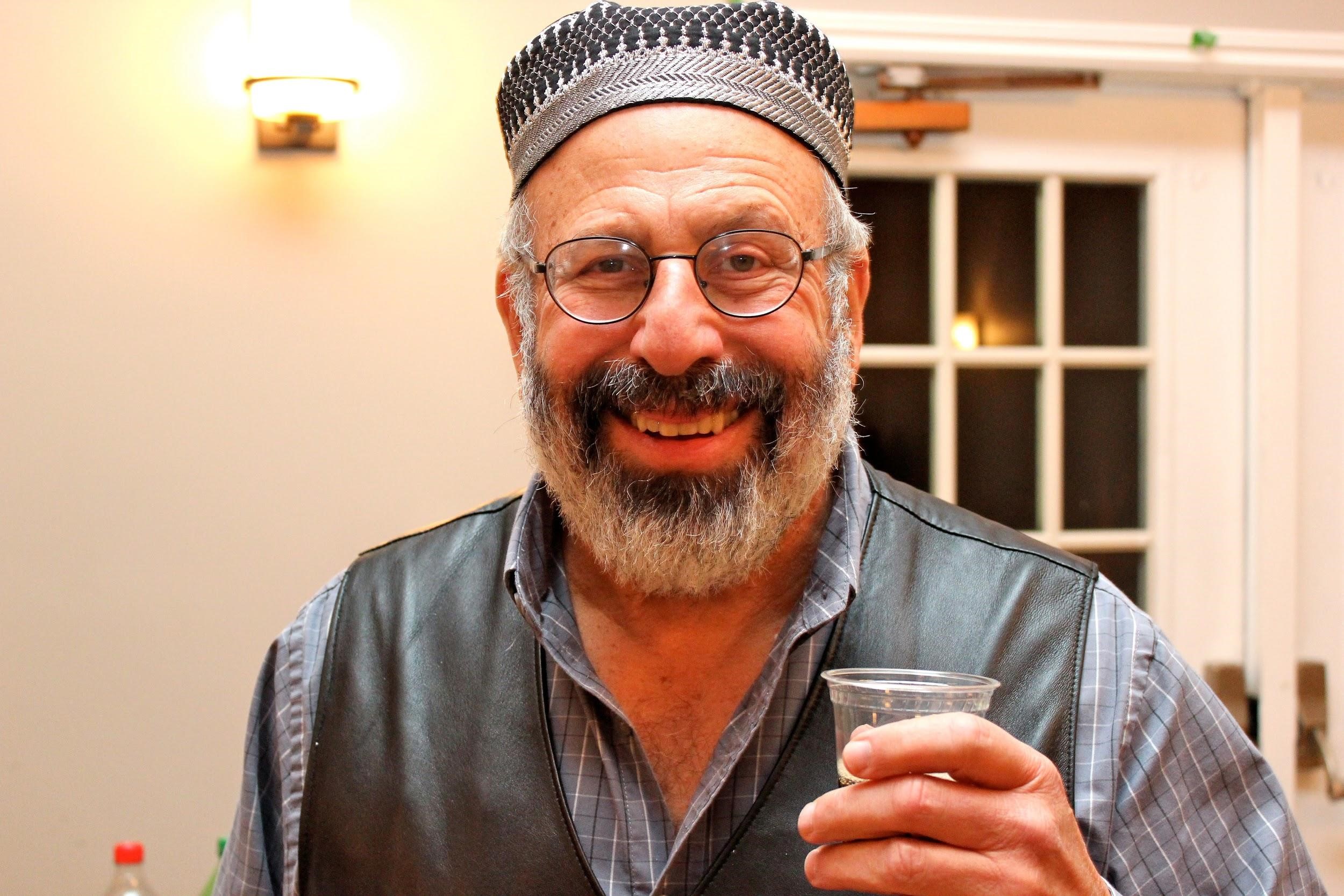 The Cégep du Vieux Montréal sometimes approaches Norm at the last minute since he has already been vetted for the job and has the experience to quickly deploy his classes. He received a call early in 2020 to ask if he would teach a Continuing Education course (604-4T1-VM Anglais propre, niveau 1) in the evening with his team teaching partner, Sarah Aldair, starting on February 1st, 2020.

“It seems that almost every year since I have retired I have taught a course or filled in for a teacher” Norm says. To this day, he still enjoys teaching and feels that it continues to give his life meaning.

Norm’s students included a mix of new Canadians, a number of Quebec residents. Some students were immigrants from Equatorial Guinea, France and Haiti. All of the students were adults with a variable degree of technical skills.

Norm has a knack for using technology however. “I’ve always been extremely interested in using IT in my teaching” he recounts. Norm created his own website on the web server at the Cégep du Vieux Montréal years ago. “I like using my website, because it aggregates everything for the students in one place instead of fumbling around to find things all over the place. I make sure to include information on what students will be evaluated on, including the weighting. The website also serves as a reminder of what I will be teaching each week, which helps my preparation for class.” 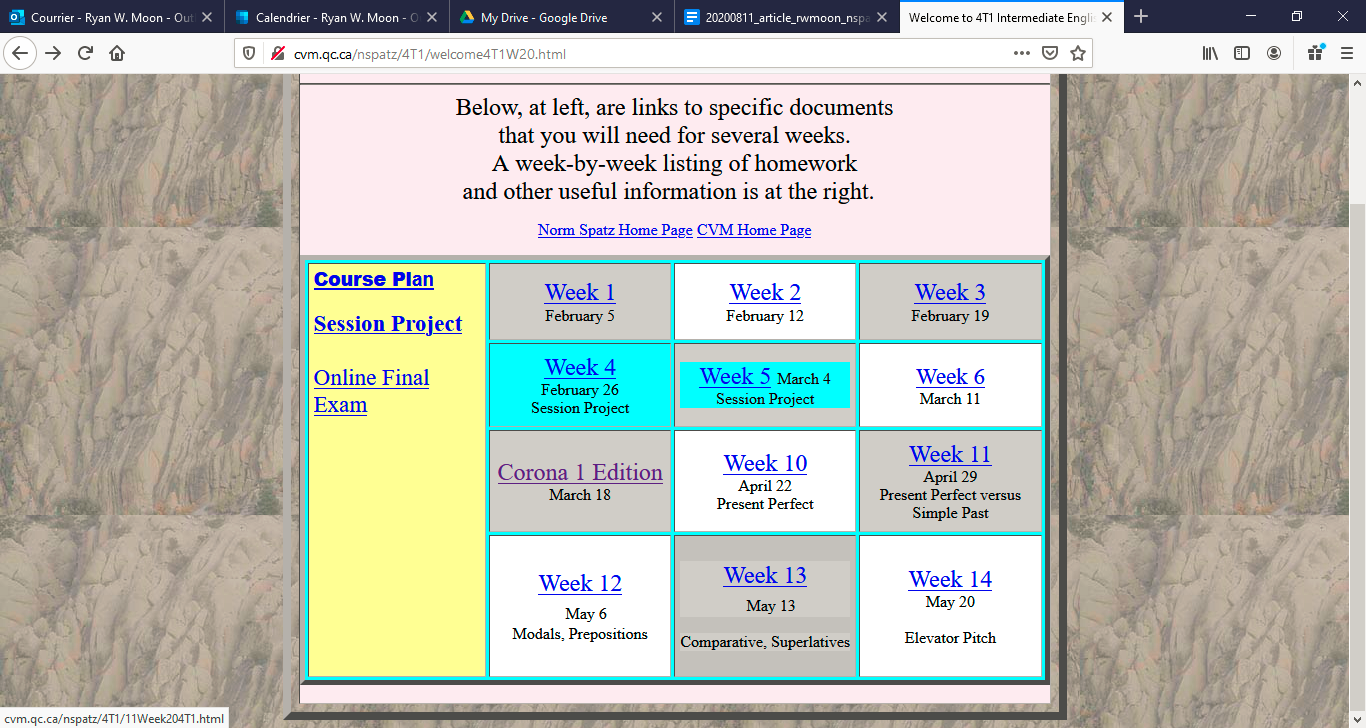 A screen capture of Norm’s 604-4T1-VM Anglais propre, niveau 1 course website showing the “Corona 1 edition” for the week of March 18.

Prior to the WHO’s announcement of a global pandemic in March of 2020, Norm’s key challenge with his students was to keep them talking in English and to remind them to avoid falling back on speaking French, with which they had more experience and comfort speaking. He was already using PDFs of PowerPoint presentations and providing instructions for assignments on his website in early March of 2020 when everything suddenly changed.

With the announcement of the global pandemic, Norm had to quickly pivot his course to continue from a distance. Week 7 of the course was rebranded as “Corona edition” and included a discussion with students as to whether they should suspend the course or continue on-line. The publisher of the textbook Norm used (written by fellow Profweb Editor Andy Van Drom) also offered free access to interactive grammar exercises on the textbook’s companion website for students, which Norm found to be very convenient and helpful.

He began using the Zoom communication platform as the tool for distance delivery of his classes. By his own account, the first week was a bit rough. “The first class was a disaster due to technical problems with the Internet connection that I had at home. Thankfully Daniel Boulerice, our Department Coordinator, was also attending the event and kept things rolling.”

A decision came down to temporarily suspend all courses while administrators and staff worked out plans to resume the semester. He states that “the Cégep du Vieux Montréal has a reputation for staying open regardless of the situation, but this time we closed down. I thought we were going to lose the semester. We did shorten the semester a bit, but we got through to the end!”

Having already experimented with the Zoom videoconferencing platform, Norm had become familiar with the breakout room functionality in the application. However, he thought it would be a good idea to record the breakout rooms to more thoroughly enforce the use of English in the course and better evaluate the progress of his students.

I found that technical solutions made it possible for more students to speak at one time in small groups with less distraction. Furthermore, recording within breakout rooms made it much more difficult for people to get away with speaking French in a very non-aggressive manner and gave me eyes everywhere in the virtual space.

Norm approached a technician at the Cégep du Vieux Montréal who came up with a process to record and upload the recorded breakout room meetings using the WeTransfer file transfer service. Some teachers may opt to set up a SharePoint or OneDrive directory for this purpose if they have an Office 365 account. The teacher has to enable the possibility for attendees to record in the Zoom interface. The technician created a PDF for this procedure to help teachers and students to make it happen [in French].

Here is a typical breakout room activity in a nutshell:

“During the breakout room activity, I would wander from room to room to check in on students, and they discovered a way to page me from their breakout rooms, which helped me to direct my attention where it was needed during their discussions.”

Each student was asked to record the breakout room activity to manage the risk of an unsuccessful recording. This, in turn, helped avoid students having to redo their discussion if a technical problem cropped up.

Norm is particularly proud of his students for a debate they had in Week 10 about the rise in the number of racially-motivated incidents against people of Asian heritage during the global health emergency. “With very basic English, my students recognized that these awful incidents were not unlike the racism many of them had faced at some point in their lives. The discussion built a real feeling of solidarity in the group that kept them engaged for the rest of the course.”

As the semester went on Norm found that it was business as usual. “The same thing that happens in a classroom happened online. Students were very engaged with the material and doing the work. I suspect that they got more from this format than being in class, where they didn’t feel obligated to speak. The students worked for the grades they received and the distribution of grades varied according to the effort they put in.”

Norm enjoyed teaching his online class and shared some words of wisdom. “Just because it’s online, it does not mean that your personal interactions are less important. What is really important is the relationships that we build with students, and yes, it is even possible online.”

In terms of parting thoughts, I asked Norm if he had any advice for teachers that will be delivering their courses online this fall:

“We need to break through the screen to get attention and efforts focused on the people who are on the other side of the screen. Remember that we are not just ‘on a screen.’ We are, in fact, in class!”