An Experiment Unique in Its Field

Change is a given in computer science, and necessity is the mother of invention. In Autumn 2008, the idea of offering the SIM Program (Science Informatique et Mathématiques) which is a pre-university Computer Science program was intriguing for several compelling reasons. In its inaugural year in my college, however, the program had less than ten students registered. Program-specific courses consisted of a sequence of three programming courses and a survey course.

Collaboration with another francophone college seemed like the logical road to take.

A partnership with Cégep de Saint-Jérôme enabled the first course to begin and the program to be launched, notwithstanding registration numbers as low as six students in my own college. This first initiative has allowed a total of fifteen students in the two colleges to profit from this innovative approach.

The challenges of transmitting skills to our students at a distance logically necessitated interschool pedagogical cooperation. Several tools were invaluable: 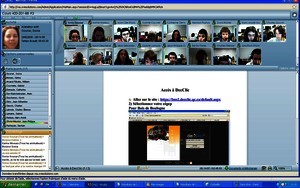 One of the screenshots from the VIA platform.

How would you describe the experience?

Fantastic! I give my course in more or less the same manner as I did before, but I find that the students are more focused on what I'm presenting. I frequently encourage them to participate by asking a question, by expressing their own point of view, by discussing a problem that they are having, by responding to a survey, or by using the application sharing feature to present their own solution or problem, etc. I sometimes get the feeling that I'm team teaching with them. Even during the breaks, they remain on line and use the table which I open to facilitate social exchanges.

Students can take the course from the computer laboratory of their own college or from home and are only required to be present for exams. They can meet with a teacher at either of the colleges, if that seems to be required, and I have office hours at night through the VIA platform. Although it is not mandatory, at the start of a session everyone is present, some in pajamas and others with a cup of coffee at hand. Gradually, those that have understood either help the others or leave the session.

What are the advantages that you have seen?

The competitive spirit that is in the physical classroom evolves into a much more cooperative atmosphere in the virtual environment where each participant receives more visibility. A face-to-face encounter between the students of the two schools indicated that a real team spirit had developed among them even though they had met only in the virtual world. The students seemed to have known each other for quite a while, and no cliques had formed, a phenomenon which is quite common among traditional groups. 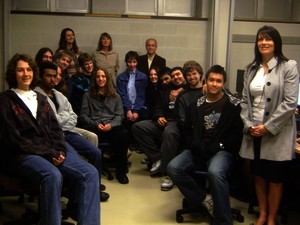 On a pedagogical level, I have realized that the following possibilities exist on-line:

What does the future hold?

Of the fifteen students who enrolled in the program for the Autumn 2008 semester, nine continued on to the second programming course in Winter 2009 (two students failed several courses and four others transfered to the professional Programming program or to the Natural Sciences program). The good news is that there are 42 applications for the program at my college alone for the September 2009 semester. The Cégep de Saint-Jérôme, however, only has 10 applications. I hope that continued cooperation between the two colleges will allow the program to continue being offered in both locations.

Even though I am aware that using the VIA platform is a scheduling challenge for registrars who have to take the schedules of several colleges into account, I have found the experience so enriching that I am ready to offer all of my courses in the same manner. A survey of my students has indicated great student satisfaction with this platform and a desire to use it in the other courses in the program.

Perhaps, other colleges will become involved in this experience bringing students together from around the province. Sharing different experiences, different knowledge and different practices, such a college community would allow the survival of colleges in rural regions. Learning together from the mountains of the Laurentians to the beautiful shores of Lac Saint-Jean and as far away as the quaint village of Kuujjuaq, students could take a course being given in Montreal. Isn't that wonderful!? What possibilities do you envision?

Publications related to
Language of Mathematics and Computer Programming