As a French Second Language teacher at the Cégep de Sept-Îles, I had the opportunity to assist Sharon Coyle who teaches Humanities and Literature, with a Virtual Team Teaching (VTT) project between a class in Sept-Îles and a class at the University of Arizona.

This collaboration resulted in a workshop, entitled Open Mindedness: Five Classroom Activities, that we presented at the 2019 symposium of the AQPC (Association québécoise de pédagogie collégiale) in Rimouski.

In addition to presenting the positive effects of our VTT, we introduced the participants to classroom activities that are easily set up to foster open-mindedness. I would like to share a few of them with you!

Open-mindedness in addition to being the prerogative of a good citizen, is explicitly mentioned in the Aims of College Education established by the MEES (ministère de l’Éducation et de l’Enseignement supérieur) :

In fact, open-mindedness is mentioned several times in the Aims of College Education including in the outcomes for the literature courses as well as the Humanities and French second language courses. Naturally, these few courses should not be the only ones to allow students to broaden their horizons and open up their mind!

Observing ideas, cultures or new practices is not sufficient to develop open-mindedness. This requires actively looking for evidence that runs counter to our belief system and judging this evidence fairly without bias. 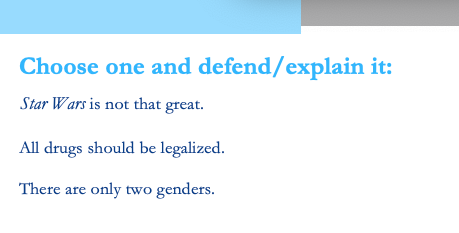 Example of a card for a humanities class.

This very simple activity is probably my favourite because it integrates seamlessly into the teaching of a second language. It is an adaptation by my colleague, Sharon Coyle, of an activity created by Sean Blanda.

Students only have to come up with controversial opinions and write them down. It is very important to understand that they do not necessarily have to agree with the positions. As far as I’m concerned, having each student come up with 3 opinions works quite well. Then the teacher can:

Then in groups of 2 or 3, each student chooses a subject. One more time, it is important to remember that it is not necessary to agree with the chosen subject, it’s even better if the student disagrees. The student must then try to defend this position. The other members of the team do not argue: their role is to listen actively and to ask relevant questions. After a few minutes, students change roles so that everyone can try making an argument.

I use this activity in groups of all levels because the discussions are lively which is not always easy in the context of a second language! During the plenary, the students generally mention how hard it is to defend a position they fundamentally disagree with: that’s when we know that we have worked on their open-mindedness.

Activity 2: The Other Side

Along those same lines, this activity requires no material and, according to me, works well in smaller groups.

The teacher finds a topic, ideally a current, controversial issue and asks students to take a stand for or against …to finally have them defend the opposite position! I then invite students to find 3 to 5 arguments to defend the position that they will present to the rest of the group. 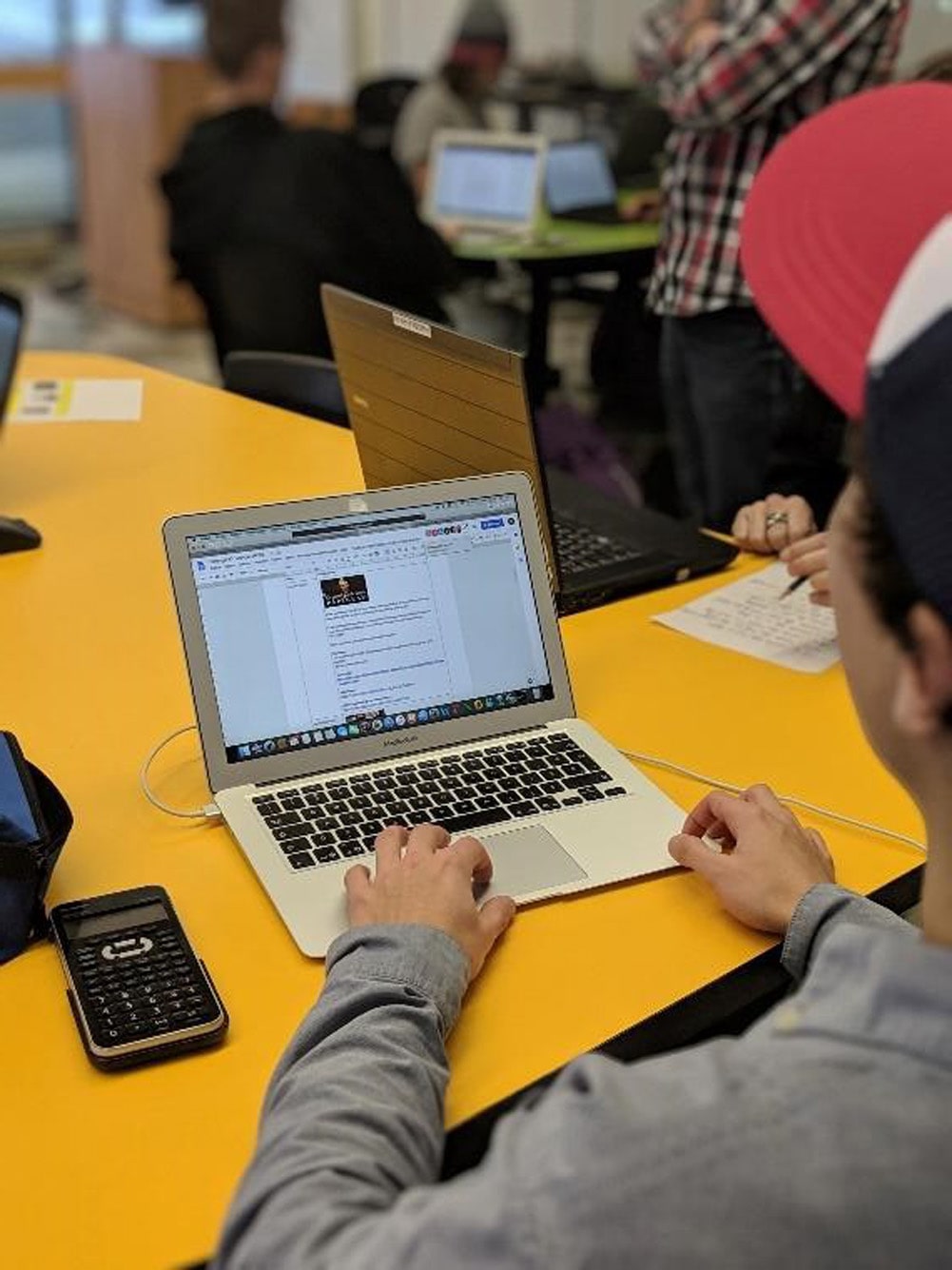 For instance, the students had to find arguments for or against sensitive subjects such as the right to abortion or same sex marriages. This exercise is not easy because these subjects seem to generate student consensus.

In a more advanced group, I try to choose subjects for which students will not all have the same viewpoint: medically assisted death or legalisation of all drugs. It is then possible to have an “inverted debate” in which each student must defend the opposite position. A word of warning, this activity doesn’t last long! The students will surely tell you that it is difficult to imagine what a person with an opinion contrary to their own will think…

The subject of the VTT, carried out in collaboration with the University of Arizona, transcends all borders, be they physical, linguistic, imaginary, etc. 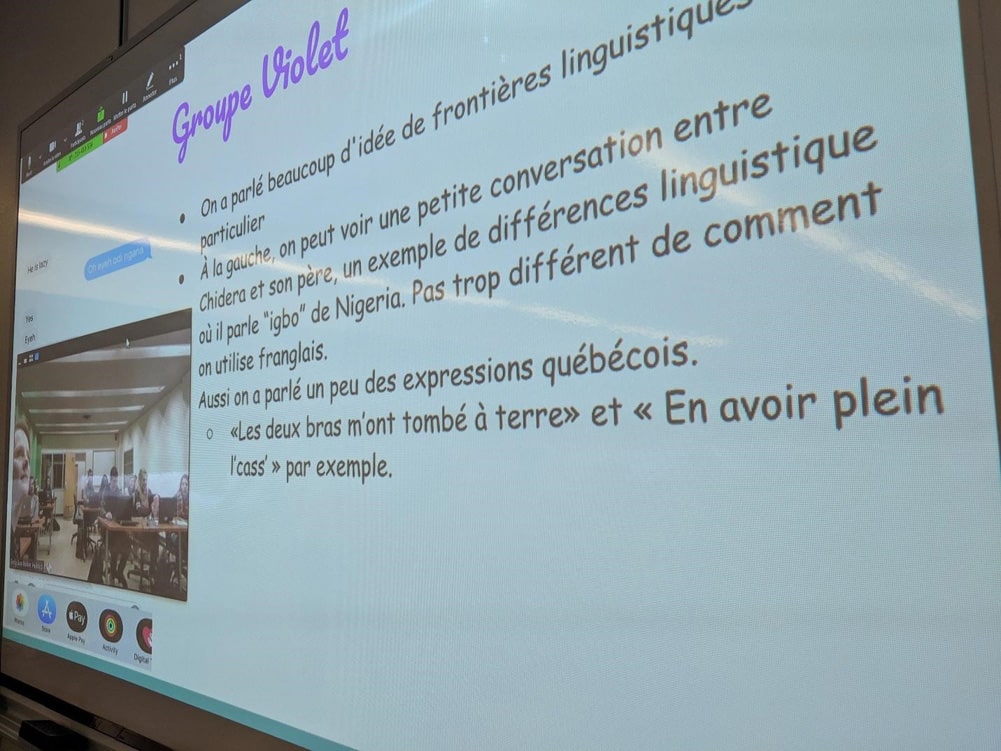 An overview of the exchanges between the students of the Cégep de Sept-Îles and of the University de of Arizona.

I believe that there is no better way to open our minds than to think about what makes us different from others. That is when the virtual exchange becomes interesting. Students can have authentic discussions with people who are experiencing similar situations at the other end of the planet. I will always remember a discussion between English speaking students living in Sept-Îles and a Spanish-speaking student in the United States. Even though they lived thousands of kilometers apart, the issue of linguistic minority was frankly similar. 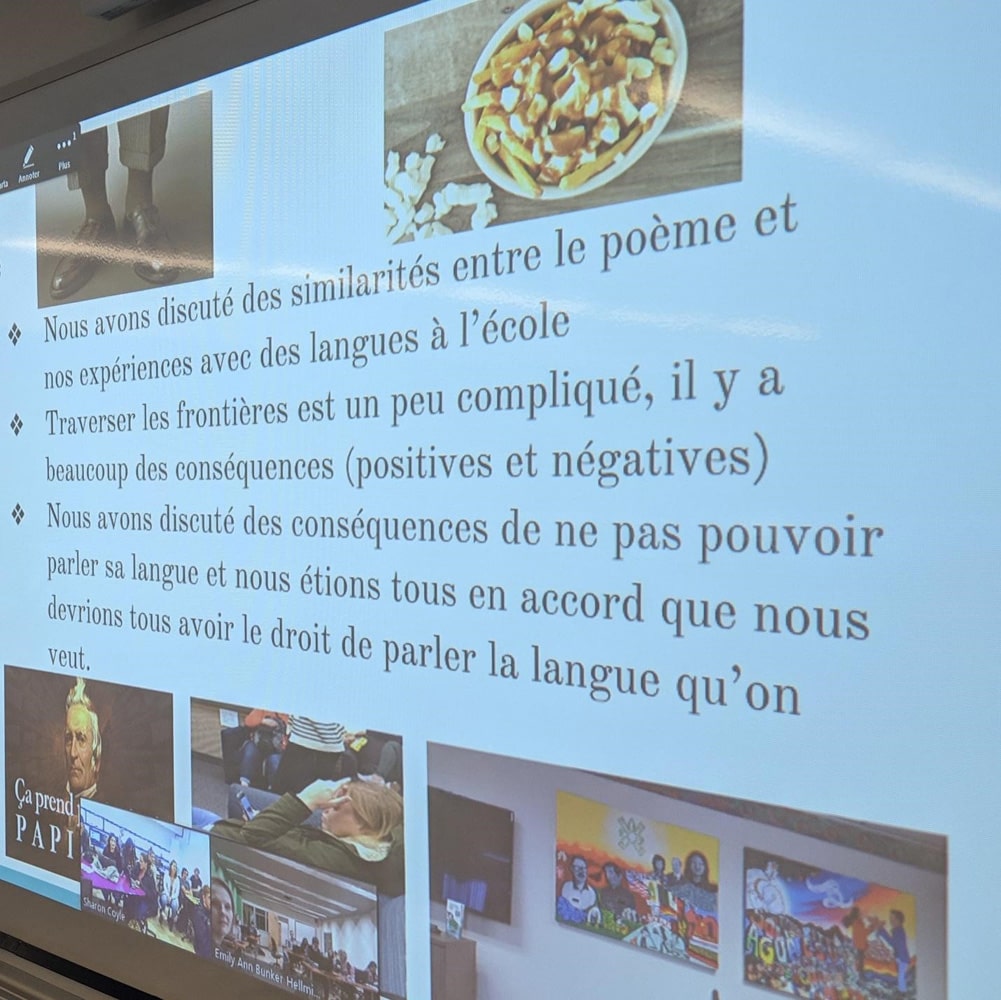 Student reflections during a virtual exchange on linguistic borders.

I hope these few activities will help you find ways to foster your students’ open-mindedness. Perhaps you already use activities that encourage open-mindedness, if so do not hesitate to share them in the comment section!

Marc-Antoine Charette He holds a bachelor of literature, a specialized graduate diploma (DESS) and a masters in college teaching. He is completing post-graduate studies in education and will be starting a PhD in the same field at the Université de Sherbrooke. After having taught literature and French second language at the Cégep de Sept-Îles, he obtained a position teaching French second language at the Gaspé campus of the Cégep de la Gaspésie et des Îles.