I’m not that great at building things, which, I guess, is why I ended up being a physicist and not an engineer. As previously reported on Profweb, I have been running accelerometer experiments with smartphones to help my students learn physics concepts through digital-era equivalents of “real world” examples. With the help of students, we developed 3D-printed equipment to make these experiments more accessible to our growing network of teachers outside of our college.

The 2 Experiments in a Nutshell

In both 2016-2017 and 2017-2018 my colleagues and I were pleased to receive the financial support of the ECQ (Entente Canada-Québec) to develop labs that exploit accelerometers found in smartphones. Accelerometers are tiny sensors providing motion information for digital devices ranging from fitness bracelets to smartphones.

The first lab is a digital-era replacement for the classical topic of the inclined plane. Students analyse the components of gravity at the phone’s “critical angle”, a term we made up to refer to the angle at which the phone’s display transitions from landscape to portrait mode. To support this lab, we have developed a 3D-printed apparatus called the TiltTray.

In the second lab, students put their phones in circular motion using a turntable. The accelerometer allows them to directly measure the components of the resulting centripetal acceleration.  We created a second apparatus called the SpinFrame which allows the phones to spin safely in multiple positions. 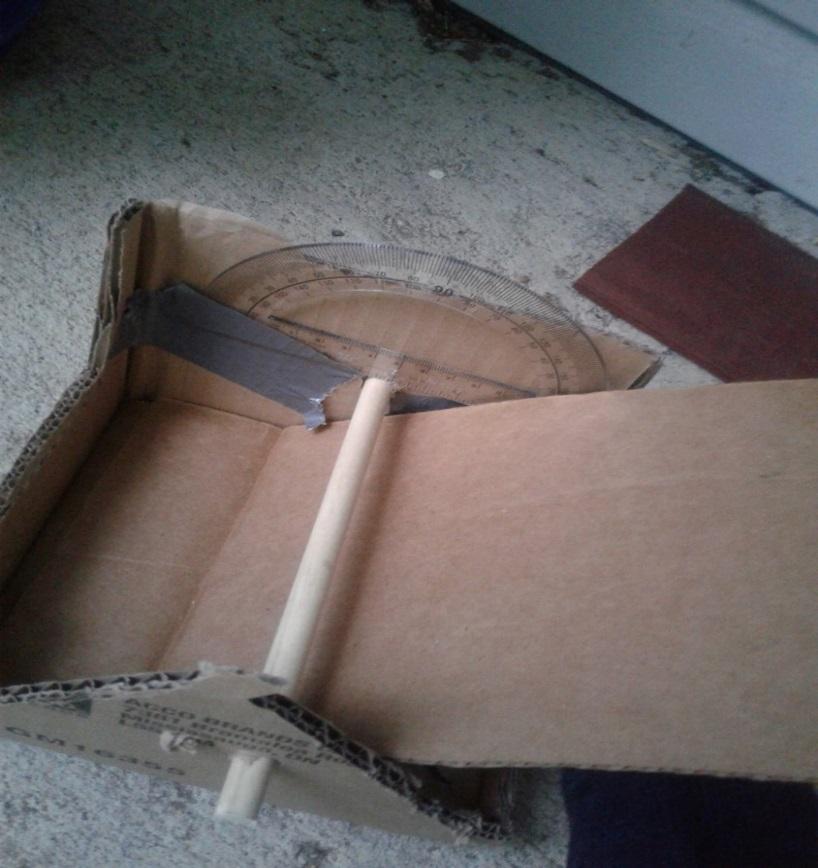 My first prototype for the TiltTray was made of cardboard (Courtesy: Chris Isaac Larnder).

A prototype SpinFrame sitting on a portable record player, designed to exactly fit an 8-1/2 – by 11-inch paper Drop your phone into a corner of the frame, and set it spinning!

From Prototyping to 3D Modeling

I will always remember my initial lab development phase as a time of joyful creativity within a landscape of technological exploration. Joyful until I realized that the new experiments that I was creating for the students would not produce very satisfying results without specialized equipment to support them! I tried to keep my panic in check as I rummaged about our physics department, but what I needed was not simply sitting on a shelf waiting for me. I would have to build the equipment myself.

Like many physicists, I can conceive of all kinds of grandiose mechanical devices, but when it comes to choosing materials and tools, I fall into despair. There is a significant gap between the clarity of my inner vision and the murkiness of the implementation details that must be attended to in actually producing a physical manifestation of it in the real world.

It quickly got worse. Suppose my colleagues actually liked my new lab activities? Unleashing a single piece of equipment on a lab room full of students would certainly lead to no good: I would have to build the darn things many times over. It was in that dark state of contemplation that I first heard angelic voices beckoning me towards the geeky paradise of 3D-print technology.

To build the TiltTray and the SpinFrame, I found a made-for-dummies 3D-design program called Tinkercad, but abandoned it after a 6-week investment, because of  its limitations when keeping it synchronised to a precision engineering specification. I would need some outside help after all!

My next step was to visit the Engineering Technologies department here at John Abbott College. I invited their top students to help me implement my designs in SolidWorks, a well-established engineering solution for 3D modeling.

In return, I offered them a line on their CV that would read “3D design consultant, John Abbott College Physics Department.” It made a win-win for everyone involved! I looked over their shoulders as they worked and asked lots of questions. I eventually learned how to contribute to the design adjustments myself, alongside my student team.

We have since been through many design iterations, and have used different models of 3D-print machines from MakerBot and Lulzbot to test the results. There are many challenges in creating a good design, and there are still more challenges in the actual printing and assembling of the pieces - stories that are beyond the scope of this short article.

The greater power of 3D-print technology lies, I believe, in its mostly-untapped potential as a tool for enhancing community collaboration. Up to now, our project has made efforts to share our new lab activities with other colleges by providing online access to all of the pedagogical documents. Now we can also share key components of the hardware in a similar manner, simply by sharing the appropriate 3D design files! This represents a new paradigm in Internet-based sharing. It lowers the barriers to adoption and experimentation, allowing all educational institutions, including small colleges in remote locations, to have equal access to cutting-edge equipment.

Maggie Livingstone, for example, has introduced our lab activities to her physics department at Marianopolis and adapted the material to their particular department style. She ran pilot projects during the Fall semester of 2018 and now the entire department is embarking on a trial adoption during this current semester. Andrew Stuart is beginning a similar process at Dawson College.

Meanwhile, here at John Abbott, Etienne Portelance is evaluating new accelerometer labs involving Bluetooth technology and topics such as simple harmonic motion. We also have Evgeni Kiriy on our team, providing technical consultancy from our Engineering Technologies department, source of our 3D-modeling students ( F. Prévost, J. Fullum, N. Proulx and D. Boutet) and home to a farm of 3D printers maintained through the top-notch expertise of their lab technician Nick Sanza.

The twin challenges of innovation in the educational sector are accessibility and longevity. If a new approach requires too many resources to implement or acquire it is effectively inaccessible, and will not be adopted very widely. At the same time, if it cannot evolve along with its community of users, then it will eventually die out, in the survival-of-the-fittest sense. The educational innovation at stake here is, of course, our set of smartphone-based physics experiments, and we believe the most promising response to the twin challenges to be 3D-print technology. The ECQ has recognized the importance of these challenges through their support of both the innovation itself (academic years 2016-17 and 2017-18) and its safeguarding mechanism (starting in academic year 2018-19).

We believe that 3D printing technology can be empowering for both teachers and students, who can have the control to create objects that best contribute to their learning. We plan to release the designs for TiltTray and SpinFrame under an open-source licensing model, encouraging others to print their own set of equipment, to modify and improve the designs, and to share their contributions under the same model. We hope this leads to a healthy culture of collaboration and innovation that we can all benefit from in the future.

You can access both the pedagogical and 3D-print files yourself by subscribing to this mailing list. The material is written and simultaneously updated in both official languages. You are also invited to join Prof. Larnder and Prof. Portelance in their APOP webinar on Wednesday January 30th, 2019.

Chris Isaac Larnder was born and raised in Montreal. For the past 14 years he has taught physics at John Abbott College. Prior to this he developed software for the computer graphics industry and founded ACM SIGGRAPH Montréal, a chapter of the Association for Computing Machinery. He has been exploring the use of accelerometers in physics education for the past 4 years and has shared his work through locally via ProfWeb, SALTISE, APOP, AESTQ and ACFAS; and published internationally in the American Journal of Physics, The Physics Teacher and the bilingual Revue international des technologies en pédagogie universitaire. He is also involved in the local artificial intelligence community, having contributed to the founding of JACOBB, an AI technology-transfer center and co-directing the Education axis of the Observatoire international sur les impacts sociétaux de l’IA et du numérique.