When Parallele is in operation, the tablet camera films whatever is in front of it, yet what it displays on the screen is a mix of reality (what is in front of the camera) and added three-dimensional elements—the augmented reality! 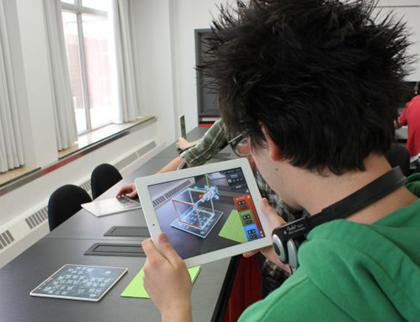 To operate, Parallele uses markers. These markers are maps on which specific symbols have been printed, symbols that the application is able to recognize and use to superimpose three-dimensional elements. The result is updated in real time. Parallele is a serious game that seeks to help players learn physics concepts related to the motion of charged particles in an electromagnetic field. (In the natural sciences, computer sciences, and mathematics, these concepts are connected to the course 203-NYB-05.)

The scenario of the Parallele game begins with the discovery of a Sumerian vault whose interior walls of which are covered with secret inscriptions. The player must discover the symbols in order to open a mysterious door.

To see the inscriptions, students use a particle gun that sweeps the vault interior. This sweep provides an image of the vault contents, acting much like an electronic microscope. The particle trajectory is controlled by applying electrical and magnetic fields to the walls of the vault. Thus, in order to discover the hidden symbols, students have to understand how the fields affect the particle trajectories. They then have to establish which fields to apply so as to direct the particle beam in a given direction.

The game proceeds in two stages:

A countdown starts when the glass cube is used. At the start the counter displays 30 minutes, but time remaining decreases when the students use the transparent cube. Students are advised to use the glass cube for as little time as possible (30 minutes being the maximum). The winning team can be the one with the most minutes remaining on the counter when the door opens.

Presentation of the tool

Particle motion in an electromagnetic field is a phenomenon that is both abstract and three-dimensional. Augmented reality is definitely useful in managing phenomena such as this. Students who played the game enjoyed being able to visualize particle motion from all angles by manipulating the beam at will. In addition, this gave them a group experience of phenomena in action that they could use together to discuss concepts to which the teacher can refer to in class.

Possible uses of Parallele by teachers or students

The application is designed to be used as a game for students. Students can play individually or in teams of two.

The teacher can explain the complete content in class and then use the game as an exam preparation or as an additional exercise. The teacher can also choose to say nothing to the students and ask them to explore the game independently.

So that students can fully exploit the game and succeed in opening the Sumerian door, they should ideally spend two or three laboratory sessions on the activity.

The Parallele application (in transparent vault mode) can also be used by the teacher for demonstrations, whether or not students themselves have played the Parallele game.

Organizational conditions that facilitate or could facilitate integration of Parallele

If students are to play the Parallele game in class or in laboratory, they must have an iPad tablet per team of two (or three) students.

These iPads must be equipped with the Parallele application, which is available as afree download from the Apple App Store.

Each student team must also have three markers that are required for the operation of the application. Markers are available free of charge by contacting Sylvie Daniel, tenured teacher in the Département des sciences géomatiques of Université Laval.

Should the teacher wish to demonstrate the use of the Parallele application, he or she needs a single iPad equipped with Parallele, along with some markers (or, minimally, the first of the three markers). It is very helpful to have an iPad-VGA connector, required for showing iPad screen content using a projector.

For Parallele user support, contact the IT Rep of your college or communicate with Sylvie Daniel, tenured teacher in the Département des sciences géomatiques at l'Université Laval, Parallele development team.

Essential references for the use or integration of Parallele (in French)

Look up the article on Parallele on Profweb but especially read the essay by Mathieu Fortin, teacher at Cégep de Sainte-Foy. Fortin, member of the Parallele development team, discusses his experience using the application in class.

An article on Parallele has also appeared in the newspaper Le Soleil in June 2013.