Home » Publications » Articles » Virtual Reality in the Classroom: What are the Possibilities at College?

Virtual Reality in the Classroom: What are the Possibilities at College?

In recent years, we have observed a growing interest in the college network for the educational potential of virtual reality. In 2014, the Vitrine technologie-éducation presented a virtual laboratory on the topic, before organizing exploratory activities for college IT-reps in 2016 and 2017. However, we had little feedback on the actual use of this technology by teachers.

Therefore, at the 2018 AQPC symposium, we were curious to attend the workshop entitled "Using VR in the Classroom," presented by Johnathan Mina and Pascale Warmoes. These 2 teachers from LaSalle College have experimented with virtual reality in their classes. Their workshop allowed us to experience virtual reality as spectators through cardboard viewers and then as content producers by creating our own 360 environment using our phones.

Originally designed as entertainment products, virtual reality devices, whose variety and affordability today make them increasingly accessible tools, offer new educational possibilities. Inspired by the experience presented by Pascale and Johnathan, we decided to explore the potential uses of virtual reality in the classroom.

Getting Started with Virtual Reality: What You Will Need

Augmented reality consists of superimposing digital content on reality as perceived by the user, in real time [article in French]. It requires the combined use of an application and a mobile device. 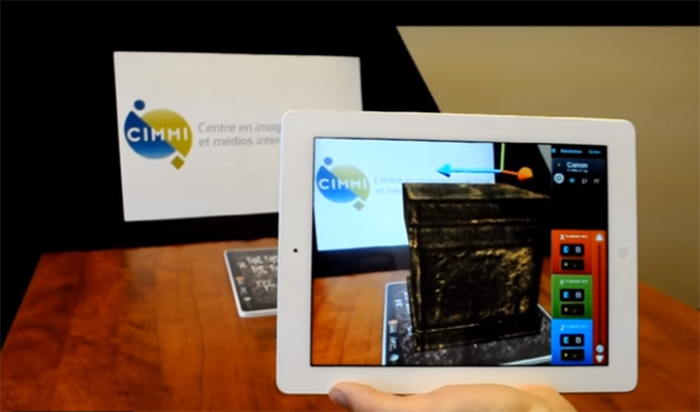 An example of augmented reality with the Parallel application to learn physics. The cube visible on the screen is a digital overlay.

Virtual reality immerses the user in a 360 environment that he perceives as real and with which he can sometimes even interact.

This video explains how virtual reality works. Use your cursor or Google Cardboard to interact with its 360 content. (The video MIT Explains: How Does Virtual Reality Work? (MITK12Videos) is released under a CC BY-NC-SA licence.)

There are several types of viewing devices for virtual reality:

Since the most affordable viewing devices require the use of a smartphone, it is important to ensure that students have one at hand to view virtual reality content.Students can also use their smartphones to produce a 360 environment using applications such as Google Street View, Cardboard Camera or StorySpheres. 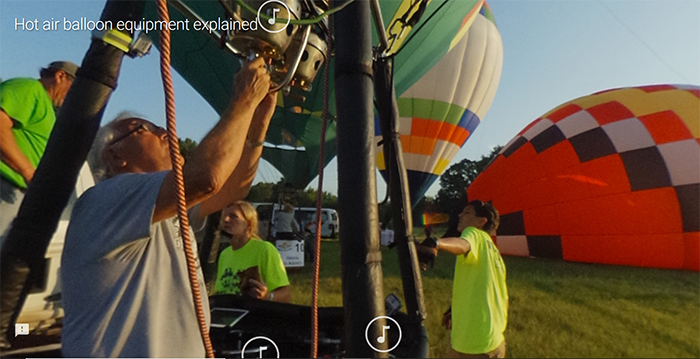 Screenshot of a virtual reality environment including audio on StorySpheres. To activate the narration, the user directs his eyes towards one of the icons (musical note). The added narrative helps identify and explain each of the components of a hot air balloon. Click here to preview it on your computer or mobile device.

Virtual reality environments can be realistic or simulated. We mainly selected examples of realistic content, but several games and simulators also offer educational value.Here are some mobile apps and YouTube channels to view or produce free content for virtual reality.

The Example of Pascale and Johnathan: Virtual Reality to Evoke Empathy

Jonathan and Pascale experimented with virtual reality in the classroom during the 2017-2018 year thanks to a Saltise mini grant. They took advantage of the immersive potential of virtual reality to spark student empathy.Pascale wanted to support her students in Special Care Counselling in their development of interpersonal skills, particularly by raising awareness of the reality of minorities and vulnerable groups. Johnathan wanted to inspire greater student engagement when addressing ethical issues in his Contemporary Ethical and Political Issues course, even when the subject seemed far from the students’ reality.Using the Within application and smartphone viewers, students watched short 360 documentaries showing the daily lives of war refugees. 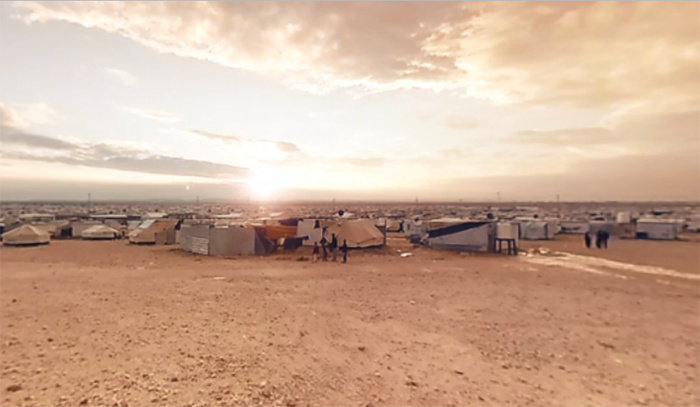 One of the 360 documentaries viewed by students, Clouds over Sidra, presents the daily life of a 12-year-old Syrian refugee in the Zaatari camp in Jordan.

This experience allowed students to get a less theoretical and more experiential understanding of conflict and its impacts on vulnerable populations, providing added value to their learning.

By competency or ability to be developed by the student

Marie-Ève Lapolice, a high school teacher and researcher at UQAM, has produced a directory on virtual reality in education [in French]. At the time of publishing this article, the directory proposed pedagogical uses of virtual reality (adaptable to the college level) for the following disciplines:

Benefits and Disadvantages of Virtual Reality in Teaching

The characteristics of virtual reality that make it an entertaining experience also offer interesting pedagogical possibilities, allowing students to experience an immersive situation that would be difficult to recreate in real life. The offer of accessories and content, which remains to be expanded, is interesting enough to design a learning scenario using virtual reality in a relevant way. Most of the students surveyed in Pascale’s and Johnathan’s classes appreciated their experience, which had a positive impact on their motivation and learning.Do you see other possible pedagogical uses for virtual reality? Do you know of other free resources? Feel free to share them in the comments.

Andréanne Turgeon She has been working as an Editor for Profweb since 2014. She holds a Bachelor's and Master's Degree in History and has worked on the design and supervision of a distance education course within this domain. Her work as an editor and participation in different college network events allows her to continuously update and enrich her technopedagogical knowledge. She enjoys lending her writing talents to teachers to help them share their innovative practices. She is particularly interested in pedagogical approaches and resources that support student success and inclusiveness.

Andy Van Drom Andy Van Drom has been teaching English as a second language and linguistics since 2005, first at Université Laval and since 2012 at Cégep Limoilou. After pursuing doctoral studies in linguistics, he is now working part-time on a master's degree in college pedagogy with Performa. Andy has also published three teaching methods with Pearson ERPI and has developed several open educational resources in electronic format. His strong interest in techno-pedagogical tools and active learning strategies led him to work at Profweb, where he has been an editor since 2017. In 2019, he received the AQPC Honourable Mention and the EF Excellence Award in Language Teaching.