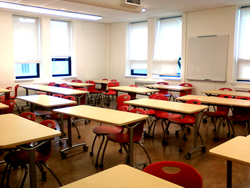 Vanier already has an expensive active learning classroom filled with technology in Room N515. Unfortunately, many teachers have hesitated to teach in this room. A major part of that hesitation was teachers uncomfortable with the amount of technology who felt that they wouldn’t know how to use it and would look stupid in front of their students. There were also a couple of people who said, “The way I’m going to be teaching, I won’t really use that stuff and it’s a waste for me to be in that room when someone else who would use it could be.” 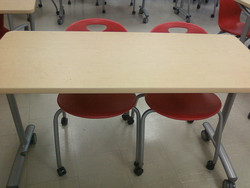 Chairs and Tables on Wheels

So the idea to build rooms that responded to teachers’ needs was the real focus. The most appreciated feature in the active learning classroom was the movable chairs. Students could roll around and go wherever they needed. Tables that were easily movable was also a must. The idea was to encourage people using this room to be able to rearrange it in whatever pattern they needed to do whatever work they were doing. 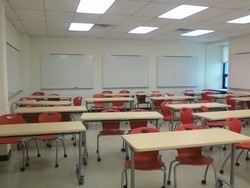 Another goal was to have students able to write individually yet have students in groups be able to record what they’re doing in a way that was visible to others without SmartBoards. The students aren’t always comfortable using them, they cost a fortune and they don’t always work. The solution was to have whiteboards instead, and they’ve been very successful. Both students and teachers have really enjoyed using them, and so, they were installed on as much wall space as possible. A few were custom sized to fit in odd spaces.

The Place of Laptops in the Classroom

Laptops are the last component added into this active learning context. It’s important to offer students access to the Internet, to facilitate using the Internet as a resource, and to offer access to computer programs, which a lot of people who do active learning activities use for simulations and similar features. If not available, the teacher has to book a computer lab, which means that they’d have to move all their students into that lab which is not conducive to active learning. It’s very difficult to see your partner through a computer, so it actually shuts down a lot of communication. 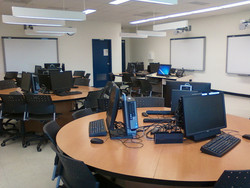 Computers on the Tables in the Active Learning Classroom

Because desktop computers were put on the tables, it was hard for students to see their group members on the other side of the table in Room N515, hindering their ability to communicate and work together. In the Versatile Classrooms laptops were used which not only close, but are stored away when they’re not needed, discouraging things like checking Facebook when you shouldn’t be. The computers come out when they are needed for an activity. 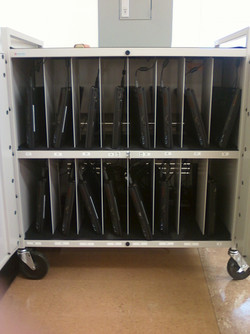 The Storage Unit for the Laptops

To manage the laptops, a storage unit was created where they all can be plugged in. There were concerns that the class at the end of the day would get laptops that weren’t charged, so IT set up a cabinet with plugs in each slot. There are also a few extra power extensions, because the power bars for the computers are strapped in, but if a laptop is dying in the middle of class and the student needs to keep working, they can plug it in if they need to.

The only real issue Vanier seems to have had with the laptops is that their Wi-Fi service isn’t as strong as it should be. It has been difficult to get everyone connected at one time, when there are fifteen laptops all of a sudden trying to connect to one antenna. Increasing Wi-Fi infrastructure to support more rooms like this is on the agenda.

Following a meeting at the end of the semester to talk to the teachers who’ve been teaching in this room, the Academic Council has made the addition of versatile classrooms a strategic priority for new classroom construction at Vanier College.