Home » Publications » Articles » Toward a Future Filled with Promise

Toward a Future Filled with Promise

The CCDMD (The Collegial Centre for Educational Materials Development) is marking its fifteenth year of service. Since its creation in 1993, the CCDMD has issued an impressive number of French language publications. Since 2005, a small English language publications team has been working enthusiastically to create resources for the anglophone sector and to enable the translations of several products, from English or from French, depending on which service originally developed them.

Several recent CCDMD releases are available in French or in English to benefit both communities of the college network. Among these products are the following titles:

The ECO program enables the creation of language exercises for listening and individual word as well as short sentence pronunciation. It was produced by the English division of CCDMD and translated into French.

NetSondage 2.0 enables the creation of web-based surveys and will be translated into English within the next few months to allow distribution throughout the college network.

Chronos 2, an original and dynamic learning resource, will be available free on our Internet site in French as of December and in English this upcoming Spring. 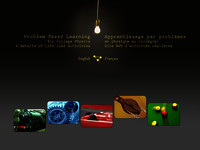 The Internet site Problem-Based Learning for College Physics was developed by the English sector and released simultaneously in both languages.

A new version of Hands-on Science will be available in English and in French before Christmas.

At last, Le monde en images will be available in English and in French for the beginning of classes in January 2009.

We now also regularly translate all our software utilities like Cantare, NetquizPro,Interpreter and Crisscross Words. If demand is sufficient and the translation does not require a major rearrangement, CCDMD products will be issued in both languages as a matter of course.

It is not surprising that during the last two years CCDMD has published an unusually large number of products. This is a direct result of our efforts to enlarge our client base by serving both the anglophone and francophone sectors of the college network.