Remarks gathered by Paul Landry, Teacher at the Polyvalente W.-A.-Losier and Intern at Profweb during winter 2016.

During the winter 2016 semester, Catherine Hudon and Pierre-Marc Robinson, Teachers at Cégep de Baie-Comeau, were faced with an unusual situation: one of their students, registered in the Sport-Study Program, was traded during the school year... for a team in New Brunswick!

In order to allow the student to complete his college studies, the 2 teachers accepted to modify their courses to offer them both in-person and by distance, with only a few weeks’ notice. The following is a synopsis of this spontaneous teleteaching experience.

Tell me about the context within which you started distance teaching.

Catherine: During the winter 2016 semester, I taught to only one distance student. This student, in the Sport-Study Program, was studying at Cégep de Baie-Comeau because he played for the Drakkar, the local Major Junior Hockey League team. He is now playing with the Moncton Wildcats in New Brunswick, because he was traded at the beginning of the winter 2016.

During the winter semester I taught the course Waves and Modern Physics in the mornings. The student attended my regular class simultaneously through the platform VIA, when his schedule permitted. He was occasionally absent when his team was on the road or when he had a practice at the same time. In addition, we organised a videoconference via Skype at least once a week, according to his availability, to ensure a follow-up and to verify that the notions from the class had been understood and to go over the material missed during his absence.

Pierre-Marc: I was teaching the course Probability and Statistics to this same student, with the same hybrid method as Catherine. However, because my classes were in the afternoon and the hockey practices were often held at the same time, this distance student was often absent (I would say for more than half of the classes). We also organised Skype appointments, but they were more numerous for this reason.

How did you organise your class to insure distance teaching?

Catherine: Our courses were delivered by distance through the platform VIA. The camera for the student was directed at the board and we could move it and redirect it as needed. The student used a laptop computer, which allowed him to follow the course from anywhere, whether it was from his home or a hotel during a tournament. He is a highly disciplined student and his objective was to complete his DEC on time to be able to attend university in September 2016.

What was your experience while making the transition between classroom teaching and distance teaching?

Catherine: Arranging distance teaching for the student occurred quite quickly. Stéphanie Coll, Education Advisor at Cégep de Baie-Comeau, accompanied me while I became familiar with the VIA interface and while I conducted tests with the platform which took about an hour. During the first class, a computer technician was on-hand to ensure that all of the technical elements were functioning well. I experienced some apprehension with respect to the computer system, because we never know when the system might crash. We used a fixed connection, which is more reliable.

Pierre-Marc:  The transition occurred rather easily. I also met with Stéphanie Coll at the beginning of the semester to get familiar with how the VIA platform works. I was rather confident before beginning, as I felt proficient with technology. In spite of this, distance teaching was, all the same, not obvious under the circumstances. I was teaching to one group in-person and I had to constantly remind myself that there was another student in attendance on the computer. I was less prone to interact with him during the classes. I asked him questions from time to time to involve him, despite the distance.

The technological tools used in distance education were completely new to both teachers. Technical support was offered by the school: a technician was always available in case of problems (just as the Education Advisor could provide support to the teachers). Catherine and Pierre-Marc did not have to bring many changes to their teaching practices during the semester, even if their teaching was mostly lectures. They made sure of the student’s understanding during their individual Skype meetings. 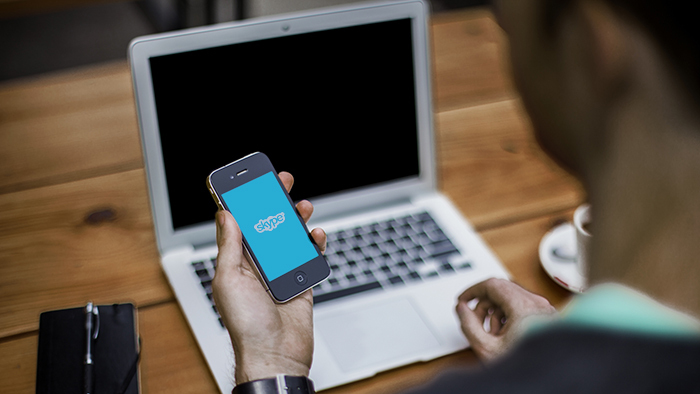 How were practical assignments and exams carried out?

Pierre-Marc:  For assignments and exercises, I sent the instructions by email in a Word file. When he had completed them, he had to scan them (PDF) and return them to me electronically.

Catherine: The assignment deadlines were different from those of the other students. Once the hockey season was over (in the month of May 2016), the student returned to Baie-Comeau to conduct his lab assignments and write the final exam within the school walls. This worked out very well. In spite of the fact that his lab periods were done in an intensive manner and the related material for some of these dated to the beginning of the winter semester, the student was able to demonstrate his achievement of the competency.

What type of feedback did you provide during the semester?

Catherine: Feedback on the assignments was mostly done during our Skype meetings. I also received notifications by Omnivox (MIO) when the student had handed-in his assignments. At the beginning of the semester, I sent him written messages to see if everything was going well. On a few occasions, I used the chat feature of the VIA platform to interact with him during the class.

Pierre-Marc: The greatest interaction took place over Skype, because it was live and face-to-face. It was the easiest way for me to make sure that the student had understood the material and to give further explanations, when necessary. In addition, I often communicated with the student by email.

What were the evaluation methods by distance? What conditions were put into place to prevent plagiarism?

Catherine: For evaluations, an acceptable reason must be provided in the case of an absence. For a student in Sport-Study, a hockey match or practice counts as an acceptable reason. As he had different deadlines, this student could not be paired up with one of his colleagues in class to carry out his assignments. As for labs, they are obligatory and the student had to return to Cégep de Baie-Comeau at the end of the hockey season to complete them at the school. A representative of the Moncton Wildcats team took care of supervising the student’s evaluations. This person then scanned the documents and sent them to me electronically (PDF format).

Pierre-Marc:  In my course, there are 3 exams that are managed by the representative of the Wildcats. This person ensured the prevention of any plagiarism during exams and on assignments. Despite this, it would have been very easy to detect if the student was using the work of another person. I would have noticed very quickly, as the methodology of problem solving would have been the same as another student.

The Pedagogical Connection at a Distance

The teachers were not able to meet the student athlete in-person during the semester. However, they already knew him, as they had taught him in previous courses at the Cégep de Baie-Comeau. Both teachers confirmed that a pedagogical connection was present during the face-to-face discussions with the student by Skype. Weekly supervision and one-on-one support seemed to them, to be the best possible situation to form a bond with him.

Did you find it difficult to form a bond on-line with the student?

Catherine: During the course, it was without a doubt difficult for him to create connections with the other students because his peers were not on VIA. For me, the real connection was developed with the student during the meetings on Skype.

Pierre-Marc:  I found it difficult to develop a connection with the student at a distance while in the classroom setting, because he was the only one behind a screen. When it was a meeting on Skype it was completely different, as it became one-on-one. In class, it is rather impersonal.

Both teachers emphasize that there were not a lot of activities that favoured simultaneous participation by the student when at a distance, as the effort was put more on being in-person in the class (with  lecture-style teaching). Seeing as the decision to offer the course by distance was made at the last minute, the activities could not be modified in such a short length of time. In addition, the student was often absent because of tournaments and practices, which made it difficult for him to participate actively, including with the other students, as the athlete did not have the same schedule.

As for the way of keeping the attention of the student at a distance, the teachers explained that the class was not recorded: the student had no choice but to stay attentive. The Skype appointments allowed them to confirm what had been learned and to clarify certain notions, but it was not a complete repetition of the course.

Pierre-Marc admits that during the classes it is difficult to see what the student is doing and therefore to know if there are any distractions. Sometimes, he directly asked the student questions to make him participate.

The Outcomes of Distance Education

Both teachers perceive the outcomes of the distance education experience offered during the winter semester as positive. The student in Sport-Study has registered at university for September 2016. As the student was determined to complete his DEC, his motivation was tangible. Catherine and Pierre-Marc are of the opinion that for situations like his, distance education makes for an ideal solution.

Curious about the perspective of the student who had this experience? Read his point of view about this model of learning in the next article in our series about distance education.

Paul Landry He is originally from New Brunswick and recently obtained his Master’s Degree in Educational Technology at University de Laval. He has more than 25 years of experience in the field of teaching and is specialized in the field of computers. In addition to teaching computer courses (repairs, programming and productivity and business applications) at the secondary level, he also teaches leadership courses to educate youth about the importance of being a good leader in the world of tomorrow.