The AQPC in Symposium Mode

The AQPC is currently undertaking an intense period of conference organization. The program for the 31st annual conference is going full tilt, and it will take place from June 8 to 10, 2011 in Lévis. Meanwhile, entries are being received for the second edition of the Rencontres Acadie-Québec de pédagogie de l'enseignement supérieur (Acadie-Quebec pedagogical conferences on higher education) that will open on March 7, 2011 in Dieppe, New Brunswick.

The 31st Annual Conference of the AQPC will be marked by a 30th birthday bash. Thirty years ago, on June 4, 1981, seventeen founding members created the AQPC. The resulting network now hosts more than 1100 members. In June, at the AQPC celebrations, the college network's commitment to the organization will be marked by the gift of a souvenir of the meeting to all 30 year old delegates as well as to all attendees marking 30 years of professional life in the college system. 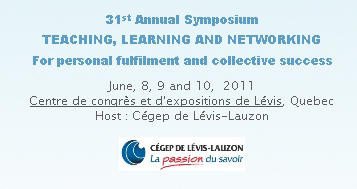 The conference program will be enhanced by the presence of ministre Line Beauchamp of MELS (ministre de l'Éducation, du Loisir et du Sport) at the presentation ceremony for the Ministry's awards of honour on Wednesday, June 8. The annual banquet of the AQPC will be held the following day, Thursday, June 9, and will serve as a venue for the presentation of the Gerald Sigouin Award as well as the honorable mentions. All colleges have already received their invitation to nominate one of their own in this celebration of the contribution of teachers to educational development.

The symposium will focus on the multiple forms of support networks for learning that are in the classroom, in the school, among students or within the surrounding community. Real Jabob, a professor at École des Hautes Etudes Commerciales de Montreal and Scientific Director of the Centre for Francophone computerization of organizations (CEFRIO) will deliver the conference's opening address which is inspired by the CEFRIO report entitled Travailler, apprendre et collaborer en réseau (Working, Learning and Collaborating in Networks).

The AQPC will also host a conference by Dr. Gary Poole, Director of the Center for Teaching and Academic Growth at the University of British Columbia and former president of the Society for the Advancement of Teaching in Higher Education. Other conference speakers include Simon Larose, a professor at Laval University who will present the results of a multi-year research project documenting the effects of secondary education reform on students' academic results. Professor Jocelyne Gacel-Avila, of the University of Guadalajara will address the international dimension of training and the opportunities for colleges undertaking international cooperation.

The program is not yet complete and several conferences and roundtables remain to be added. Although the list of presentations is not final, it is certain that the use of digital networks and social networking will be thoroughly discussed. We even foresee a pre-workshop session presented by the IT Partners of the college system entitled: Social Networks and College Teaching: ICT Partners Have the Answers to your Questions!

The conference program will be released at the end of March 2011. Registration will begin at that time. Anyone interested is invited to visit the AQPC website for additional information, especially regarding accommodation.

Last but definitely not least, a simultaneous translation service will be free for all major conferences from French to English and from English to French. Coupled with the fact that there will be a presentation in English during each timeslot in the symposium schedule, this means that the entire conference can be experienced from beginning to end in English.

While preparing its annual conference, the AQPC has also been engaged in organizing the second edition of the Rencontres Acadie-Québec de pédagogie de l'enseignement supérieur. The symposium will be held from March 7 to 9, 2011 at the Campus of Dieppe Community College in New Brunswick and was organized jointly by the Colleges of Acadia and the AQPC with collaboration from the University of Moncton and the Network of Francophone Colleges of Canada (Réseau des cégeps et collèges francophones du Canada) and the Canadian Intergovernmental Affairs Secretariat of the Quebec Government (Secrétariat aux affaires intergouvernementales canadiennes du Québec).

The program includes more than forty papers dealing with education in college and university, made by people from both Acadian and Quebec institutions particularly colleges. Novelist and playwright Antonine Maillet will launch the event with her lecture "French America at the crossroads of the French past and the future" (l'Amérique française au carrefour du passé et de l'avenir).

Registration is currently underway. The program and online registration are available through the website of the event at: http://www.pedagogie-acadie-quebec.ca/index.html.