The ADTE managed a veritable coup, holding its annual conference on free and open source software known as the Colloque Libre on March 17th, 2016 at Dawson College in Montreal. The event organizers invited internationally-renowned free software advocate Richard Stallman to provide the keynote address for the conference. What follows is an account of the day, which was attended by staff and administrators from all three levels of education in Quebec as well as representatives from the Ministère de l'Éducation et de l'Enseignement supérieur. 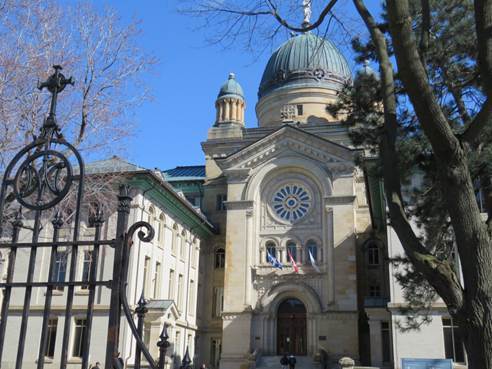 When I arrived at Dawson, the event staff cheerily handed me a badge with a nametag and a delegate package next to the Reception Hall on the 5th floor where the event would be taking place. Some 200 attendees were present for the day, with 78 representatives from the college network, 47 from universities and a handful from the school boards including at least one representative from the RECIT network. The attendees hailed from across the province, including Montréal, Trois-Rivières, Sherbrooke, Québec City, Matane and the Saguenay. There was also an important contingent of industry, para-governmental organizations and independent attendees at the event.

When I arrived at Dawson College, I immediately set up the Free Software Foundation booth that I had been asked to tend first thing in the morning prior to the conference. I was truly pleased with the number of conference participants that stopped by to share their experiences using free software or to relate their personal histories with various GNU/Linux distributions. From this kiosk, I was able to gauge the enthusiasm for free, ‘libre’ and open source software (FOSS) that reigned amongst the conference attendees.

The day formally began when Rafael Scapin, Vice-President of the ADTE (who is also the IT-REP for Dawson College) invited Richard Filion, the Director General of Dawson to the stage. Mr. Filion addressed the attendees with some words of welcome and polled the audience to see if there were any Irish people in the room before wishing us all a Happy Saint Patrick’s Day and extending his hope that our conference would be filled with fruitful exchanges and reflections. 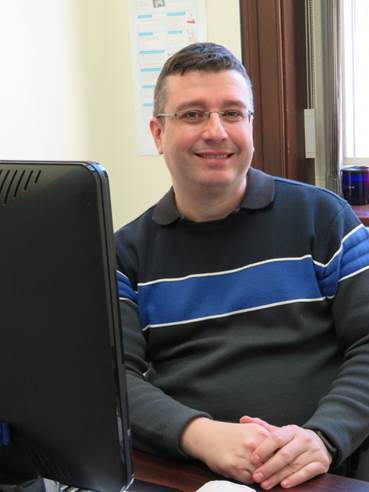 The program began with a panel discussion around the topic of implementing free and open source software in higher education. The morning panel featured a broad range of administrators from both institutions of higher learning and private industry. Each panelist had roughly 5 minutes to present their talk.

From institutions of higher learning:

The following administrators from companies that actively use and promote the use of free and open source software shared their experiences related to working with Higher Ed:

This first round of panel discussion was appreciated by attendees, like Michel Vincent, the Associate Director of Technology and Information Systems at Cégep Edouard-Montpetit:

I really appreciated the morning. In particular, [I enjoyed] the first panel with stakeholders that came to share what they are doing in each of their institutions that allow for use of open source software to spread, whether it be management tools or even tools for the end users. It's interesting to note that this choice is not based primarily on philosophical reasons, but practical concerns. It is crucial that the tool responds to the needs of the users and the organization. It's also important that they are interoperable with other systems. This proves the intrinsic value of open source software... Certain ideas will likely find their way onto our drawing board soon! [Translation]

After the panel discussion, it was time for the main event. Pierre Cohen-Bacrie, the President of the ADTE, took the stage to introduce Richard Stallman, who decided to start developing a free software system called GNU back in 1983 and devoted several years of his life to this goal. Mr. Cohen-Bacrie took a moment to acknowledge the presence of Frédéric Potok, the Director of Governance and Management of Informational Resources for the Networks (Directeur de la gouvernance et de la gestion des ressources informationnelles dans les réseaux) from the Ministère de l'Éducation et de l'Enseignement supérieur. He also acknowledged the presence of Patrice Di Marcantonio, the Director of CELL (Centre d'expertise en logiciel libre) from the Centre de services partagés du Québec.

It was then time for Richard Stallman to provide his talk Le logiciel libre et votre liberté  in French (Free Software and Your Freedom). For close to 2 hours, Stallman kept the audience enthralled with his non technical presentation about the importance of free and 'libre' software, the rights of users and the privacy issues that are inherent in the use of proprietary hardware, software and cloud based solutions provided by various multinational corporations. In the second hour of his presentation, he harkened his alter-ego and donned the ethereal garbs of Saint-IGNUcius for a tongue and cheek presentation about the tenets of the fictional Church of Emacs. Emacs is a free and open  text-editing software that Stallman famously created in the 1980s which has a devoted following. 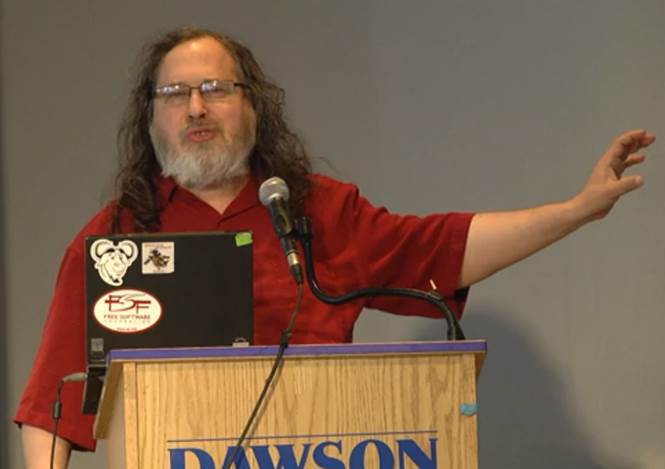 The entire presentation by Richard Stallman was captured by Dawson College's audio-visual service and can be viewed on-line in 6 parts (Part one, two, three, four, five, six). For members of our readership that are not fluent in French, you can also view Richard Stallman's TEDx talk for an abridged version of his talk that covers many of the crucial considerations the audience heard during the Colloque Libre.

With our minds already full with many things to consider, lunchtime arrived and it was now a time to fill our bodies as well with the culinary stylings of Chef Michel's Subito Presto selection of gourmet boxed lunches, which had exotic names like Saint-Tropez and Nouvelle-Orléans. The conference attendees were able to partake in lively ad hoc discussions over lunch and visit the various exhibitors that had set up stands in the lunch room. These included:

After lunch, a second panel discussion allowed participants to digest not only the delightful meal that they had just enjoyed, but also a series of short interventions by members of a variety of Ministerial IT Partners, such as :

This time, the theme was specifically related to the use of free and open source software in Quebec's college network.

One-by-one, each of the partners described the contribution that free and open source software has made to their organization or how they are promoting its use. Whether it be providing a server-based platform for the hosting of blogs (WordPress) or courses (Moodle), using mature productivity solutions that help keep costs in check, or directly contributing to the development of free and open source software, each IT partner had a story to tell. The last panel presentation was delivered by Nicole Perreault, the Community Leader of the IT Representatives' Network. She spoke to how video capsules related to the ICT Profile for Students that were produced by the IT Representatives' Network and Cégep à distance approach the training of software skill competencies in such a way that avoids promoting proprietary software.

The second half of the afternoon was dedicated to a series of workshops that were provided in 2 time blocks. In the first block, Michel Lalonde, a Sociology Teacher from the Cégep du Vieux Montréal presented the statistical software known simply as 'R.' According to Mr. Lalonde, the software is useful for disciplines from Social Science to Biology and rivals commercial packages like SPSS,  Stata and SAS.

Two other presentations were delivered by Professors from the Université de Montréal. Olivier Guillot presented a talk on interacting and sharing with the Moodle Community of developers and users (Moodle is rebranded as StudiUM at his university). Bruno Poellhuber provided a presentation entitled Du logiciel libre aux ressources éducatives libres (From Free and Open Source Software to Open Educational Resources) which looked at how the FOSS community has influenced the open education movement, with different references drawn from scientific articles, educational content and eBooks to demonstrate his point.

After a short break to inhale some coffee and copious amounts of cookies, the second block of presentations began at 3:20 p.m.

Jacques Raynault who holds the Chair of Management Teaching and Learning Technologies at HEC (Chaire des technologies pour l'enseignement et l'apprentissage de la gestion) presented the ePortfolio software Karuta. Mr. Raynault presented the revamped 2.0 version of the software which can integrate with the ELGG social media platform and is also built on an interoperability standard known as IMS LTI (which stands for Learning Tool Interoperability). This standard will become increasingly prevalent over the next few years as awareness of the importance of Learning Analytics grows.

Florent Picard, a teacher from Business Administration at Collège Montmorency presented the free and open source project management tool ProjectLibre. This tool allows you to build Gantt chart timelines that are useful for organizing projects and scheduling tasks. Mr. Picard kindly sent his presentation to the ADTE for attendees to review following the event.

To round out the second block, Alexandre Enkerli a Techno-pedagogical Counsellor from La Vitrine technologie-éducation presented a talk on open learning and FOSS which dovetailed nicely with Bruno Poellhuber's presentation in the earlier block. Mr. Enkerli believes that teaching, by its very nature, is an act of sharing. His thoughtful presentation was a suiting end to a day full of learning, reflection and community.

Congratulations to the ADTE on their organization of this event as well as the members of Dawson's Office of Academic Development and the volunteers who contributed to the success of the day.

Editor's Note: This article was written using the OpenOffice Writer software from the Apache Foundation. The images that appear in the article were edited with the GNU Image Manipulation Project image editing software.