Home » Publications » Articles » Should We Use Web 2.0 Tools with Lower Level ESL Students?

Should We Use Web 2.0 Tools with Lower Level ESL Students?

In this millennial time, it's quite difficult to avoid using ICTs in our ESL classrooms. The question is: for which purposes are you actually using ICTs: administration, facilitating teaching or supporting pedagogical objectives such as deep learning? Many of us are using ICTs without knowing how they specifically affect students’ learning. Going from being a reluctant Moodle user to a pro-active user, I used all sorts of ICTs in the last 12 years of teaching ESL. Students seemed to enjoy activities although they created stress or anxiety for some. Consequently, for my master research project with Performa, I decided to investigate how ICTs, especially Web 2.0 tools, could be a source of motivation for weaker ESL students, such as in 100-level CEGEP courses.

My research was based on the Socio-Educational model of R. C. Gardner (1985) and questions from its Attitude Test Battery were adapted to suit my needs and the technological tools being used. I also selected our Web 2.0 tools according to Chhabrah's list of tools used in ESL.

I designed the course using many ICT tools. As an administrative tool, I had to use the school platform Omnivox, but I used Moodle for class management. I mostly used it to organize weekly content: homework, documents, links and resources. I also used the language lab and students could also access the platform via their cell phones.

Furthermore, students had a Google for Education (G-Suite) account because it has a collaborative approach, sharing mode and facilitates producing online content. It is also easy to add extensions and other apps such as Lucidchart. This online anytime anywhere collaborative mode was quite suitable for the class since we didn't always have access to a computer lab. Students could then use their cell phone, tablets or laptop. Students downloaded apps and online dictionaries on their phones.

The last tool used is the free license of the ESL learning website EnglishCentral, mostly used to improve listening, to acquire vocabulary, to practise speaking and pronunciation, and to improve fluency. For instance, students had to watch a video, complete the script as the video would play back, repeat the sentences and would get immediate feedback. This is an aspect that students really appreciated. It improved their self-perception and self-assurance. 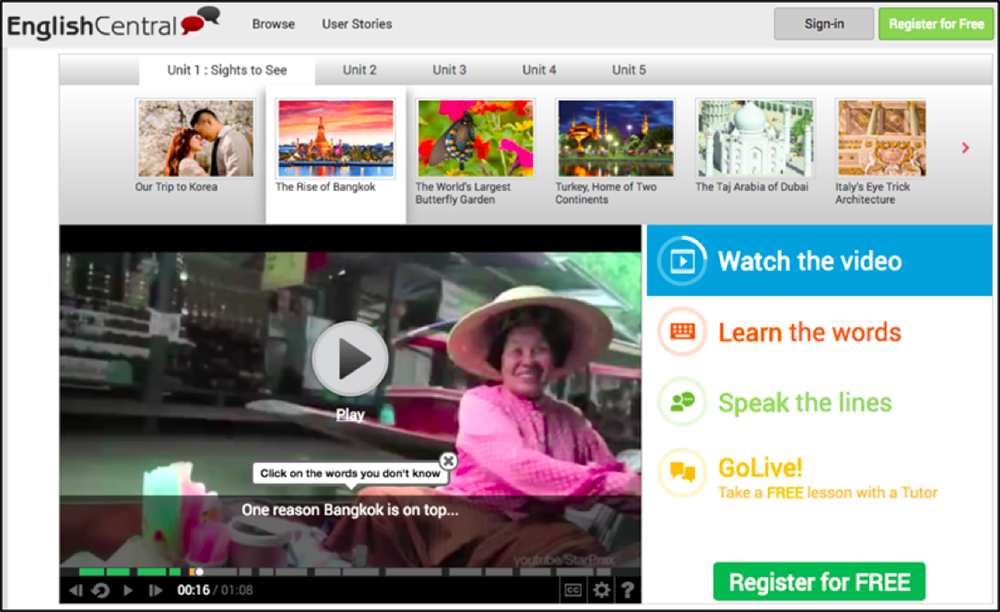 Screenshot of a video-based activity on EnglishCentral

Example of a Learning Sequence Rooted in Technology

Here is an example of how Web 2.0 tools can be integrated to practise different skills, while students worked on the theme of marketing and consumption habits.

Using that many technological tools may seem quite overwhelming and you may think that it creates confusion in students, but, most students mastered them quickly as they were introduced one at a time. Only a few required more support and help when a new tool was used.

The question is; in the end, did these tools motivate students in learning English as a second language? The answer is yes, it did, but to what extent? Referring to Gardner's Socio-educational model, I observed that students’ attitudes toward the English language and its community changed:

Our results also confirmed that although they recognized the importance of the English language in their program and in the workplace, they don't think it's necessary to get a job. Unfortunately, but expected, students postpone their English homework, they don't take the time that it is needed to understand everything, and they don't necessarily value their English class over their other courses.

On a really positive and surprising note:

These results mean that these students were more inclined to take risks in speaking the language, practised more, and therefore, would, more than likely, improve. This research hasn't really changed any of my practices, but it validated the use of Web 2.0 tools to learn English as a second language. Obviously, my research had its limits, but it can confirm to teachers that using Web 2.0 tools has positive effects on ESL students.

What we need to research on now is how each Web 2.0 tool affects students and which tools are the most effective. Furthermore, studies on how Web 2.0 tools could reduce English learning anxiety would be profitable for 100-level students. One thing is sure; we are not done using technologies in our classrooms

Lyly Lessard Cumulating nearly 2 decades of college teaching experience in Philosophy and ESL at Cégep de Matane and Cégep de Rimouski, Lyly Lessard has an unquenchable thirst for learning. She holds degrees from Saint Mary’s University in Halifax and UQAR and has recently completed a Master of Education in College Teaching with Performa at Université de Sherbrooke. Her main interests lie in active and project-based learning approaches as well as cognitive and socioconstructivist frameworks. Motivating her students and supporting them on their road to success is central in Lyly’s teaching and she always seems to be working on at least one pedagogical project, if not more. Finally, Lyly also acts as department co-coordinator and the English help center “Cool-Aid.”

Publications related to
Languages and Literature