Home » Publications » Articles » Robots: Coming Soon to a Classroom Near You

Robots: Coming Soon to a Classroom Near You

During a recent meeting of the IT Representatives Network held in mid-October 2015, I had the opportunity to work with Educators from colleges far, far away! Thanks to an innovative experiment organized by La Vitrine technologie-éducation, these colleagues attended meetings by ‘virtually possessing’ a telepresence robot.

Growing up in the 80’s with Transformers, Gobots and my friend’s Omnibot, it shouldn’t come as a surprise that I jumped at the chance to collaborate with a robot at the REPTICs meeting. The telepresence robot known as V-GO is a product manufactured by the company VGo Communications Inc., whose stated mission is to provide telepresence solutions for healthcare, education and the workplace. The robot includes a camera, microphone and speakers, a small computer monitor, and a sparkling array of lights (to virtually raise your hand), all of which are mounted on a frame with wheels. The robot can roam around wirelessly by connecting to a WiFi network, and be controlled from a distance over the Internet with a regular computer using the robot’s user interface software. 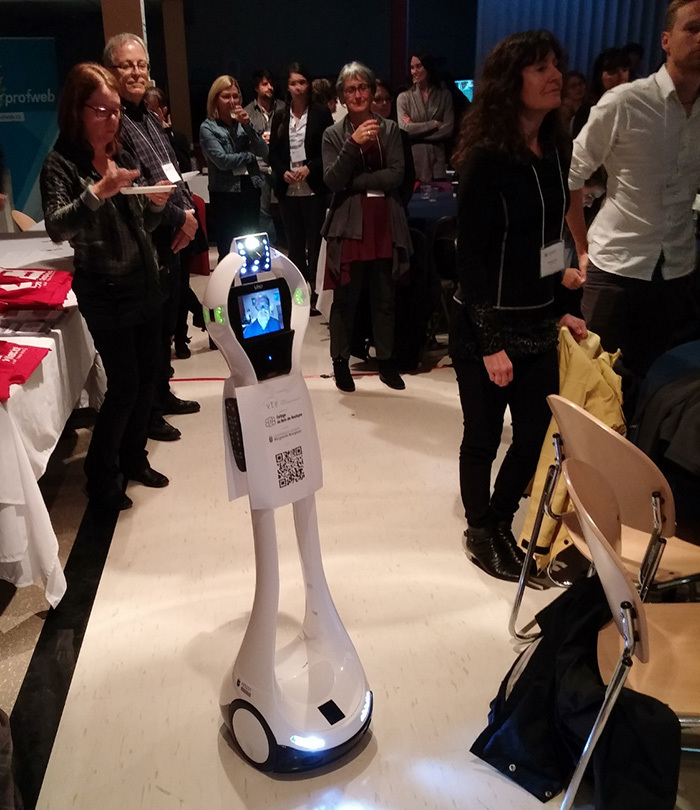 The robot is a potential solution for students with severe health or mobility issues. The ability to continue to attend college allows these students to have a degree of normalcy in their lives despite the daily challenges they are facing. V-GO is currently on loan to La Vitrine technologie-éducation from the Commission Scolaire Marguerite-Bourgeoys. Radio-Canada ran a story earlier in 2015 on the school board’s use of the technology to allow a high school student to attend classes despite the fact that she was recovering from cancer treatments. The technology can be just as useful for other students that are geographically dispersed, and who cannot attend class in-person. The mobility of the robot allows the student to move from classroom to classroom, as long as the robot is within range of a WiFi antenna. 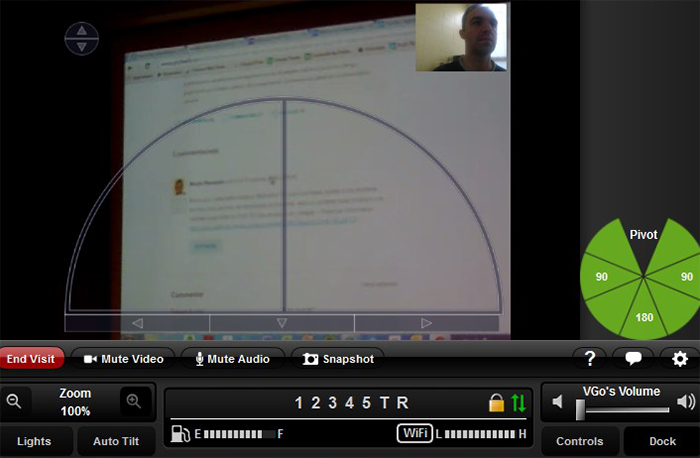 A screen capture of V-GO’s user Interface from the perspective of the remote attendee. (Photo courtesy of Samuel Fournier Saint-Laurent, Cégep Ahuntsic)

Working with the Robot

My first glimpse of the robot was during a visit to the offices of VTE (Vitrine technologie-éducation) at the Cégep Bois-de-Boulogne, where Christophe Reverd from the VTE was performing preliminary tests with V-GO in anticipation of the upcoming REPTICs meeting. The VTE is actively promoting the use of robots in education, as described in an article on Profweb from June 2015.

A couple of weeks later, V-GO and I crossed paths again in Cégep de Sainte-Foy, at the REPTICs meeting, during a workshop entitled Riding the Wave of Open Education that was moderated by Alexandre Enkerli (also from the VTE). Alex split his workshop attendees into groups, and I was paired with the telepresence robot, which was skilfully controlled by Lee Anne Johnston, Cégep Heritage College’s IT-REP.

After troubleshooting an issue with the robot’s audio (I wasn’t hearing Lee Anne), we searched the Internet for some Creative Commons licenced videos while Alex observed how we conducted our search. When Alex asked us to get back together as a class, I moved my chair right next to Lee Anne/V-GO, just as I would have done if she were really in the classroom and we both faced the front of the room - man and robot. I soon learned that I had infringed upon Lee Anne’s circle of safety, as she inadvertently bumped into me with the robot while pivoting to follow Alex’s movement around the room. 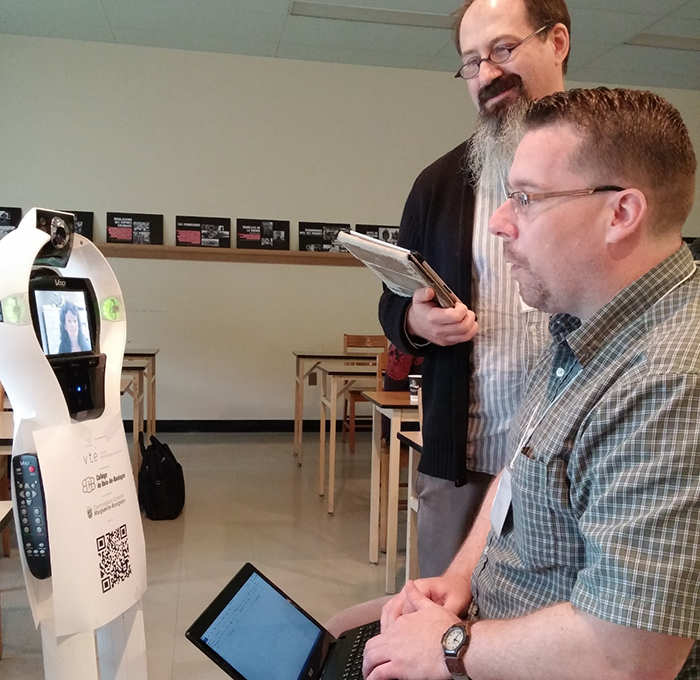 Lee Anne Johnston from Heritage College in robot mode, Alexandre Enkerli from the VTE (top right), and the author (lower right) collaborating during a workshop. (Photo courtesy of Christophe Reverd from the VTE)

I was curious to hear Lee Anne’s reaction to the experience of working through V-GO:

Honestly, it was like being there in person! Once I became accustomed to moving myself around, I felt comfortable being there. I could hear and see quite well; being able to be physically present in a small group was great! There was no time lag so conversation flowed naturally. This aspect, although seemingly small, is critical… [Testing the robot beforehand] I knew exactly what to expect during the REPTICs meeting. I learned that if I wandered out of WiFi range, I had to be rescued!

Lee Anne feels that a teacher should try to treat the robot just like a student that is attending in-person, to make sure that it is integrated into the classroom activities. The robot should be positioned to see any visuals the teacher is using and be able to hear everyone in the classroom. She also recommends that the teacher perform some tests prior to the start of the class.

Playing with the Robot

At the end of the day, we were finally able to spend some down time with V-GO, who was now incarnated by Yves Munn, an Education Advisor from Cégep à distance. Yves virtually attended the cocktail reception for the launch of the ICT Profile Webspace. I reached out to Yves to ask him to comment on his experience with V-GO, in a more social application of the technology.

Yves mentioned that he never really saw himself during the reception, which made for a sort of out-of-body experience. He compared it to the film Being John Malkovich in that he had the impression he was possessing someone else’s body with the aid of a mouse and a few keyboard strokes. 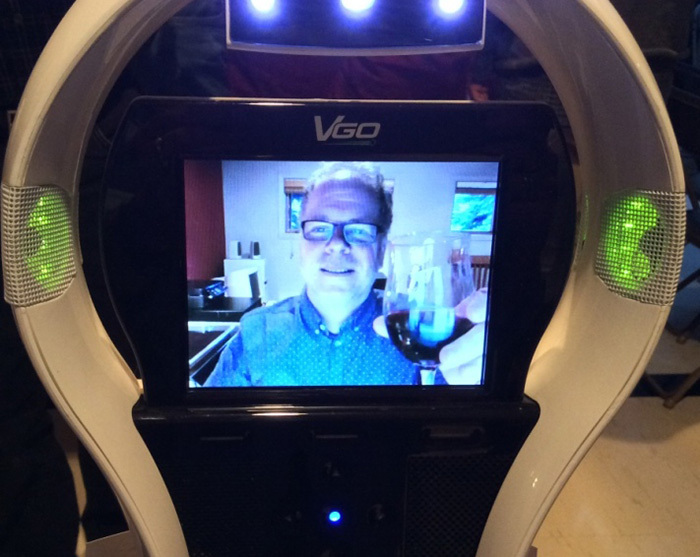 In terms of mobility, Yves mentioned that he had 5 speeds to choose from, including a “turbo” setting! Virtually turning his head was a bit more of a chore, but he was able to look up or down left or right to help put people in his field of vision with his “bionic eyes,” that could zoom in on objects and take pictures. Yves swears that he didn’t take any compromising photos during the cocktail though!

Yves experienced a bit more difficulty than Lee Anne with maintaining a connection to the WiFi network at the Cégep de Sainte-Foy. Since Yves was simultaneously connected to Google Hangouts as part of the experiment, he didn’t skip a beat during his meetings.

Given that telepresence robots are new, Yves felt that the "humanoids” at the reception treated him a bit more like a curiousity than a true participant. They asked many technical questions about the quality of the audio and video, the speed of movement and how he managed to overcome physical obstacles, which could be as simple as an electrical cord. Yves relied on the kind assistance of those in attendance to help him get unstuck. He also confesses that he almost had to collide into people before he was able to move around liberally at the reception, but used this as an icebreaker tactic to start a conversation with the ICT Education Advisors in attendance.

Despite a few hiccups, Yves enjoyed the experience, and also feels that it is much less impersonal than using virtual classroom software. He could wander around, observe, interact on a personal and individual basis or join a group discussion.

According to Lee Anne Johnston, there is one advantage to attending as a robot over other blended learning technologies: the physical robot presence reminds the teacher that someone is at a distance. When a student is in a virtual classroom, using Via or BigBlueButton, they are often only seen when speaking or “raising their hand,” and teachers that are unaccustomed to a blended environment can easily forget about the virtual student.

Yves Munn thinks that the telepresence robot will eventually be treated as one of the gang:

I suppose that in the classroom, over the long term, [students] will no longer see the robot, but one of their classmates, especially if they make the robot wear school colours! [TRANSLATION]

Will telepresence robots harken a new era of accessibility for education in Quebec? We’d love to hear your thoughts in the comments area below!