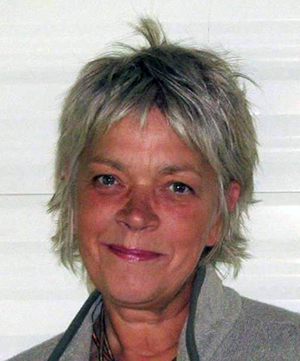 As part of the “Inspiring Portrait” series, the Profweb team would like to introduce you to Nicole Perreault - a passionate community leader!

Profweb works closely with the REPTIC network (Réseau des répondantes et répondants TIC) which gathers, moderates and supports the Education Advisors who are responsible for the integration of technology in teaching within the CEGEPs and private colleges in Quebec. These activities occur in association with the ministerial ICT partners of the college network. Each of the members of the Profweb team has either met Nicole at an event organized by the REPTIC network or worked alongside her as part of a committee advancing a dossier related to the integration of ICTs. We were unanimously in favour of the idea of presenting Nicole to the readership, as she’s an extraordinary colleague!

Nicole studied psychology and focused on animal behaviour for her Master’s degree. Why did she go into experimental psychology? While studying a course on the psychology of learning, her teacher highlighted behavioural similarities between humans and other species of animals. Fascinating!

Nicole began her career as a psychology teacher at the college level (in 1986, then from 1990 to 1993) at Jean-de-Brébeuf and then André-Grasset. This experience helped her to learn about the challenges of the people “in the field” otherwise known as the teachers who come into contact with students on a daily basis. We were curious, so we asked Nicole what kind of teacher she was. Her answer? “I was pretty much the same as what you see today in my role as a community leader.” Our answer? Impassioned by pedagogy and by students!

It was around this time that she adapted the English version of an Introduction to Psychology text (Rathus) with 3 colleagues. The work would garner her an honorable mention at the Prix du Ministre ceremony in 1994.

Her motivation as a teacher was driven by the motivation of her students. And what does Nicole think about the little pleasures in life? The answer to this question merits revisiting a crispy little anecdote:

The Introduction to Psychology course included a section dedicated to paranormal abilities. Colluding with a teacher dressed in a laboratory outfit, Nicole told her students that she had the ability to guess all of the telephone numbers in the Montreal phone book. Imagine a cart where the phone book was placed, and the fascinated glares of her students as she channeled the correct answers… and then their utter disappointment when Nicole explained the strategy that she had successfully used for her so-called “gift!” Her connection with these students was such that she was able to repeat the same activity with 3 other groups that same week, without anyone spoiling the surprise.

From Psychology to Technology, with Pedagogy at Heart

As a teacher, Nicole had already integrated educational strategies that called on pedagogical uses of computers with the Laboratoire informatisé en psychologie software published by the CCDMD.

She would then go on to work in various professional capacities, all of which were in service to education:

The pleasure she gets from discovering and sharing what teachers are doing naturally brought her to start contributing to the Clic newsletter, where she published 3 inspiring portraits of teachers who are integrating technology into their pedagogical approach:

If you read these texts, you will see how computing and the use of educational technologies has evolved since that period. Incredible!

In 2004, Nicole became the community leader for the REPTIC network (Fédération des cégeps). Her dynamic personality, attention to detail, determination and enthusiasm, backed by a vast expertise, make her the a highly appreciated resource person in the field. What’s more, in the spring of 2017, the members of the REPTIC network regaled her with a surprise tribute. The word cloud that appears below will help you to “feel” the appreciation that the REPTICs and ministerial IT partners have for Nicole. 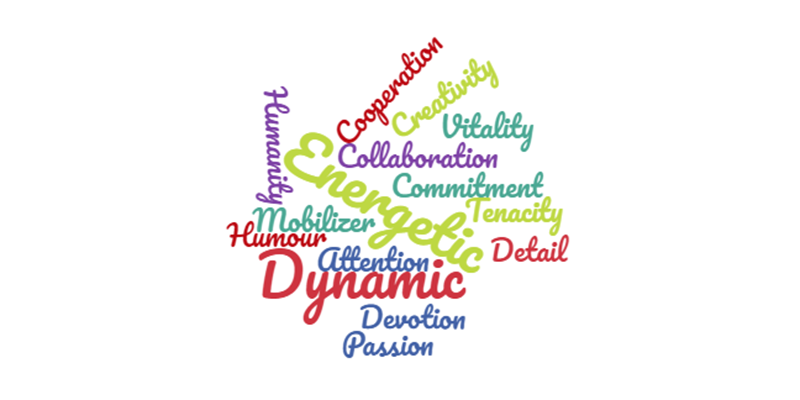 A word cloud that was assembled using the testimonials of appreciation that were collected as part of the surprise tribute to Nicole Perreault (Source).

How would you describe your contribution to a project?

What Interests Is She Pursuing Right Now?

Among the current REPTIC network projects, she mentions:

Strengths that Help Her Stand Out

Her contagious and limitless energy.

We would be remiss not to mention her mobilizing leadership!

“Tiguidou!” [Editor’s Note: Some words simply can’t be translated from one language to another. This is an excellent example! ‘Tiguidou!’ basically means ‘it’s all good,’ but also ‘great’ and ‘roger’ in the sense of CB lingo - all rolled into one!]

A Source of Inspiration in Her Professional Practice

The teachers, the students, and, evidently, the ICT Education Advisors from the REPTIC Network.

She’s a bit indulgent… since she reads so many Real Life Stories of teachers that are published by Profweb!

Not to have done enough, not to have adequately answered the needs.

Immediately following an in-person meeting of the REPTIC Network: Seeing the members of her network return to their college with their heads full of new ideas and hearing how much pleasure (as much professional as social) they had attending these meetings.

A Theorist that Left His or Her Mark?

Charles Darwin, a great researcher, but also a great communicator.

A Quotation that Steers Her Through Both Calm and Stormy Seas?

Curiosity leads to everything: Sometimes to listen through doors, sometimes to discover the Americas. J.M. Eça de Queiros

A Fictitious Literary Character that Could Have Been Inspired by Her 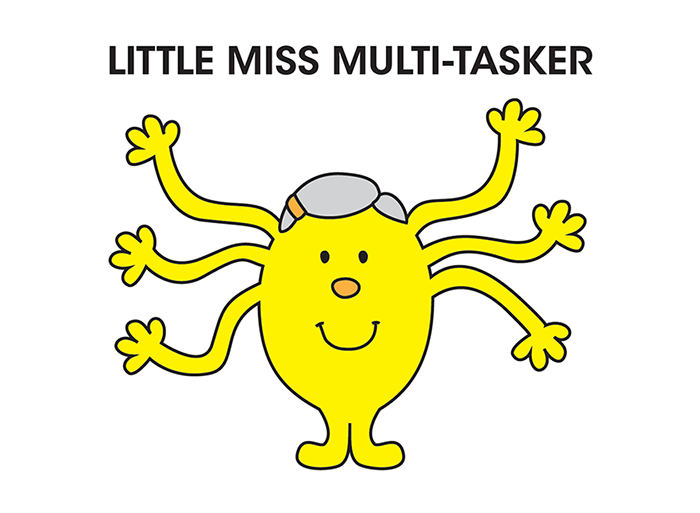 A nod from the team: If Nicole were a character from the Mr. Men, Little Miss series, we think she would be Little Miss Multi-tasker.

What Helps Her to Boost Her Creativity?

Nicole, the Profweb team would like to join with Huguette in awarding you the… "Federation" cup!