The 2012 edition of MoodleDay was held last Friday, May 11, and was unsurprisingly a huge success. It may seem a bit presumptuous to be so certain of success, but as the conference demonstrated, more and more people are using the Moodle learning platform in Quebec. 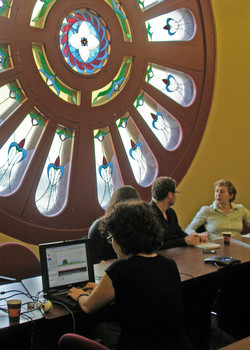 The proceedings took place under the glow of Dawson's signature rose window.

Currently in Quebec there are at least 40 cegeps using Moodle. The community of Moodle users is big, and DECclic is proudly responsible for at least part of this impressive growth.

MoodleDay’s welcoming address by Rafael Scapin, Dawson’s IT Rep harked back to 2008 when he arrived at the school and had to find a logical replacement for the numerous versions of WebCT that the college was running.

Afterwards, Jason Maur who is Dawson’s Moodle programmer explained the complexities of migrating Dawson from Moodle version 1.9.17 to Moodle 2.3 in August. Moodle cannot fully integrate into all student information systems, but Moodle’s plug-ins can do a lot to mitigate this reality. For example, Dawson has developed an add-on which generates a grade report that teachers can manually paste into Omnivox via a simple copy-paste.

Unwittingly, this topic broached the theme that was to be the thread that united all of the presentations.

The Challenge of Incredible Flexibility

In one way or another, each of the presenters marveled at what Moodle can do and touched upon the incredible amount of effort that they had expended in getting Moodle to do it.

A number of presenters discussed technology’s dehumanizing aspects. Raymond Cantin commented that when you are asynchronous, it’s even harder to create a humanizing connection, which is why he tries to meet synchronously at times. He said that the course shouldn’t be e-boring. Raymond, Roger Caissy and Norm Spatz all showed a number of designs that they created in order to stimulate interest. Various presenters explained features such as the calendar to post assignments and due dates, the glossary, a block to display an RSS feed, wikis and forums.

Many presenters had worked to maximize the multimedia aspect of their Moodle sites to help people with different learning styles to master the content. Raymond Cantin ended his presentation with his version of the day’s theme – The more time you put into developing your course, the less time you will spend answering questions about it later. 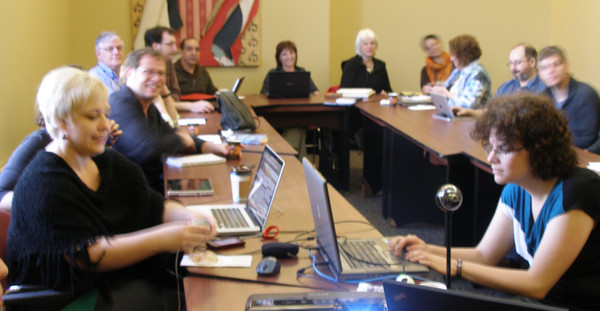 APOP's Évelyne Granger (right) moderates the online version of the proceeding as Paulette Cake and other participants listen raptly to the presentation.

Presentations by RogerCaissy, Nathan Loewen, and Profweb’s Norm Spatz all illustrated that Moodle is being adopted by more and more teachers in the Quebec College Network. Their presentations were all illustrations of the triumphs that Moodle can achieve in the classroom. Although there is not enough space in a Profweb column to give justice to each of the day’s presenters, the entire proceedings will soon be available online as MoodleDay was offered to the entire College Community through APOP.

I would like to personally thank each of this year’s presenters. Next year MoodleDay will probably be bigger than ever.

What would you like to see the DECclic Corporation do to make Moodle more present in the college community between now and then?