It's amazing how time has flown. At this date last year, the DECclic Corporation announced its move to Moodle. A few weeks later, we put up our experimental site without knowing how many teachers would take the plunge and what would happen when they did. We are now preparing our year-end report simultaneously with new Moodle sites to be launched in over 30 Quebec colleges. As election frenzy draws to a close, will Quebec's Orange Tide transform into Moodle Madness?

Here are some highlights of our year-end survey to which over 80 teachers and counselors, our early testers, responded anonymously in recent weeks. The results are extremely encouraging and, if need be, could summarize Moodle in two words flexible and convenient.

Over 86% of respondents had not used Moodle before this year. But, lack of experience and training did not seem to be an obstacle since the vast majority (76%) stated that the use of Moodle required little prior knowledge.

This is understandable given Moodle's level of simplicity and ease of use to create a course. Over 80% found that the basic functions of Moodle and the creation of a course were simple. 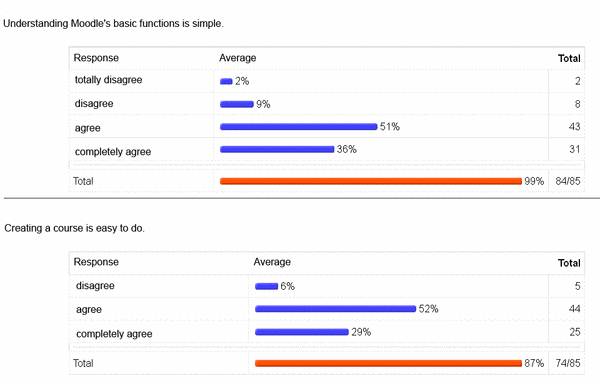 Understanding Moodle's basic functions is simple.
Creating a course is easy to do.

Moodle's interface is easy to use, one of the most desirable qualities in any software or online application.

The course interface is convinient for students.

Simplicity and usability are also two words that stand out in written comments when respondents were asked what Moodle's strengths were. What's better than a word cloud to highlight the positives? This is not scientific at all, but parenthetically, let me show you an interesting application, an online service for creating word clouds (wordle.net). 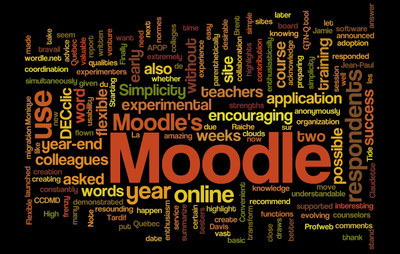 Satisfied Users and Word of Mouth

Finally, when respondents were asked if they would use Moodle for their next session and whether they would recommend it to their colleagues, the answer was, again, more than encouraging and demonstrated the enthusiasm aroused by this flexible, efficient and constantly evolving techno-friendly tool.

After a year, we can say that the first step of our migration has been a resounding success, a success which would not have been possible without the contribution of certain IT partners in this venture. I want to again acknowledge the invaluable collaboration of La Vitrine Technology Education and the Groupe de travail sur les normes du Québec (GTN-Q) for their valuable advice, as well as Profweb and the CCDMD that made the rapid adoption of our experimental site possible and APOP for our joint organization of online training.

I would also like to thank my colleagues in the coordination team of DECclic who enthusiastically came on board for Moodle and supported our early experimenters. Thanks are due to Claudette Ouellette, Jean-Paul Raîche, Monique Tardif, Brent Davis Reid and Jamie Bridge.