In late February 2018, Moodle users, developers, administrators and enthusiasts made the pilgrimage to Toronto’s York University for the 2018 edition of MoodleMoot Canada. Among the attendees were 2 members of the Quebec college network, François Lizotte (DECclic) and Rafael Scapin (Dawson College) who agreed to share some of their favourite moments from the conference.

According to the MoodleMoot web site, “MoodleMoot conferences are held around the world, with a focus on encouraging collaboration and sharing of best practices of the open source learning platform.”

This year’s event attracted attendees from Spain, Norway, Australia (including Moodle founder and CEO Martin Dougiamas) and a large contingent from the United States. Attendees from across Canada, including Nunavut, and a handful of stakeholders from higher education in Quebec travelled to Toronto to take part in the event.

For those of us who were not able to attend MoodleMoot Canada 2018 in person, a number of presentations were broadcast by the official event broadcaster and Moodle premiere integrator Blindside Networks (who created and maintains the free and open source BigBlueButton web conferencing system for education). Recordings of many of the  presentations can be viewed by visiting the conference schedule and hovering your mouse cursor over the title of each conference.

In my interviews with Francois Lizotte and Rafael Scapin, some key themes from the conference emerged, namely:

Rafael informed me that there are a handful of popular Moodle plugins for learning analytics, like Inspire and Intelliboard. Elizabeth Dalton, who is Moodle HQ’s Research Analyst, presented a pre-conference talk on learning analytics. She informed attendees that the Inspire plugin is integrated within the Moodle core for the 3.4 release. As for Intelliboard, they are one of only 2 entities that have been granted ‘premier integrator’ status by Moodle, given the important work they have done to ensure that their solution is tightly integrated with the learning management system. Both François and Rafael mentioned that the company is offering a free two-month trial for educational institutions that want to give the Intelliboard module a try.

Both François and Rafael were intrigued by another presentation given by Stephen Downes on Personal Learning Environments. In this presentation, he reminded the attendees that learning analytics are good, but Moodle can only track what happens inside Moodle, and may be missing important student experience data when deployed as part of a blended course. This gave both of our interviewees pause for reflection!

Making Learning Accessible for All Users

Traditionally, much of the discussion about on-line learning and accessibility centred on reaching remote students and providing them with opportunities for learning. Now, the spotlight is increasingly on learners with visual or auditory impairments.

François moderated a discussion on accessibility following a presentation by 2 educators from the Université Saint-Boniface in Manitoba. With new laws soon coming into force in that province that will oblige institutions to provide accessible learning content, the delegation from Saint-Boniface explained how they increased accessibility of their learning content on Moodle. There are a number or establishments in Quebec that are also concerned with accessibility, and this area of development will be an important one in the coming years.

François pointed out during our discussion that the adaptive nature of certain Moodle templates is related to the issue of accessibility. In fact, the page layout for courses in Moodle can change based on whether you are using a computer, tablet or smartphone.

And speaking of smartphones, a mobile app for Moodle arrived a couple of years ago which has had the reputation of being somewhat limited compared to the web-based version of Moodle. This no longer appears to be the case: 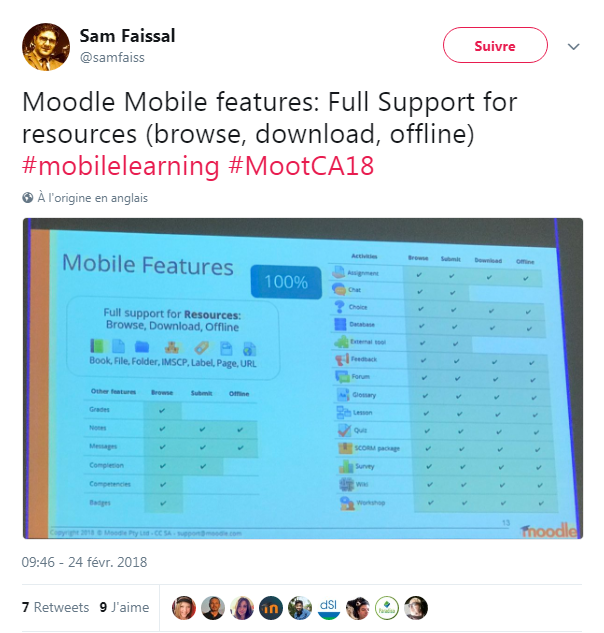 With the latest version of the Moodle App, 100% of the features that are part of the core installation of Moodle are now reputed to be functional within the mobile app.

The Future of Openness

Given that Moodle is free and open source software, it should not be surprising that a lot of focus during the MoodleMoot Canada conference shifted towards a discussion of open futures.

François Lizotte’s favourite presentation was delivered by David Porter, who is the CEO of eCampus Ontario. His presentation had the following evocative title: Making Open the Default: Moving Forward an Agenda of Open Education, Open Pedagogy and Open Practices in our Work. 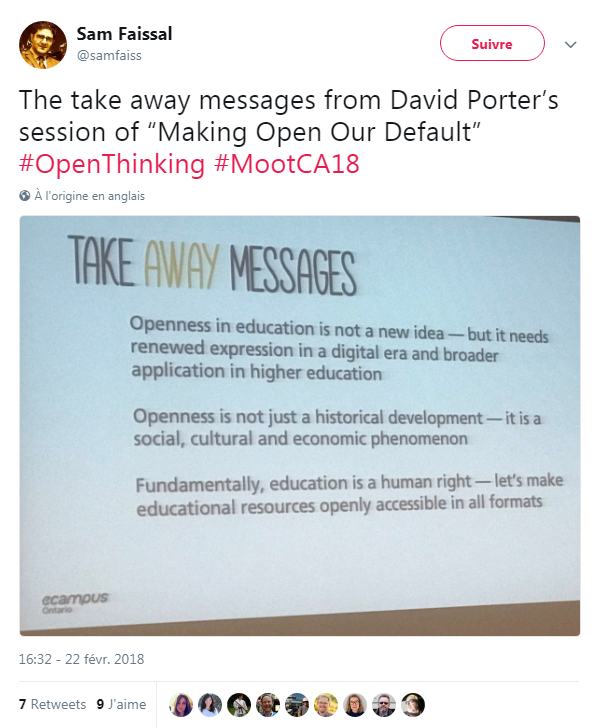 Some of the key points from David Porter’s presentation

Rafael was inspired by Martin Dougiamas’ keynote conference on the Future of Moodle. In this talk, Moodle’s founder and CEO connected the dots between Moodle’s open development and the 17 sustainable development goals promoted by the United Nations, not limiting himself to Goal 4, which is specific to education. Moodle will start looking at ways to integrate and deliver Open Educational Resources moving forward. 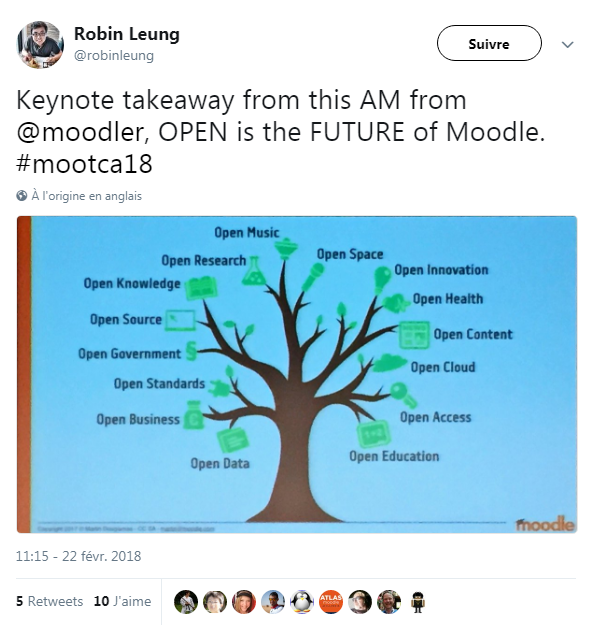 And speaking of open source software, both François and Rafael spoke to me about another presentation on H5P - an HTML5 plugin for interactive content that works on multiple devices. There are many interactive feature templates that can easily be edited by teachers according to their particular needs, such as quizzes (with multiple question formats), flashcards, video players, audio recording widgets, etc. The H5P project is open source, and has been integrated into the DECClic platform, as previously reported on my Profweb.

Leveraging the Power of a Community

The Moodle community seems to be going from strength to strength. As part of his keynote at MoodleMoot Canada 2018, Martin Dougiamas announced the arrival of MoodleNet - a Social Network for Educators that will help reinforce the links between the worldwide community of practitioners.

In terms of his final impressions of MoodleMoot Canada 2018, Rafael Scapin believes that the power of the event stems from the ability of educators to share how they are using Moodle with each other. When you listen to their stories, he says, it is very inspiring.

For François Lizotte, he finds it particularly enriching to witness the active Moodle community which is always focused on development. It is a community that is showing no signs of slowing down, and their ability to find partnerships and financing solutions to ensure a bright future is encouraging.

Thanks again to François and Rafael for sharing their experience at MoodleMoot Canada 2018 with the Profweb readership and turning us on to some of the informative and inspiring presentations!